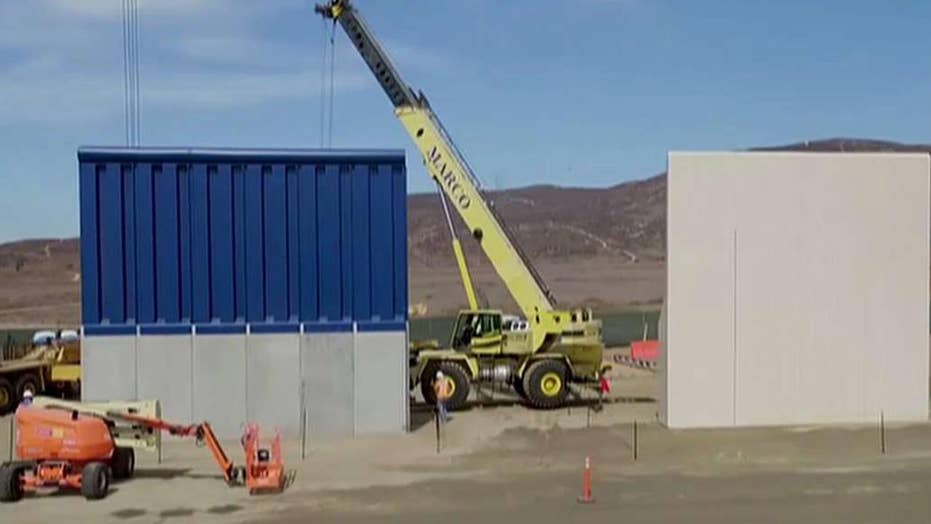 As President Trump pushes forward with his promised U.S.-Mexico border wall, companies competing for the chance to work on the multi-billion-dollar project are facing mounting boycotts from local Democratic lawmakers moving to blacklist the border builders.

Coordinated efforts have been launched in California, Arizona, Illinois, New York and Rhode Island that would prohibit cities and towns from doing any official business with the companies as part of a larger resistance strategy to delay construction of the controversial wall.

Most recently, Berkeley’s City Council in California approved an ordinance that would ban it from contracting with companies involved in the construction.

Arreguin called the border wall a “highly impractical response to America’s broken immigration system, and a symbol of hatred that will only further demonize the people of Mexican and Latin American descent.”

This follows a March measure approved by the council that would vet contracts to avoid business with border wall-affiliated companies. Earlier this month, the council expanded the policy to prohibit investment with companies involved in the “designing, building or financing” of the wall. The latest ordinance formalizes those rules.

'This is the worst kind of populism.'

— Brian Turmail, spokesman for the Associated General Contractors of America

“Our divestment policy is a message that we don’t want to do business with companies that seek to profit off of separating families, degrading the environment and heightening tensions with long-time partners such as Mexico,” Arreguin told Fox News.

Berkeley’s new mandate comes on the heels of a similar economic boycott that passed in Oakland last month.

In that case, the Oakland City Council barred the city from entering into new or amended contracts with companies that work with the federal government to build the border wall.

Construction, engineering, planning and information technology businesses are all subject to the ban. So are subcontractors and financial institutions.

Councilmember Abel Guillen said it is important to put “our dollars where our values are.”

A December committee proposal in Los Angeles -- still under consideration -- requires anyone wanting to do business with the city to disclose any bids they have made. However, it does not prohibit the city from entering into contracts with border builders.

It so happens that some of the cities boycotting these contractors have the kind of 'sanctuary' policies that the Trump administration is aggressively fighting.

"It's just amazing to me why any city would not want to rid itself of criminals who are also in the country illegally," Attorney General Jeff Sessions said earlier this month.

The Associated General Contractors of America told Fox News it has gone to the White House and Sessions, asking that they apply pressure and sue states and localities trying to deny contractors work based on their involvement building the border wall.

“This is the worst kind of populism,” Brian Turmail, spokesman for the AGCA, said. “Given the fact that this administration has been aggressively pursuing sanctuary cities, this seems like an easy slam dunk.”

He also accuses ambitious state and local lawmakers of trying to score political points off of contractors and says it sets a dangerous precedent.

“Today, it’s you don’t like the border wall while tomorrow you could have an anti-war mayor who refuses to work with defense contractors,” Turmail said.

At the center of the sanctuary city debate is California, which has also considered going after border wall companies at the state level.

“This is a wall of shame and we don’t want any part of it,” Assemblyman Phil Ting said in a written statement. “Californians build bridges not walls.”

Nearly 100 of the roughly 600 companies interested in bidding on the border project are based in California.

During a Cabinet meeting on Wednesday, Trump said he might soon head to San Diego where six construction companies have built eight border wall prototypes for U.S. Customs and Border Protection.

“I may be going there very shortly to look at them in their final form,” Trump told members of his Cabinet.

It remains unclear when the wall might actually go up. Trump campaigned on building it and set an ambitious timetable for construction. But aside from potential funding and political complications, there have been court challenges from geologists.

Critics also say the barrier would be ineffective and costly. On the campaign trail, Trump said Mexico would pay for the bill. That’s not happening. He also said the cost to build the wall would be $4 billion. Estimates have ranged wildly, but have since soared as high as $70 billion, though the actual cost is not clear.