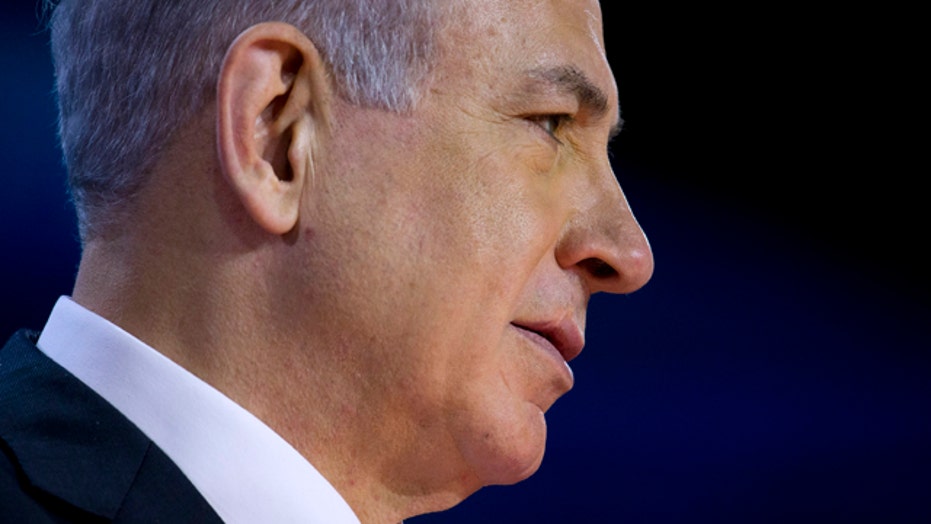 Several lawmakers say they will not attend the Prime Minister's speech

Israelis are increasingly convinced President Obama is meddling in their upcoming election, and some observers predict the White House's alleged effort to undermine Benjamin Netanyahu could indeed wind up tipping the scales – in favor of the prime minister.

Former Obama campaign workers have launched campaign teams throughout Israel that experts say are indirectly funded with U.S. State Department grants – and which are solely focused on ousting the prime minister, who has a well-chronicled adversarial relationship with Obama. While there is no concrete evidence Obama is personally pulling strings to undermine Netanyahu in the March 17 vote, polls show a strong majority of Israelis believe he is.

Ayalon said Secretary of State John Kerry signaled the start of the Obama administration’s election push against Netanyahu when he reportedly warned EU envoys at a private late December luncheon that they’d be helping the Israeli leader and the political right if they voted on a Palestinian statehood resolution at the UN at that time.

Then came news that the U.S.-based nonprofit OneVoice Movement – until recently headed by a member of U.S. Democratic administrations and recipient of some $350,000 in recent State Department grants – had entered into a “partnership” with the Israel-based “Victory 15” campaign – itself guided by top operatives of Obama’s own successful White House runs as it pushes its “replace the government” mantra.

“If anyone thinks they can influence the Israeli electorate from overseas, they are sorely mistaken.”

Things came to a head, said Ayalon, when the White House said Obama would not meet with Netanyahu when the Israeli leader – at the invitation of House Speaker John Boehner – came to Washington to address a joint session of Congress Tuesday on problems his government sees with administration-backed efforts to reach a nuclear weapons inspection deal with Iran.

“If anyone thinks they can influence the Israeli electorate from overseas, they are sorely mistaken,” Ayalon told FoxNews.com. “Israelis, like any people, (will) be defiant and oppose any hint or visibility of foreign interference in their domestic affairs.

“That is why this may actually produce a backlash.”

Chill relations between Obama and Netanyahu are no secret, but allegations of U.S. administration meddling in Israel's election could take the animosity to a new level. (AP)

A poll this week has already shown Netanyahu’s center-right Likud Party holding sway as its main rival – a center-left alliance called Zionist Union – faltered. This comes a little more than a week after a Jerusalem Post/Maariv Sof Hashavua poll showed that 62 percent of 589 Israeli respondents believed the Obama administration was interfering in the election.

“Any American intervention in the Israeli elections helps Likud,” said Prof. Eytan Gilboa of the Begin-Sadat Center for Strategic Studies ("BESA Center") at the Bar-Ilan University in Israel.

”There are a number of traditional voters of Likud who have had reservations about Netanyahu, but this kind of intervention…enflames and angers (people), who say, ‘So this is what you want? Well, you’re not going to get it.’”

Gilboa said voters in the political center, as well as current undecideds, could also be driven to supporting Netanyahu as a form of subliminal protest against perceived Obama administration meddling.

“You have an accumulation of six years of real animosity between Netanyahu and Obama,” Gilboa said of the men, who both began their current runs in office in early 2009. “Many people of the right and at the center believe that it was not Netanyahu [who was responsible for the rift], it was Obama, with his world view, with his misunderstanding of the entire Middle East, with his quoting of extreme Muslims.”

OneVoice bills itself as a non-partisan organization working for a two-state solution to the Israeli-Palestinian conflict and V15 is actively campaigning against Netanyahu's re-election. Israeli media have widely reported on their activities, which include operating from adjacent offices in Tel Aviv. Still, proving the groups are working together on election matters in a way that would violate either country's laws requires more than proximate offices or even shared leadership.

Former Israeli ambassador to the US Danny Ayalon says voters in the Jewish state resent what some believe is White House meddling in the upcoming elections. (File photo)

“They are very careful not to violate Israeli election laws, so there is some kind of lacuna there that really allows them to operate,” he said in respect to restrictions limiting foreign financing of Israeli election campaigns.

The State Department has denied the money it gave to OneVoice has been applied to V15’s campaigning, but the assertion is questioned by an internationally respected watchdog that tracks money flows to unmask non-governmental organizations that deviate from their stated human rights or humanitarian agendas.

“All money is fungible,” Gerald Steinberg, founder and president of NGO Monitor, told FoxNews.com from Israel. “It pays for your staff, your salaries, your rent of your office, your web site, your social media, and all sorts of other things (like) travel. So whenever a donor says, ‘We only provide money for a certain project,’ that’s a fiction.”

The OneVoice Movement, launched in 2002 by snack bar mogul Daniel Lubetzky and boasting the star power of such celebrities as Brad Pitt, Danny DeVito, Rhea Perlman and Sir Paul McCartney among its honorary advisors, was headed until last November by Marc Ginsberg, who advised President Carter on Middle East Policy and served as President Clinton’s ambassador to Morocco. Ginsberg, a former Fox News contributor, said he resigned as CEO three months ago, and, although his active Twitter account still identifies him as such, said he is now a “senior advisor.”

His communications staff said he would not speak to FoxNews.com directly about OneVoice’s links with V15, but he has described the Obama administration’s approach to the Israeli-Palestinian conflict – an approach to which Netanyahu has been cool – as a “window of opportunity.”

The group focuses on Israel’s 1967 borders as a starting point for negotiating a final settlement, which parallels Obama’s thinking, but runs counter to Netanyahu’s.

Former US Ambassador to Morocco Marc Ginsberg, shown here in an appearance on Fox News Channel, heads OneVoice, which has received $350,000 in grants from the US. (Fox News Channel)

OneVoice is barred by U.S. law regulating its tax-exempt status from directly targeting Netanyahu, and doing so would threaten that status. But in its 2014 Annual Report, the nonprofit said its Israel branch would be “embarking on a groundbreaking campaign around the Israeli elections.”

OneVoice said in a January press release announcing the partnership that V15 “only accepts support from Israeli patriots and staunch international friends of Israel with unassailable track records of supporting Israel's security and prosperity.” Among four private donors mentioned is Danny Abraham – an American billionaire known for Slim Fast diet products, but also a major contributor to Democratic committees and campaigns, including Obama’s.

While the State Department documents show that the grant periods ended last November, it was just a short time later that OneVoice emerged publicly as V15’s partner. At the same time, Jeremy Bird, who served as Obama’s deputy national campaign director in 2008, and his national campaign director in 2012 arrived in Israel to help direct V15. Bird brought with him additional former Obama campaign operatives to help V15 achieve its goal of knocking on one million doors to make the case for a change in Israel’s leadership.

Republican lawmakers Sen. Ted Cruz, of Texas, and Rep. Lee Zeldin, of New York, have called on the State Department to answer concerns they have about the agency grants. In a Jan. 29 letter to Secretary of State John Kerry, they called for an answer within 15 days on whether U.S. taxpayer dollars were “being used to fund efforts to influence upcoming elections in Israel.”

Though the majority of Israelis polled believed there was Obama administration interference in the election, 31 percent of those questioned for the Jerusalem Post/Maariv Sof Hashavua poll – which reported a margin of error of 4.5 percentage points – said they sensed no interference – while eight percent said they did not know.

“The(y) are almost without doubt people who want Netanyahu to be defeated,” said Jonathan Spyer, research fellow at the Global Research in International Affairs (GLORIA) Center in Herzliya, Israel.

“The revelations mean that V15 which, in its very style and name, comes across as an alien presence on the Israeli scene, is unlikely to have the effect that its creators desired.  And that’s good for Israeli democracy, whether or not you want to see Netanyahu re-elected.”

Independent investigative journalist Adi Ben Hur is just as blunt, arguing in the online magazine Mida: “Democracy means rule by the people, and (any) intervention of foreign countries is nothing short of subversion.”