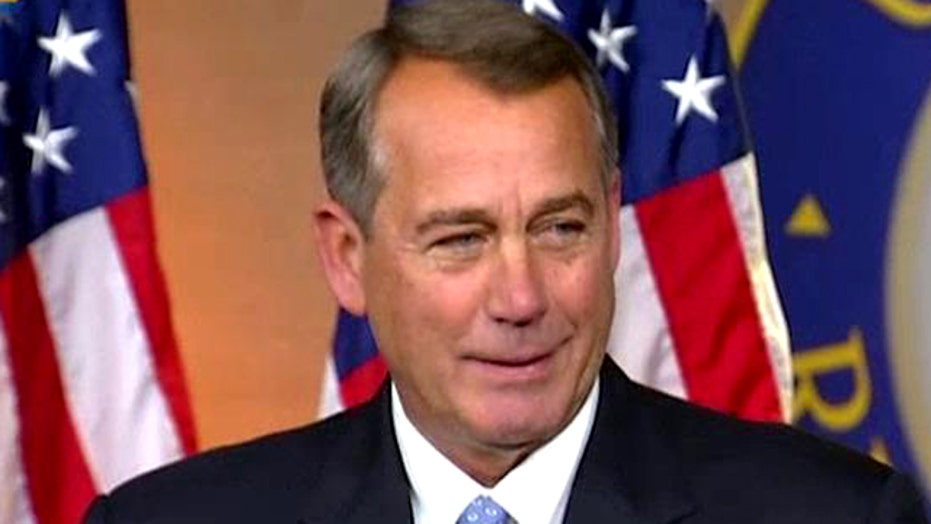 House Speaker John Boehner issued a stern warning to President Obama not to use executive action to bypass Congress on immigration, telling the president on Thursday "he's going to burn himself" and "poison the well" if he goes down that path.

The warning comes ahead of a major summit at the White House where Obama will meet Friday with congressional leaders of both parties. The meeting is the first chance since Republicans won a majority in the Senate -- and built their majority to historic levels in the House -- for all sides to sit down and discuss a potential agenda for next year.

Boehner and presumptive Senate Majority Leader Mitch McConnell began to lay out their agenda items on Thursday, but the House speaker blasted Obama for a day earlier vowing to pursue executive action on immigration before the end of the year.

"If he acts unilaterally on his own, outside of his authority, he will poison the well and there will be no chance of immigration reform moving in this Congress," Boehner said.

Obama said Wednesday he still wants Congress to pass legislation and promised that if Congress passes a bill, it would make any executive actions "go away."

But Boehner said the issue has become a "political football." Obama is said to be looking at suspending deportations for millions. To the president, Boehner said: "When you play with matches, then you take the risk of burning yourself, and he's going to burn himself if he continues to go down this path."

Boehner, meanwhile, said the House once again would vote next year to repeal ObamaCare. With Obama already having vowed to veto any such repeal, Boehner said there might still be bipartisan support for undoing parts of the law -- like the unpopular medical device tax.

He laid out several other agenda items, including approving the Keystone XL oil pipeline, overhauling the tax code, addressing the debt and more. He and McConnell outlined several of these items in a Wall Street Journal op-ed on Thursday.

Meanwhile, Boehner and McConnell both will have to run for their leadership posts next year and have been touting their successes in recent days.

Boehner has the more unwieldy caucus; in the last party election, nine rank-and-file Republicans defected on the vote.

According to his political office, though, Boehner helped raise $102 million for the cycle; visited 175 cities and held 150 "road events" for candidates and members; and headlined several rallies and fundraisers in the closing weeks of the campaign.

His office also noted the historic gains made by House Republicans -- under Boehner -- echoing predictions that when all the races are counted, the House GOP will have their biggest majority since 1930.

The full House will vote for speaker at the start of the new Congress in January. The last time, Boehner narrowly missed having the vote go to a second ballot for the first time since the 1920s -- both parties vote on the floor for speaker, and the winner must get an absolute majority of all ballots cast.