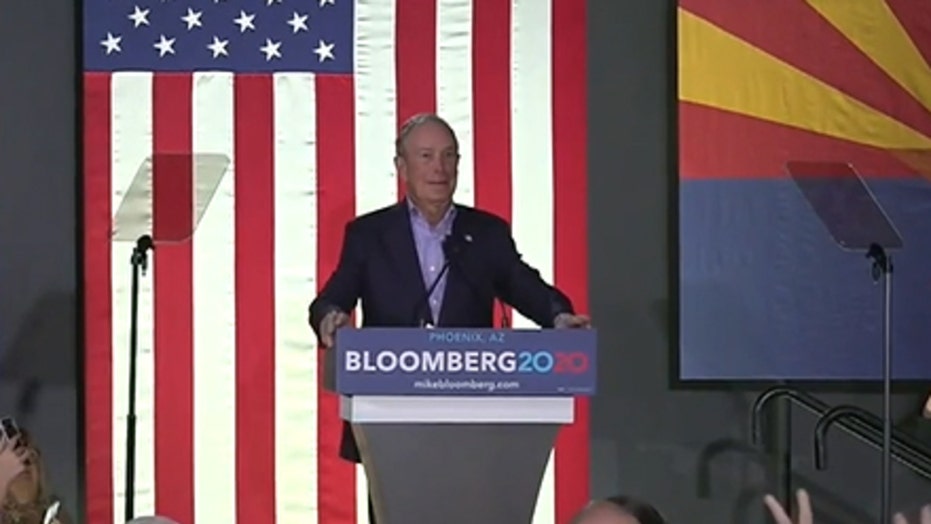 How Bloomberg used his wealth to change Democrat debate rules

Michael Bloomberg is spending like no other presidential candidate has spent before.

The former New York City mayor and multibillionaire business and media mogul has pumped hundreds of millions of dollars of his own money in less than three months into carpeting the country with ads on TV and social media and building up a massive Democratic presidential campaign team in 43 states and territories.

Bloomberg – who’s ranked by Forbes as the eighth richest person in the country – told reporters last month that the “number one priority is to get rid of Donald Trump. I’m spending all my money to get rid of Trump.”

It’s far from all his money – he's worth some $64 billion – but it is a massive figure.

As of last week, Bloomberg’s shelled out more than $344 million since declaring his candidacy in late November to run ads on TV, Facebook and Google, according to figures from Advertising Analytics, a well-known ad tracking firm.

That’s more than twice the roughly $186 million spent since last July by Tom Steyer, the other billionaire in the race for the Democratic presidential nomination.

Bloomberg’s also digging into his deep pockets and spending millions more to build up an eye-popping campaign organization.

As of this week, Bloomberg’s 2020 campaign has 2,400 staffers, with 2,000 located across the country and 400 at his New York City headquarters. And he’s opened 150 campaign field offices.

Because he jumped into the race so late, Bloomberg decided to skip campaigning in the four early states of Iowa, New Hampshire, Nevada, and South Carolina, which kick off the presidential nominating calendar and hold their contests in February. Instead, he’s concentrating on the delegate-rich Super Tuesday states that hold contests on March 3 and beyond.

“Our campaign has built a nationwide organization that is engaging voters daily about Mike’s record of taking on tough fights and why he is the strongest Democrat in the race," noted campaign spokesperson Galia Slayen.

Veteran political scientist Wayne Lesperance highlighted that “Bloomberg’s candidacy for the presidency is unprecedented, having spent nearly $200 million in the five weeks of last year."

“Voters will ultimately decide if a candidate can win based on the strength of their wallet and not on the sustained daily interaction with voters on the campaign trail,” added Lesperance, the New England College vice president of academic affairs.

And Bloomberg’s free to spend as much money as he likes on his White House bid.

There are currently no limits or restrictions on how much of their own money a federal candidate can spend on their campaign for office.

Bloomberg's spending versus everybody else

Even if now outdated, the most recent fourth-quarter campaign finance filings underscore the vast difference in spending between Bloomberg and the other campaigns. This is what the numbers show the campaigns spent that quarter as of the end of December.