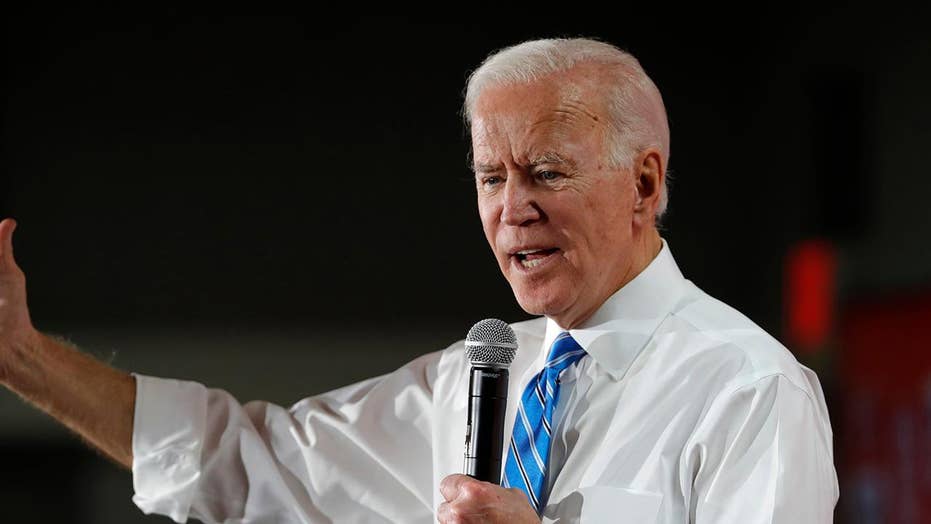 Former Vice President Joe Biden said Thursday that Sen. Elizabeth Warren, D-Mass., would take the unorthodox approach of ruling “by executive order,” if elected president after she scoffed at the idea of working together with Republicans to unite the country on a slew of her progressive policy proposals.

Top-tier Democratic rivals have begun swiping at each other amid tightening polls ahead of February's presidential primary and caucus in New Hampshire and Iowa, respectively, when the 2020 election season -- and the battle to take on President Trump next November -- gets underway in earnest.

Biden, who trailed Warren and Sen. Bernie Sanders, I-Vt., in a University of California at Berkeley poll released this week, made the remarks about Warren at a fundraiser in the San Francisco Bay Area -- one of three such events he had scheduled for the day  in one of the Democratic Party's stronghold regions. He took aim at Warren without mentioning her by name.

“I read a speech by one of my — good person — one of my opponents, saying that, you know, 'Biden says we’re going to have to work with Republicans to get stuff passed,’” Biden said in Palo Alto. “I thought, ‘Well, OK — how are you going to do it, by executive order?’”

Biden seemed to react to a comment made earlier in the day in New Hampshire by Warren who -- also without naming her targets – took aim at Biden before refocusing her remarks on an opponent they have in common, South Bend, Ind., Mayor Pete Buttigieg.

“We know that one Democratic candidate walked into a room of wealthy donors this year to promise that ‘nothing would fundamentally change’ if he’s elected president,” Warren said of Biden during her address at the New Hampshire Institute of Politics at Saint Anselm College.

Referring to Buttigieg, she continued: “Unlike some candidates for the Democratic nomination, I’m not betting my agenda on the naive hope that if Democrats adopt Republican critiques of progressive policies or make vague calls for unity, that somehow the wealthy and well-connected will stand down.” 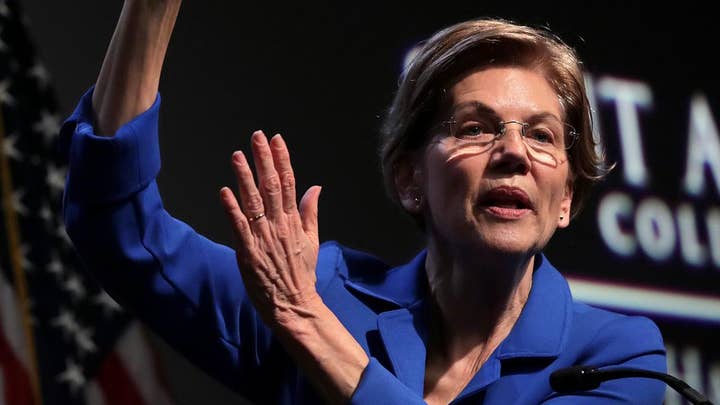 Warren -- who has eschewed fundraisers with top-dollar donors during her presidential bid as she instead focuses nearly entirely on small-dollar grassroots contributions -- once again criticized Biden and Buttigieg for mingling with wealthy donors.

Though ranking third in California, Biden remains the narrow Democratic front-runner in national polls, according to the Mercury News of San Jose. Biden also is capitalizing on big-money donors in Silicon Valley after their home-state Sen. Kamala Harris, D-Calif., dropped out of the primary race, according to a report in Politico this week.

On Thursday, Biden appeared at an event at the home of Sarah and Greg Sands, founder of the venture capital firm Costanoa Ventures. He then attended a fundraiser in San Francisco hosted by Sen. Dianne Feinstein, D-Calif., and her husband, financier Richard Blum, before heading to a third event across the city hosted by attorney Joe Cotchett, the San Francisco Chronicle reported.

Biden took heat from Warren and Sanders in October for forming a super PAC to accept unlimited donations from billionaires and corporate elites to cure his fundraising woes. He had previously promised not to accept super PAC donations when he first announced his candidacy in April.

According to the Federal Election Commission, Biden raised $38 million from April through September. That figure means Biden falls in fifth place when it comes to fundraising dollars among Democratic presidential candidates. He has only raised about half as much as Sanders, who does not accept super PAC donations.

Biden’s campaign also has struggled with shortcomings in available cash on hand. The most recent federal fundraising report said he has just $8 million in cash on hand compared to Sanders’ $33 million, Warren’s $25 million and Buttigieg’s $23 million.

Democrats are also now contending with the seemingly limitless potential funding of campaign newcomer Michael Bloomberg, a multibillionaire who joined the race in late November -- though the former New York City mayor has struggled in the polls.