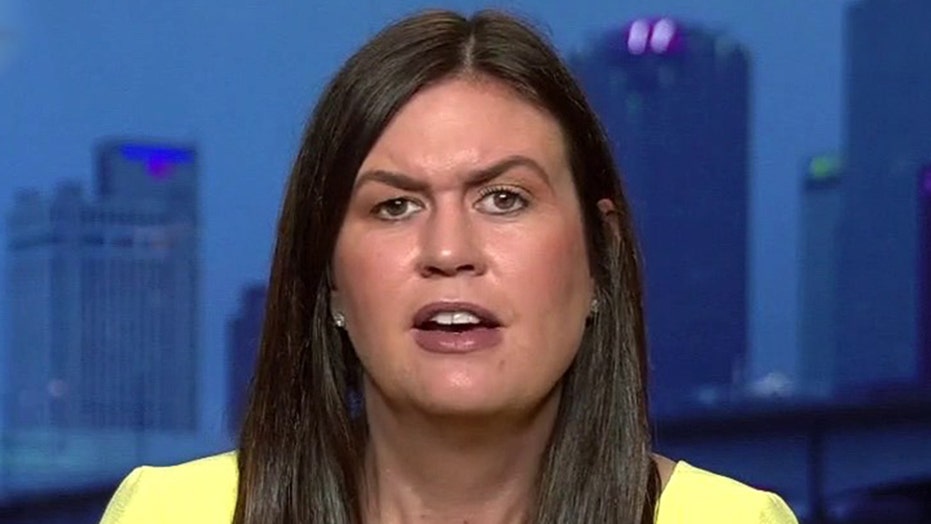 Democratic presidential nominee Joe Biden does not have a lot of credibility to support law and order at this point in the campaign, Fox News contributor Sarah Sanders said Wednesday.

The former White House press secretary said the only reason the former vice president came out against the riots in Democratic-run cities was because of tightening polls against President Trump.

"That's a matter of convenience, not a matter of conviction, and that is not who you want in charge of our country, in a moment like this," Sanders told "Fox & Friends" on Wednesday.

"It's a contrast of law and order or the liberal mob, who do we want to be in charge, and there's only one choice when it comes to law and order and that's President Trump," she added.

Sanders took a shot at the Democratic vice presidential nominee, Sen. Kamala Harris, D-Calif.: "Joe Biden's running mate was literally fundraising to bail out rioters from jail. I think it's a very hard shift. I think he's going to have a hard time convincing people."

Reacting to Trump's nomination for the 2021 Nobel Peace Prize weeks after he brokered a peace deal between Israel and the United Arab Emirates (UAE), Sanders called it "well deserved," especially compared to former President Barack Obama's Nobel in 2009.

"President Trump has actually defeated the ISIS caliphate liberating millions and also worked with Israel and its neighbors to create historical peace deals," she explained. "I think it's well-deserved and it's a great thing ... this individual has nominated him."

The author of "Speaking for Myself: Faith, Freedom, and the Fight of Our Lives" shared about her time in the Trump administration.

"The entire liberal media elites were coming after the president and his team every single day," Sanders said. "Members of his staff, myself included, kicked out of restaurants, nothing was off limits. Whether it was our personal appearance, our fitness to be a parent, everything was on the table when it came to the attacks that the liberals were willing to throw at us, but thankfully the president stayed strong, fought back and he also empowered the rest of us, and defended the rest of us that supported him."