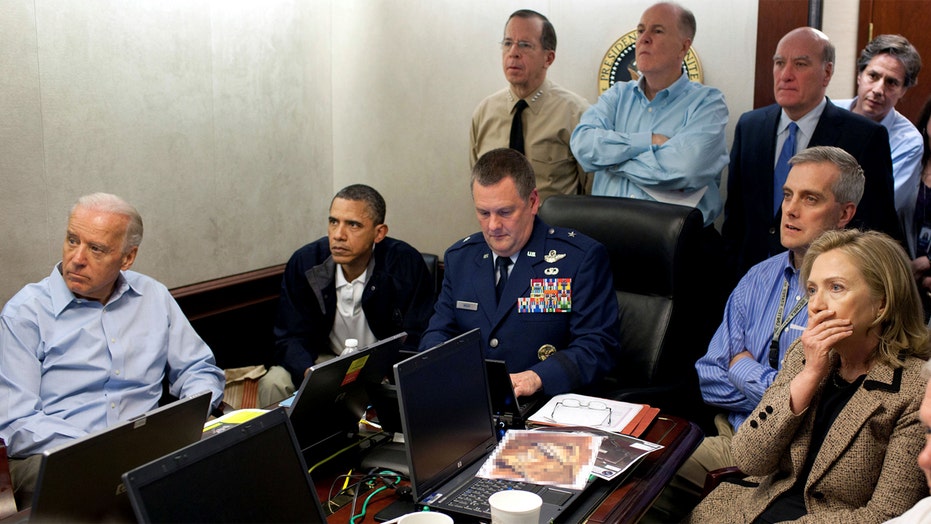 Biden claims he backed raid to kill Bin Laden all along

Vice President Biden on Tuesday seemed to contradict Hillary Clinton's account of the 2011 raid that killed Usama bin Laden, while also changing his own account of the advice he gave President Obama before the commander-in-chief approved the risky, and ultimately successful, mission.

Biden spoke about the raid at a forum honoring former Vice President Walter Mondale. Without naming Clinton, he effectively contradicted her claim that she firmly backed the raid from the beginning. In his remarks, he said that only then-CIA chief Leon Panetta was in favor.

“There were only two people who were definitive and were absolutely certain. Leon Panetta said go, [Defense Secretary] Bob Gates … said don’t go. Others were at 59-41,” Biden said.

Clinton, the Democratic presidential front-runner and former secretary of state, has claimed she recommended to Obama that he "go ahead," while his advisers "were split."

The VP comments come as Biden weighs whether to enter the 2016 Democratic presidential race. It's unclear whether Biden intentionally challenged Clinton's account, or simply offered an inadvertently flawed retelling of events.

Biden on Tuesday also contradicted his past recollections of the deliberations, telling the forum that while he privately supported the raid, he didn’t want to say so in front of everyone else as it risked "undercutting" his relationship with Obama if the president decided against the raid.

Biden said he only advised Obama to go ahead when the two were alone -- after advising in a Cabinet meeting that there should be another pass with a surveillance drone to make sure bin Laden really was at the compound.

"As we walked out of the room and walked up the stairs, I told him my opinion that I thought he should go but to follow his own instincts,” Biden said. “I never, on a difficult issue, never say what I think finally until I go up in the Oval with him alone.”

However, Biden previously described himself as on the fence on the bin Laden raid decision.

In 2012, Biden told House Democrats he had cautioned Obama against going forward with the raid, and he said in a television interview that year that he'd advised waiting until the military could better determine whether bin Laden was truly in the compound at Abbottabad, Pakistan, but made no mention of telling Obama privately to go ahead with the mission.

In May 2011, Biden said at a Democratic fundraiser in New Hampshire that he was one of those who “hedged their bets.”

“Ladies and gentlemen, I said ‘wait another seven days for the following information,’” Biden said, but made no reference to the alleged private conversation.

Biden's office declined to comment publicly, but Bill Daley, who was Obama's chief of staff during the raid, told reporters at the Mondale event that Biden's depiction of the Situation Room meeting was accurate. Daley wasn't present for any side conversation between Obama and Biden.

White House Press Secretary Josh Earnest was asked multiple times Tuesday about what advice the president was given by his vice president, but Earnest refused to be drawn into the controversy despite multiple questions on the subject.

The apparent story change comes amid reports that Biden is poised to enter the race for the 2016 Democratic nomination for the White House.

If he runs, Biden's recollection of what played out behind the scenes of the bin Laden raid would likely face additional scrutiny -- particularly from Clinton, who has touted her support for the raid as an example of Obama trusting her judgment on national security.

Fox News’ Kelly Chernenkoff and The Associated Press contributed to this report.