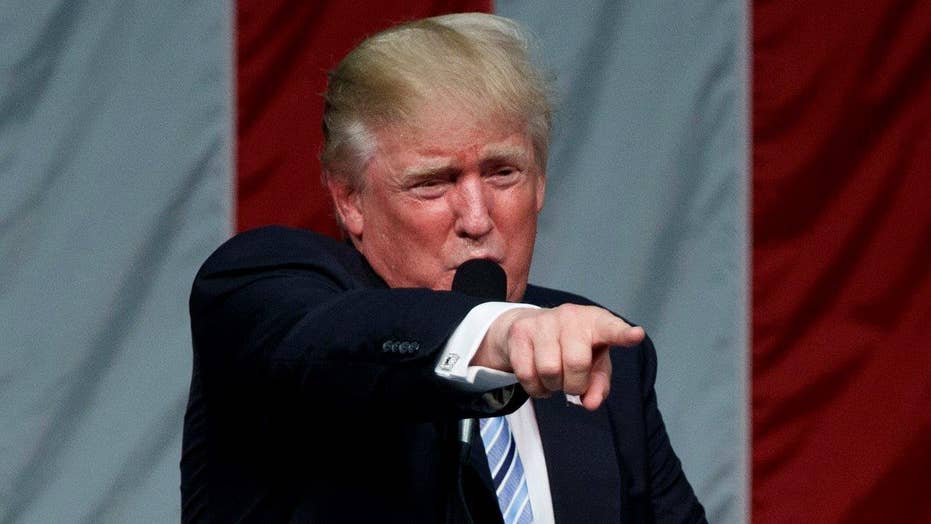 Chris Matthews was outraged when Donald Trump said Hillary Clinton and President Obama were the “founder(s) of ISIS,” but two years ago, the NBC newsman offered up his own theory as to who created the terrorist group -- Dick Cheney.

Matthews may have forgotten that he was once guilty of similar hyperbole. (Associated Press)

"You know, I don't think I've ever seen anything quite like this," Matthews said.

It is possible Matthews forgot the words he spoke on Sept. 10, 2014, when he followed an address by President Obama detailing plans to bomb ISIS with some advice for the commander-in-chief. The Media Research Center’s Newsbusters website was there to remind him.

Trump says he did not mean Clinton and Obama literally were "founders of ISIS.: (Associated Press)

"Please do not listen to (former Vice President) Dick Cheney," Matthews said. "He's the one that created Al Qaeda by taking over the holy land in Saudi Arabia. He's the one that de-Baathicized [sic] the Iraqi government. He created ISIS, and he's coming back again with more advice."

Trump took heat from Democrats and the media for calling Clinton and Obama “founders” in blaming their policies for a Middle East vacuum that allowed the terrorist group to arise. Trump’s surrogates were forced to explain that the GOP presidential nominee did not mean Clinton and Obama “filled out paperwork” for a terror startup.

“No, he was not saying that President Obama personally went to the Middle East and filled out the paperwork that incorporated ISIS. That's obviously not what he's saying," Trump campaign spokeswoman Katrina Pierson told MSNBC on Friday. "But what he is saying is that Hillary Clinton and Barack Obama had the intel that they needed to make decisions, particularly arming the rebels in Syria, which turned out to be ISIS, and as Gen. Flynn reports, they ignored that willingly and created ISIS."

Ratings challenged @CNN reports so seriously that I call President Obama (and Clinton) "the founder" of ISIS, & MVP. THEY DON'T GET SARCASM?

Trump himself doubled down initially and said he meant exactly what he said. But on Friday, he made clear that he and Pierson were on the same page.

"When I said that Obama -- and of course I’m being sarcastic,” Trump said at a rally in Erie, Pa., Friday. “And they know that. Because after I said that, I said he’s the MVP.

"So I said, ‘the founder of ISIS.’ Obviously I’m being sarcastic," he continued. "Then, then -- but not that sarcastic, to be honest with you."

ISIS’ roots are in a terroist group formed in 1999 called Jama'at al-Tawhid wal-Jihad, which was formed as the Iraqi franchise of Al Qaeda. But it split from the 9/11 terror group and began calling itself Islamic State in June 2014. Critics of the Obama administration policies say the rapid pullout of U.S. troops following defeat of the Iraqi insurgency gave ISIS room to grow into the world’s most feared terrorist group.

Well, the Associated Press, called Trump's claims patently false. ISIS was formed as the local Al Qaeda franchise in Iraq after the invasion. Its founding preceded this president's tenure, as well as Hillary Clinton's time as secretary of state.

Matthews stayed outraged as he asked NBC reporter Hallie Jackson: "Hallie, you're a reader of this guy. Help me read him. Why is he pushing this founder of ISIS, not even the explanation (conservative interviewer) Hugh Hewitt tried to help him with. No, founded, literally founded ISIS. Why does he insist on that?"

As opposed to Chris, who said Cheney "created" ISIS, which is so much different than "founded." [?] Both Trump and Matthews are rhetorically reckless, but the liberal media are only outraged by one half.