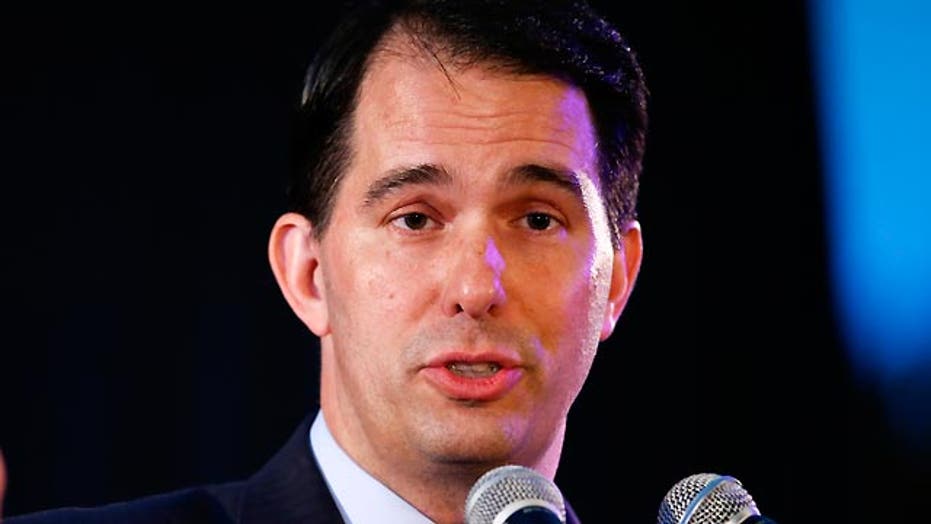 Cutting the ribbon on a new facility in Waukesha, Wis., local businessman Gunner Lyslo told Gov. Scott Walker, "Maybe this is something you will do in the White House."

Ever the savvy politician, Walker lifted up both palms, as if to push away the notion. "I had to work pretty hard for this job," he said.

In fact, Walker has to work pretty hard to keep his current job.

Though the Wisconsin governor soundly won the recall fight of 2012 -- and boasts that on his watch unemployment has dropped from 9.2 percent in 2010 to 5.8 percent -- this year's reelection is no cakewalk.

That's because, after his very public fights with state unions and other controversies, there are some people in Wisconsin who just despise him.

"They are essentially the 47 percent who will vote for the devil, they don't care who is on the ballot, they'll vote against Scott Walker," said Mordecai Lee, political science professor at the University of Wisconsin-Milwaukee.

Lee's assessment is backed up by a Marquette University Poll released on Wednesday showing Walker and Democratic challenger Mary Burke tied at 46 percent. The percentage of undecided voters is a mere 5 percent.

The governor was boosted in the 2012 recall by many people who were against using the recall as a political weapon, but not necessarily pro-Walker.

"I've been saying for more than a year that -- not all, but at least some of that margin of victory two years ago was reflective of people who voted against a recall in principle, not necessarily against a candidate," Walker said, acknowledging that some of those voters might not be there for him in November.

Walker still has to battle the unions, particularly the American Federation of State, County and Municipal Employees.

"We have a score to settle with Scott Walker," Lee Saunders, president of AFSCME, told The Washington Post.

The vendetta all traces back to Wisconsin Act 10, which stripped state employee unions of their collective bargaining power, made membership optional and forced state employees to pay into both health care and retirement. That was the grand act that sent Democrat lawmakers fleeing to Illinois to prevent a vote and filled Madison with angry demonstrators.

While Act 10 still generates motivation for the unions to get some pay-back, it was largely cemented by the recall election.

Leading up to November, it's not the front-and-center issue.

Like most gubernatorial contests, the hot topics are: jobs, growth and taxes. Burke has thus far pounced on Walker falling short of a promise to create 250,000 jobs. Walker counters that in the process, Wisconsin's employment still grew by 100,000 jobs.

But it's not enough to mute the criticism. "Coming out of the deepest recession since the Great Depression, every state created jobs. But the reality is that Wisconsin is lagging behind," Burke spokesman Joe Zepecki said.

Both campaigns are being very careful, and neither wants to make the mistake that sends even the smallest percentage of undecided voters to the other side.

When President Obama made a Labor Day visit to the Badger State, Walker -- not wanting to be seen as a Tea Party stalwart snubbing the president -- greeted Obama at the airport.

For Burke, a photo-op with the president could have been toxic, and she didn't show up.

In a state that was thrust onto the national platform because of its nasty political divide, the race is nevertheless surprisingly polite.

A court ruling out of Chicago could impact the final outcome.

A federal appeals court dissolved the injunction against Wisconsin's voter ID law, so an ID will be required to cast a ballot. And while most voters are expected to have a valid ID by Election Day, the perception is that most who don't are Democrats.