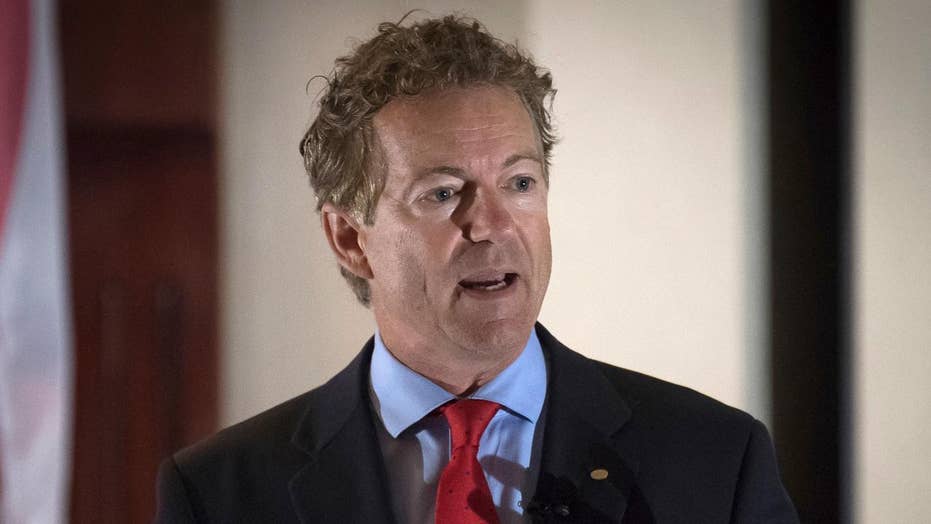 Raw audio: Kentucky senator calls the police after being attacked by his neighbor.

Authorities in Kentucky released audio of Sen. Rand Paul's 911 call Monday, in which the Republican reported that he "was assaulted by my neighbor" this past November.

Paul, who can be heard breathing heavily on the audio, tells the dispatcher that the incident is "not a life-or-death thing, but I'd like to have a police car come by." He gives his full name, Randal Paul, when asked by a second dispatcher and tells her that he was attacked "in my yard, while I was mowing the grass."

The audio was made public on the same day it was revealed that federal prosecutors would seek a 21-month prison sentence for the man accused of attacking Paul outside his Bowling Green, Ky., home Nov. 3.

In comments to police, Rene Boucher indicated the attack on Paul was not politically motivated, according to a court document filed by prosecutors. Instead, it had to do with a dispute over yard maintenance that boiled over.

Boucher said he saw Paul stacking more brush onto an existing pile and had "had enough." Boucher made a "running tackle" of Paul in the lawmaker's yard, it said.

The document said Paul "did not see the attack coming until the last second, and was unable to brace for the impact."

Paul suffered several broken ribs in the attack and later developed pneumonia. Paul has since said he's recovering well from the attack.

Boucher has been charged with assaulting a member of Congress as part of a federal plea agreement that surfaced last Friday.

While federal prosecutors will recommend a nearly two-year prison sentence, Boucher's attorney said Monday he will argue that his client should not serve any jail time. Attorney Matt Baker said his client is "a good and a decent person" who made a "big mistake."

"Everyone needs to remember, first and foremost, that this is a dispute between two neighbors," Baker told the Associated Press in a phone interview. "It was not and has never been politically motivated. And if this very same incident had occurred between two private persons, neither of whom were a congressman or a senator, we wouldn't be in federal court."

Boucher is "very meticulous" about how he maintains his yard, while Paul takes "a much different approach" to the upkeep of his property, Baker said last week.

The federal charge against Boucher carries a punishment of up to 10 years in prison and a $250,000 fine.

The plea deal also raises the prospect that Boucher — a retired anesthesiologist in his late 50s — will pay restitution to Paul.