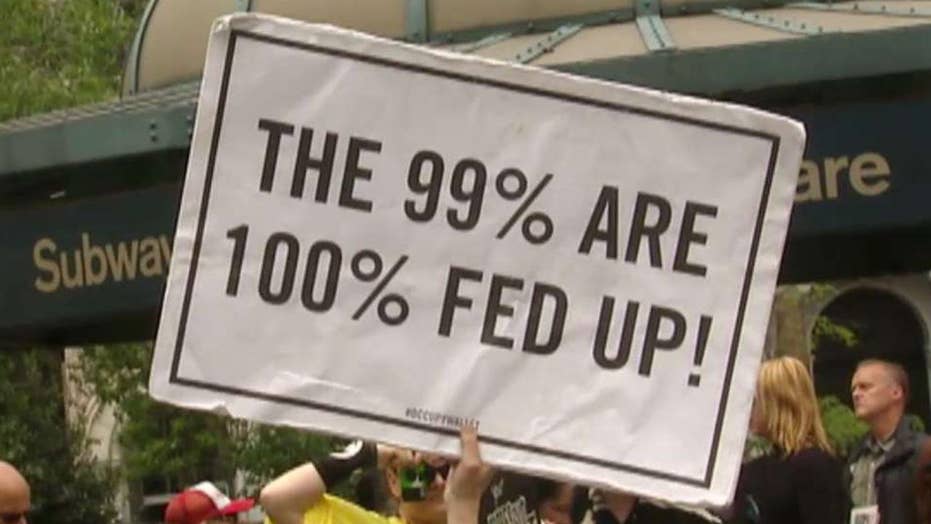 Republicans talk danger of socialism ahead of midterms

Correspondent Doug McKelway looks at what socialism is and how perception of it is evolving.

"The future of the Democratic Party is the working class," proclaimed Alexandria Ocasio-Cortez at a recent Los Angeles fundraiser.

Ocasio-Cortez is the new darling of the democratic socialist movement, which is seeing a resurgence. She stunned the Democratic Party establishment with a primary victory over long-time incumbent Joe Crowley in New York's 14th Congressional District last summer. But there are other candidates making strong showings against mainstream competitors.

The Democratic Socialists of America reports at least 46 other democratic socialist candidates have won primaries this year, and that the organization has grown from 7,000 members to 50,000 since President Trump was elected.

"If you look at Bernie's plan, it's government-run. The government can't run anything, they've proven that," Trump told "Fox & Friends" in a telephone call.

So, what explains socialism's resurgence and how is it defined in contemporary American politics?

"Socialism comes in two flavors," said economist Douglas Holtz-Eakin, president of America's Action Forum and former head of the Congressional Budget Office. "One flavor is when all of the means of production, all the companies, the factories, the hospitals, are actually owned by the government and run by the government. And the second flavor – they may be owned by private individuals but they are heavily regulated and essentially managed by the government."

Critics say the passage of ObamaCare marked a watershed moment in socialism's U.S. return. They say its quasi-socialist system of redistributing health services and costs through government regulation opened the door for many younger socialists who came of age during the 2008 recession that preceded ObamaCare. It was a time when families lost jobs, homes and savings, and student loan debt ballooned.

Many blamed capitalism, failing to grasp the history lessons of socialism.

"We know what a capitalist gas station looks like," Holtz-Eakin says. "You can buy your gas and you go into the convenience store where there is a really astonishing array of food and snacks and drinks and lottery tickets and everything under the sun. If the socialist would have such a gas station, there would be one kind of gas, and inside there would be one snack, one kind of food, one drink, and the shelves would by large be empty."

Economists point to present-day Venezuela as an extreme case of socialism's devastating consequences – marked by food shortages, hyperinflation, government corruption, and a ruthless crackdown on the state's political enemies.

Socialism proponents like Ocasio-Cortez speak of the economic philosophy's success in Nordic countries, where a high level of government services is made possible by extremely high personal income taxes.

But Holtz-Eakin said that fails to point out that the socialism of Nordic countries is also made feasible by extremely low corporate taxes. He added the massive wave of immigration there is also helping to spark a nascent rejection of long-practiced socialism.

In the U.S., Ocasio-Cortez is using socialism's resurgence to reach for more.

How to pay for it? Tax the rich, she says.

"The problem with socialism,” Thatcher once said, “is that eventually, you run out of other people's money.”

Free market economists acknowledge that socialism – with its promise of ubiquitous government services and equality of outcome – is a grand theoretical ideal, if only it were an ideal world.

"If you cannot achieve equality of performance among people born to the same parents and raised under the same roof,” economist Thomas Sowell recently tweeted, “how can you achieve it across broader and deeper social divisions?"