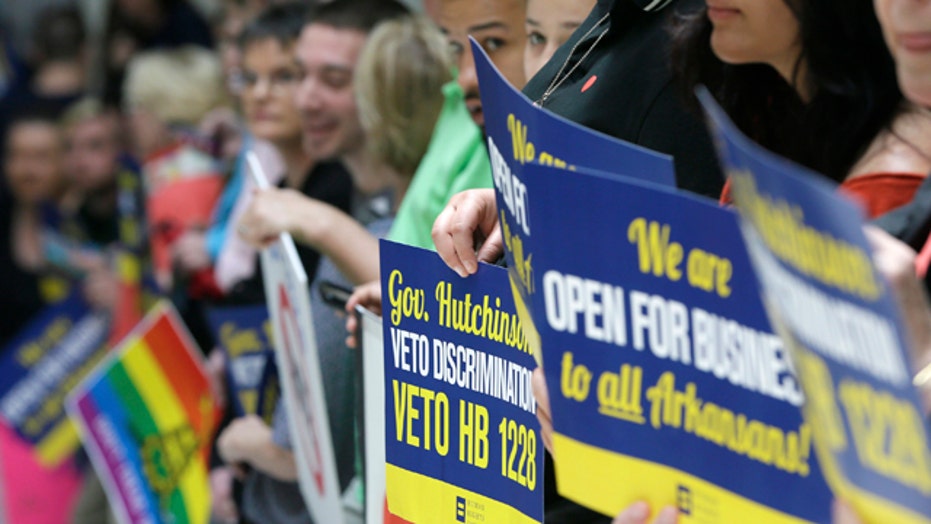 Arkansas lawmakers on Tuesday approved a religious-freedom bill similar to the one recently passed in Indiana that critics say creates the potential for businesses and others to legally discriminate against people because of their sexual orientation.

The state’s Republican-led House gave final approval to the bill, which prohibits the state and local governments from infringing on a person's religious beliefs without a "compelling" interest.

The measure now goes to Republican Gov. Asa Hutchinson, who has said he will sign it into law.

Doug McMillon, the CEO of Arkansas-based Wal-Mart, issued a statement Tuesday pressing Hutchinson to "veto this legislation," and adding that the law would "undermine the spirit of inclusion" in the state.

"[It] does not reflect the values we proudly uphold," McMillon's statement read.

Indiana GOP Gov. Mike Pence signed a similar bill on Thursday. While 19 other states have comparable measures on the books, Indiana's goes a bit further, and Pence has since vowed to work with lawmakers to clarify the legislation.

Companies and lawmakers across the country denounced the Indiana law as discriminatory against gays, lesbians and others -- a few governors and mayors ordered that official business and travel there either be curtailed or stopped. Pence, however, said many are mischaracterizing the legislation.

Arkansas is now seeing a similar debate. This week, hundreds of protesters filled the Arkansas Capitol urging Hutchinson to veto the bill.

Critics say both bills could allow a person to deny another person a service, based on a religious belief, and use that circumstance as a legal defense.

One frequently used example is a baker refusing a wedding cake order from a gay couple.

Pence and the leaders of the state’s Republican-led legislature have argued their bill does not legalize discrimination and is similar to a 1993 federal law signed by President Clinton and to legislation in 19 other states.

However, the Indiana Republican lawmakers vowed Monday to clarify the law -- just before a front-page Indianapolis Star editorial with the giant headline “Fix This Now.”

Prior to the passage Tuesday of the Arkansas bill, the White House repeated its opposition to the Indiana law.

“This kind of public outcry … is indicative of how this piece of legislation flies in the face of values that people all across America strongly support,” said White House Press Secretary Josh Earnest. “Governor Pence falsely tried to suggest the law is the same as the 1993 law. That is not true.”

Earnest also said the Indiana law was a “significant expansion” of current law.