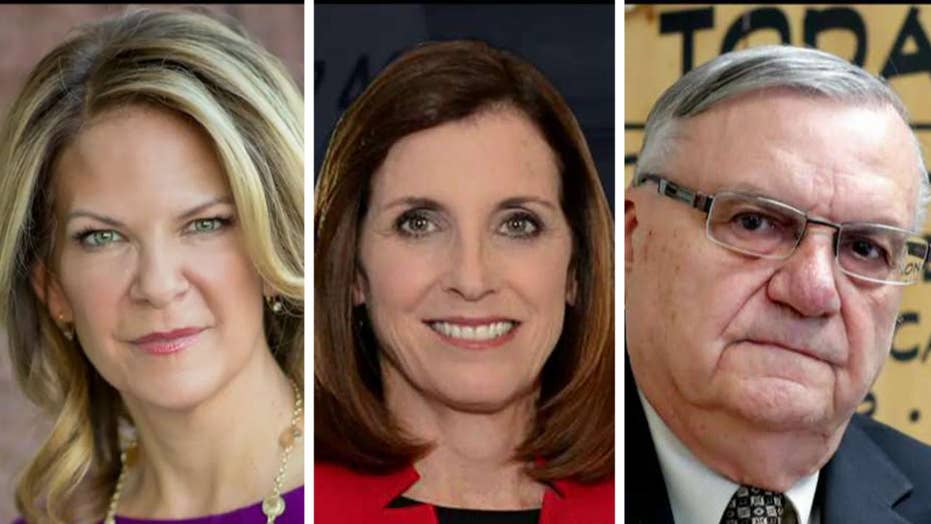 President Trump has not endorsed a candidate in the Arizona Senate primary race; talk radio host Garret Lewis shares his perspective on the race.

Arizona Republicans go to the polls Tuesday to decide who will be the winner of one of the most bruising primaries this election season, as candidates fight to get the party's nod to replace outgoing Sen. Jeff Flake.

In the race, two-term Rep. Martha McSally has emerged as the frontrunner as she fends off challenges from the right in the forms of former state Sen. Kelli Ward and Sheriff Joe Arpaio. But whoever wins the primary will face a tough Democratic challenge as Democrats eye the state as one that can be flipped in November.

While McSally is the establishment favorite, she has also taken a tough stance on immigration, backing Trump’s border wall and focusing much of her campaign on border issues. Despite Flake’s outspoken opposition to the president, none of his challengers has followed his example, and all three have expressed support for Trump.

“I’ve got the strongest voting record with President Trump long before I was running in the Senate,” McSally told Fox News this month, although she had criticized Trump during the 2016 election.

Ward has long been a populist voice in the state, where she had launched a 2016 challenge against Sen. John McCain, R-Ariz. But Ward’s campaign has been damaged by the candidacy of Arpaio, whose entry into the race meant Ward had to cover her own right flank rather than focus on McSally.

Arpaio served six terms as sheriff of Maricopa County and became a national figure due to his stance on immigration and crime. He lost his 2016 re-election bid after being convicted of contempt of court for continuing racial profiling in his department’s hunt for illegal immigrants.

He was pardoned last year by Trump, who repeatedly praised Arpaio during his presidential campaign.

McSally has also been helped by Trump, who has not yet got involved in the race by backing one of her more right-wing opponents. A number of polls show McSally with a significant lead over her two opponents.

For this reason Fox News Power Rankings released this week found that McSally’s more open path to the nomination strengthens her and weakens her likely opponent, Rep. Krysten Sinema, for the general election. As a result, the race rating has been changed from “Lean Democrat” to “Toss Up.”

The primary race has been noted for its tendency to turn nasty.

McSally and Ward traded jabs during a July debate at The Arizona Republic, hitting each other over credentials and who has more solid policy positions. The attacks also got personal at one point.

“And you know, I’m not a trained killer,” Ward said in a reference to McSally’s military service. “I am a trained problem-solver. I’m a trained healer. And I think that’s what we need in Washington.”

Ward’s husband has also said that Arpaio, 86, is unlikely to live long enough to serve out a full-term.

“They’re bringing that out. How much lower can you get?” Arpaio said.

McSally, ahead in the polls, has already started to turn her attention to Sinema, and released an ad this week hitting Sinema for protesting in a pink outfit while McSally served in the military after 9/11.

“While we were in harm’s way in uniform, Kyrsten Sinema was protesting us in a pink tutu and denigrating our service,” McSally says.

Sinema, meanwhile, said that the ad was a sign McSally was struggling in the primary.

"If Congresswoman McSally is struggling this much to win what should have been an easy primary, it's hard to imagine what level she'll stoop to next," James Owens, Sinema's spokesman, said in a statement to The Arizona Republic.