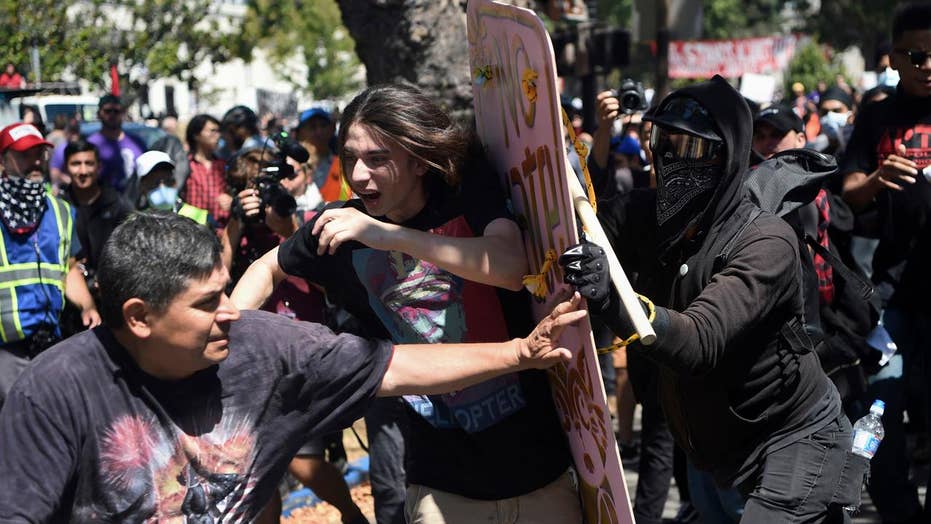 Fox News contributor Kevin Jackson sounds off about the controversy

The same Democrats who criticized President Trump for his response to the Charlottesville violence and warned for days of potential chaos at a right-wing rally planned for last weekend have been virtually silent on the attacks committed Sunday by apparent Antifa members in Berkeley, Calif.

Thirteen people were arrested, and five were injured after more than 100 black-clad, hooded protesters with masks and weapons attacked conservative demonstrators in Berkeley. They allegedly were associated with the far-left Antifa.

“They came with black masks, they carried weapons, they were pounding people down with their fists and feet,” Berkeley College Republican Ashton Whitty told Fox News' “The Story with Martha MacCallum” on Monday night. “I knew I had to get out of there.”

Whitty added: “Everything was great until Antifa showed up.”

But in the wake of the violence, many Democrats including House Minority Leader Nancy Pelosi have yet to condemn Antifa by name.

“Leader Pelosi has always emphasized the importance of ‘peaceful’ in the right to peaceful protest,” a spokesperson for Pelosi, D-Calif., told Fox News when asked Tuesday about the Antifa violence.

Pelosi was not so reserved when she was warning about the potential for chaos in the run-up to a planned Patriot Prayer rally on Saturday. She had repeatedly slammed the National Park Service as “misguided” for allowing the rally, saying she had “grave concerns” about the “public safety hazard” NPS would create by “permitting a white supremacist rally” in the middle of Crissy Field in San Francisco.

The group effectively called off the event over security concerns.

Patriot Prayer leader Joey Gibson, who denies allegations his group represents white supremacist views, blamed Pelosi and the left over what he called a "huge setup."

“The rhetoric from Nancy Pelosi, Mayor Lee, the media, all these people are saying that we’re white supremacists and it’s bringing in tons of extremists,” Gibson said last Friday.

In an interview on "Tucker Carlson Tonight," Gibson questioned how much longer the "moderate left" will "stay silent on Antifa."

“How long are you going to stay silent on Antifa? Because in their silence, it’s almost like they’re using Antifa to their benefit—to attack free speech,” he said, calling out Pelosi and Sen. Dianne Feinstein, D-Calif.

Other Democrats also had warned about the potential for chaos at the Patriot Prayer event. On Friday, state Sen. Scott Wiener accused the group of fueling a "volatile, chaotic, violent tinderbox."

But come Sunday, that kind of violence played out in Berkeley, as so-called anti-fascist protesters showed up at a demonstration and beat Trump supporters.

Democratic officials, though, remain reluctant to specifically speak out against Antifa.

Trump faced similar allegations after the violence in Charlottesville, Va., where a counter-protester at a white supremacist rally was killed in a car attack. Trump was hammered by members of both parties for initially blaming "many sides," and not specifically calling out white supremacists.

“We ALL must be united & condemn all that hate stands for. There is no place for this kind of violence in America. Lets come together as one!” Trump tweeted in the midst of the Charlottesville protests.

Faced with a backlash, Trump then condemned neo-Nazis and white supremacists -- only to invite more criticism the following day by again blaming "both sides" and claiming some "fine people" attended that Virginia rally.

Amid the furor over his response, the president stressed that the "alt-left" was stoking violence as well.

“As I’ve said after Charlottesville, anyone who came to our state, anyone who committed violence, on any side, will be arrested,” McAuliffe told the Independent Journal Review on Monday, when asked about Berkeley.

Asked for comment, a Democratic National Committee spokesman said the party has "been clear in its condemnation of violence, bigotry, and hate," before turning the focus back to Republicans who don't condemn Trump's response to Charlottesville and accusing them of being "complicit."

The official said: "Democrats will continue to rise up and organize in a peaceful manner against the hate promoted by the Trump administration."

The only major Democrat to publicly come out against Antifa was Berkeley’s Mayor Jesse Arreguin, who said he thought they should “classify” Antifa “as a gang.”

“They come dressed in uniforms,” Arreguin said. “They have weapons, almost like a militia and I think we need to think about that in terms of our law enforcement approach.”