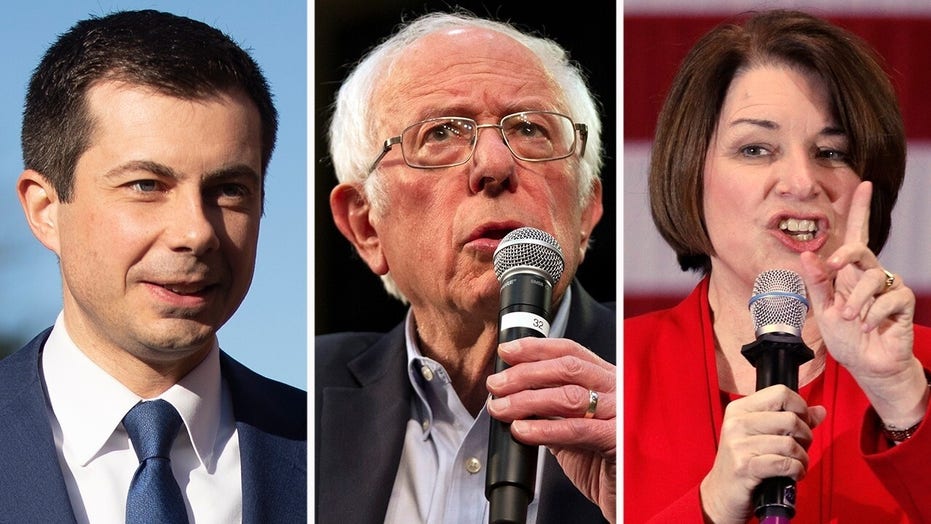 Have Buttigieg, Klobuchar put the brakes on an inevitable Sanders nomination?

Joe Biden is set to pick up the majority of delegates that would have gone to Pete Buttigieg and Sen. Amy Klobuchar; Fox News Decision Desk member Daron Shaw breaks down the Super Tuesday numbers.

Is her "ticket" punched for a ride on the Biden train?

Sen. Amy Klobuchar, D-Minn., sparked vice-presidential speculation Saturday when she said she was joining Joe Biden’s “ticket” -- in an apparent slip of the tongue during a campaign rally for the former vice president in Michigan.

Klobuchar, who has been stumping for Biden across the state ahead of this Tuesday's primary -- since she dropped out of the race and endorsed him last weekend -- told a crowd in Grand Rapids she “couldn’t think of a better way to end my candidacy ... than to join the ticket.”

As the crowd cheered she shook her head at her mistake and laughed, “Kidding …”

BIDEN, SANDERS BATTLE FOR WORKING-CLASS VOTERS AHEAD OF MICHIGAN PRIMARY

“Guys, I was going to say ... ,” she continued through excited chants of “Amy! Amy!,” “than to join the terrific, the terrific, terrific campaign of Joe Biden.”

Biden has not said whom he might pick as a prospective vice president if he were to get the nomination since Super Tuesday returned his formerly struggling campaign to front-runner status, but last fall he mentioned several possibilities, including former Georgia gubernatorial candidate Stacey Abrams and former Deputy Attorney General Sally Yates.

Along with Klobuchar, Biden supporters on social media have also floated -- among others -- Sen. Elizabeth Warren, D-Mass., and Sen. Kamala Harris, D-Calif., both of whom dropped out of the race but have not yet endorsed a candidate. Others have suggested former South Bend, Ind., Mayor Pete Buttigieg, who also dropped out and endorsed Biden last weekend.

Biden won 10 of 14 state contests on Super Tuesday, giving him a mathematical edge on Sen. Bernie Sanders, I-Vt., as they both vie for Michigan next Tuesday, which has the most delegates of any state holding an election this week.

Other states where voters will head to the polls Tuesday are Idaho, Mississippi, Missouri, North Dakota and Washington state.

A win for Sanders in Michigan would be symbolically important as well since he narrowly bested former Secretary of State Hillary Clinton there in a 2016 upset and President Trump also surprised by beating Clinton in the now crucial general election battleground.

As of Saturday, Biden had 664 delegates to Sanders' 573, according to The Associated Press.