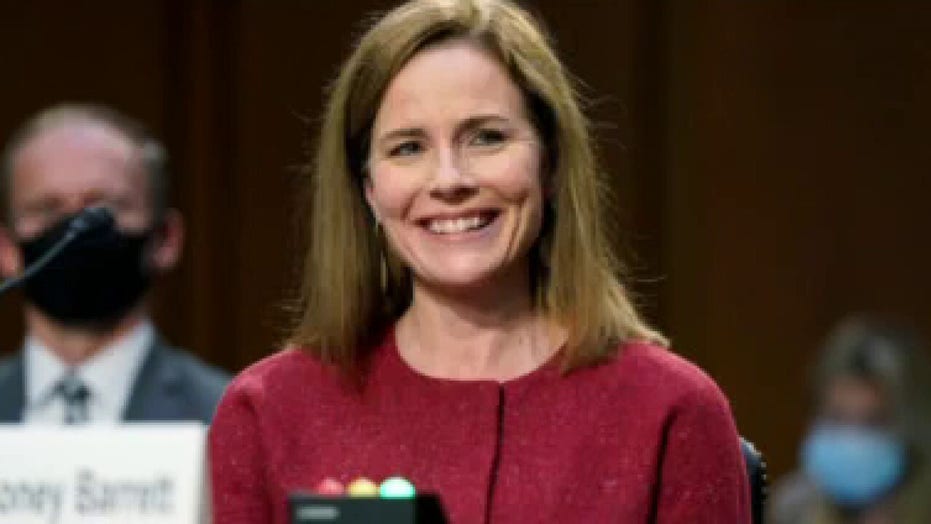 "I'm really impressed, thank you," Senate Judiciary Committee Ranking Member Dianne Feinstein told Supreme Court nominee Amy Coney Barrett on Wednesday as the marathon hearing for the potential future justice continues to focus on how she might rule on an upcoming challenge to the Affordable Care Act (ACA).

Feinstein's comment came after Barrett went into a detailed definition of "severability," which Barrett on Tuesday described as the central issue in California v. Texas, the ACA challenge set to be argued before the court on Nov. 10. Democrats on Tuesday repeatedly asked Barrett to weigh in on that case and whether she was asked by President Trump to rule in a certain way on the case.

Barrett would not answer those questions as the matter is pending before the court, as Democrats further amplified their worries that she would overturn the ACA entirely, as the red states behind the case are asking. But a different angle of questioning by Feinstein, D-Calif., on the subject allowed Barrett to delve deeper on the "severability" issue without weighing in on the specific case. And her answer may indicate that she could be receptive to arguments by blue states that if one part of the ACA is ruled unconstitutional, the rest of it should stand. 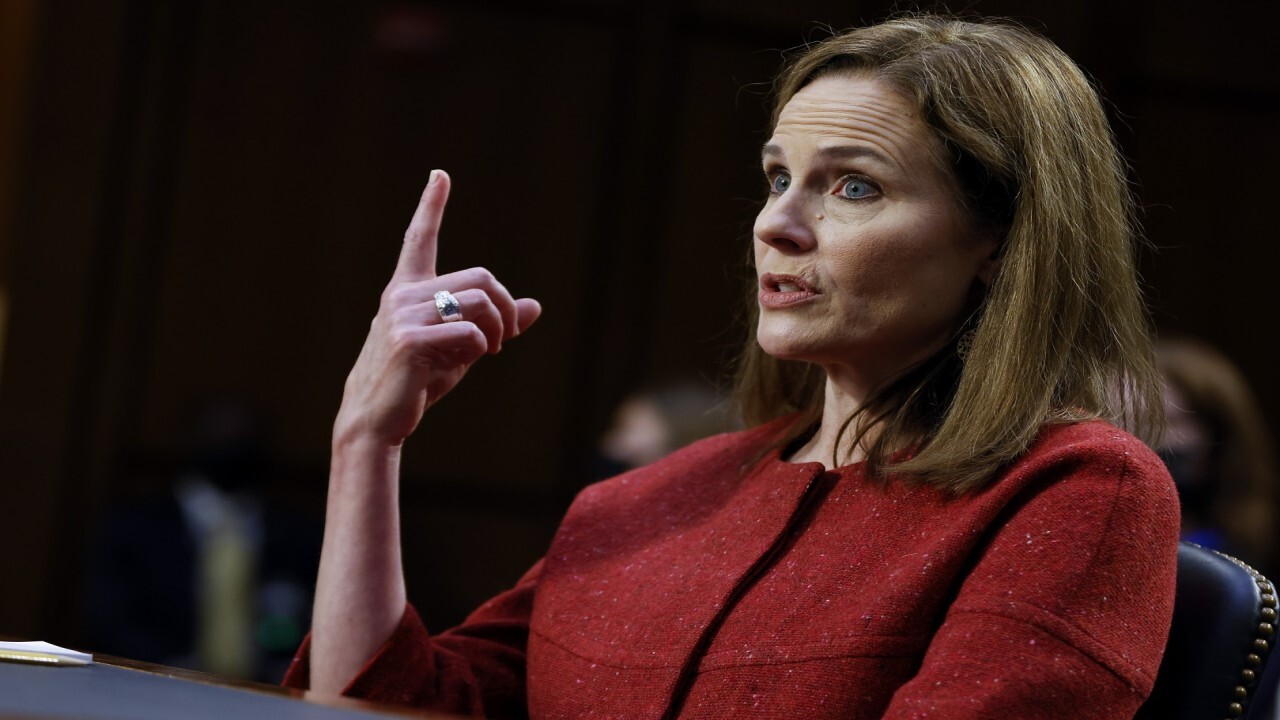 "I think I can say without expressing disagreement or agreement for the reasons I said yesterday not being able to grade precedents ... even by Justice Scalia's view the issue would be different in California v. Texas for two reasons," Barrett said. "One, Justice Scalia thought two provisions of the [law] were unconstitutional. So if you picture severability being like a Jenga game, it's kind of if you pull one out ... will it all stand or if you pull two out will it still stand?"

There is only one potentially unconstitutional provision at issue in California v. Texas.

Barrett added: "I think the doctrine of severability as it's been described by the court serves a valuable function of trying not to undo your work when you wouldn't want a court to undo your work. Severability strives to look at a statute as a whole and say 'would Congress have considered this provision so vital that kind of in the Jenga game, pulling it out, Congress wouldn't want the statute anymore?'"

It's after that answer when Feinstein said she was impressed with Barrett, underscoring the increased civility during the Barrett hearings compared to the 2018 hearings for Justice Brett Kavanaugh.

The Wednesday proceedings, of course, were not entirely different from Tuesday's.

Barrett continued to stonewall Democrats when asked directly to opine on laws and cases that might come before her as a justice, specifically when Feinstein asked Barrett about the Supreme Court case Shelby County v. Holder, which had to do with the Voting Rights Act.

Sen. Patrick Leahy, D-Vt., also asked Barrett whether President Trump would have a right to pardon himself. Barrett responded that "so far as I know that question has never been litigated ... because it would be opining on an open question ... it's not one in which I can offer a view." 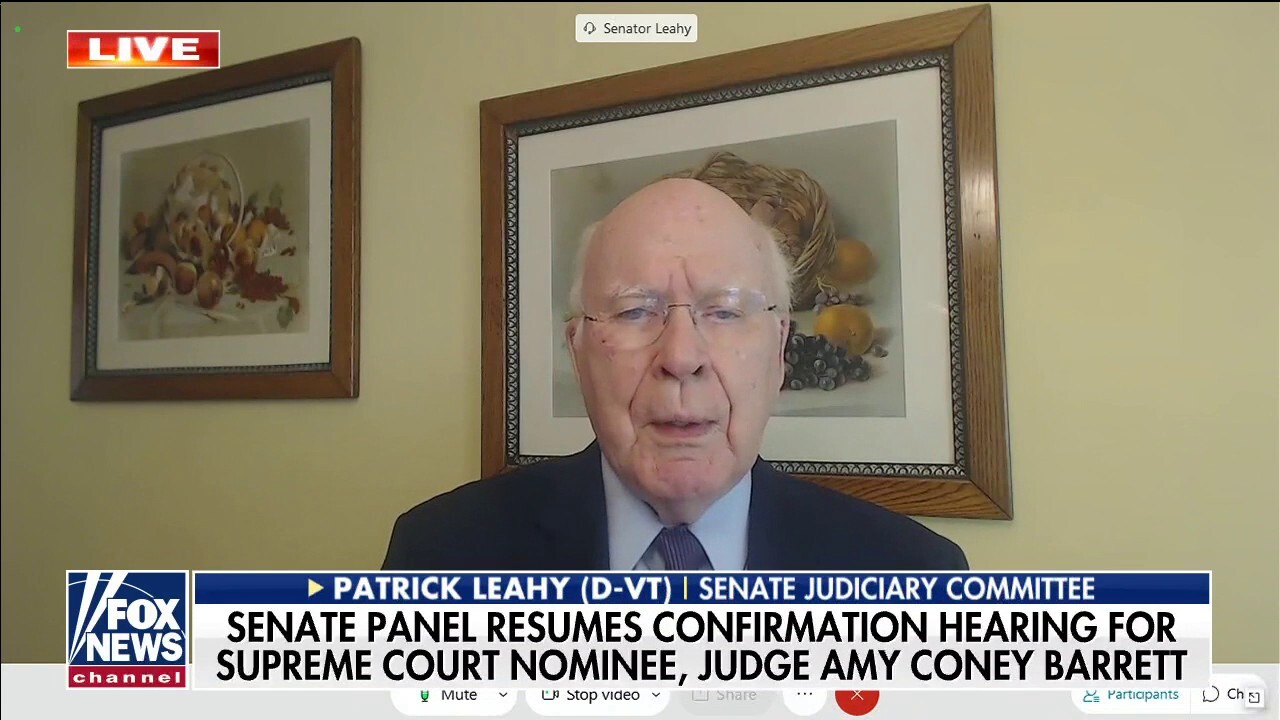 Sen. Dick Durbin, D-Ill., asked Barrett about her non-response to the possibility Trump could claim the right to delay an election.

"I've given that response to every hypothetical I've been asked," Barrett said. "I do that because it would be inappropriate for me to make a comment."

Durbin also slammed Barrett over the fact Trump has said he wants a justice on the Supreme Court to overturn the ACA.

"Why, what's the hurry?" Durbin said of the nature of this week's hearings. "Because there is a political agenda here and whether you are privy to it, party of it notwithstanding, it has to do with the Affordable Care Act." 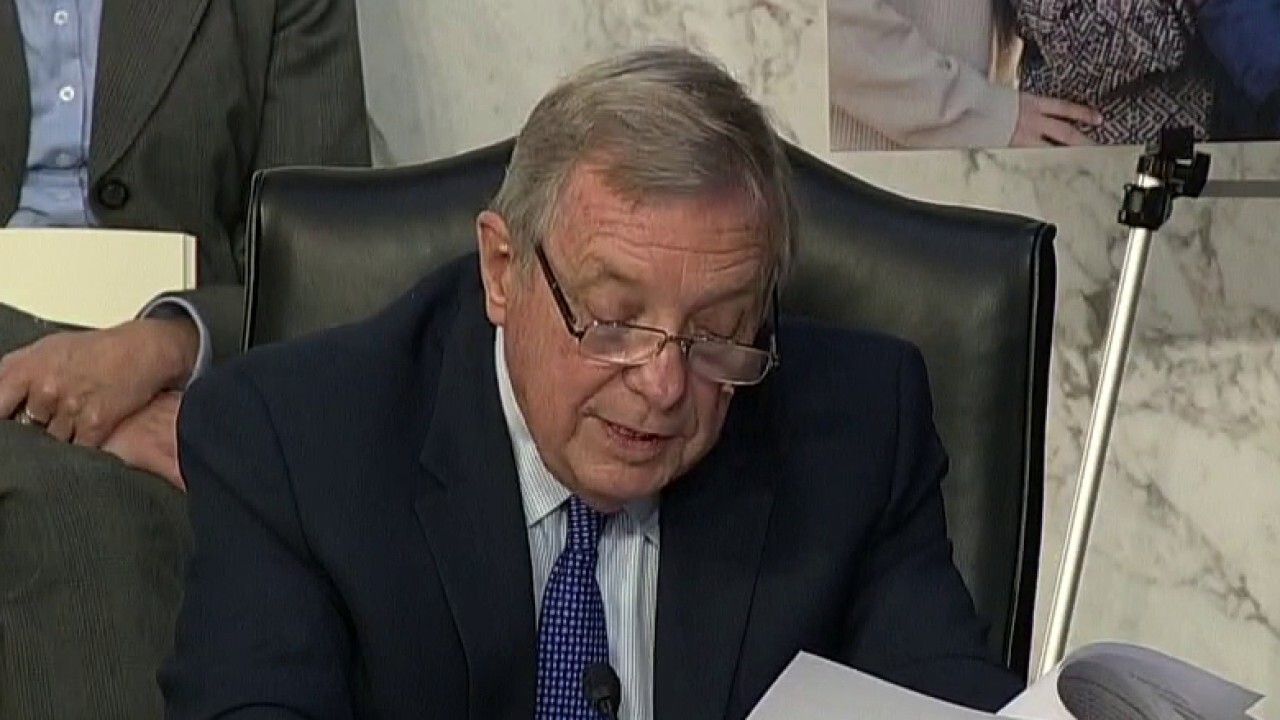 Durbin then turned to Barrett's answers on severability in California v. Texas, accusing her of potentially skipping a step in the case and assuming that the individual mandate, which blue states led by California are still arguing is constitutional. Only if the individual mandate is found unconstitutional by the Supreme Court will severability even be considered. Barrett defended herself on that point.

Durbin then pressed Barrett on her previous writings in which she was critical of the holding in NFIB v. Sebelius, the original Supreme Court ruling that upheld the constitutionality of the ACA by reading the fine for individuals who don't buy health insurance as a tax. Barrett argued that there is a significant difference because Congress has since "zeroed-out" the individual mandate penalty and said she is not hostile to the ACA.

"I think you're suggesting that I have some hostility to the ACA which I assure that I don't," Barrett said. She added that she and Durbin could agree that "judicial activism" is bad and that judges shouldn't overturn duly passed laws simply based on "policy preferences."

Sen. Ted Cruz, R-Texas, slammed Democrats on for their focus on the ACA, saying that "Judge Barrett will not be the decision-maker on what the appropriate approach to health care is as a policy matter." 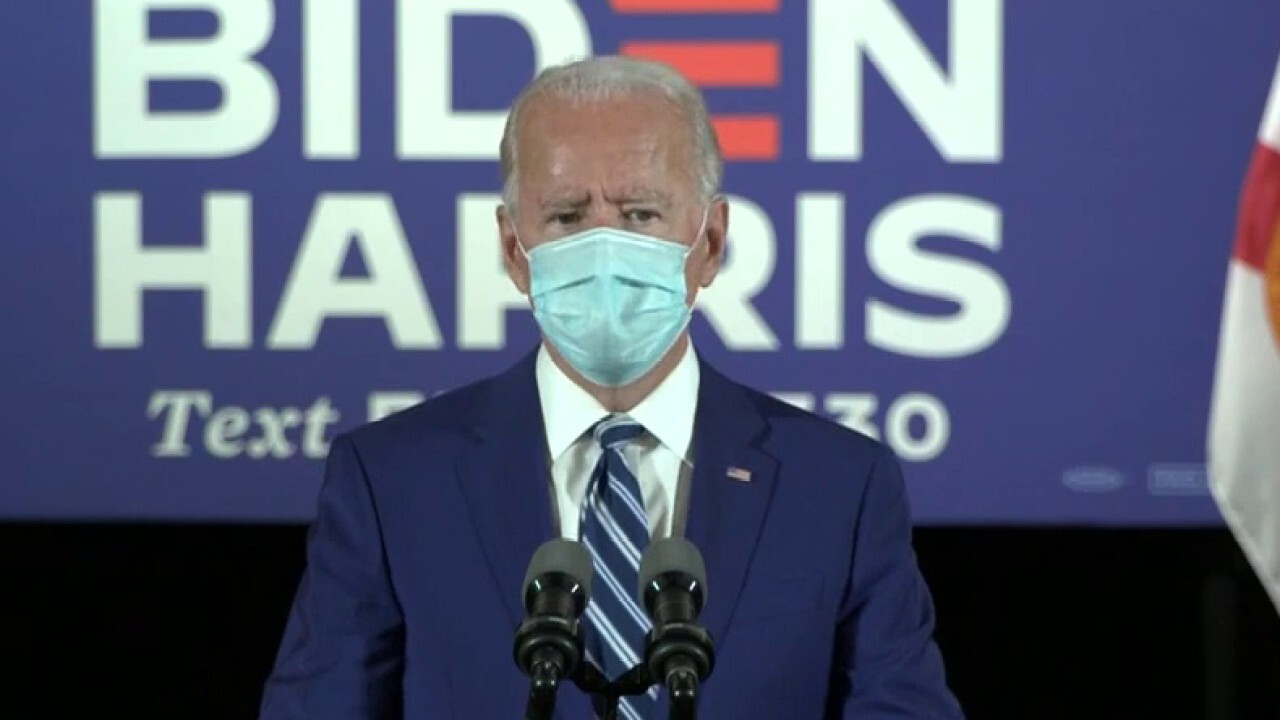 "I thought we were on the Health Committee instead of the Judiciary Committee," Cruz quipped. "I get that's their reelection message. It's not actually connected to reality." Cruz continued that Republicans would like to preserve insurance protections for people with preexisting conditions.

Comments by some Democrats promoting court-packing -- and Joe Biden and vice-presidential nominee Sen. Kamala Harris's refusal to say whether they will support court-packing if elected -- came up again Wednesday while Cruz was speaking. He talked about accusations from Democrats that Republicans have been engaged in a type of court-packing of their own.

"What we've seen this past week is we've seen with a message discipline that is quite remarkable, Democratic senators all making a new argument that what Republicans have done for four years is packing the court," Cruz said. "Filling judicial vacancies is not what that term means. And they are endeavoring to redefine the language to set the framework, to set the predicate, for a partisan assault on the court."

Graham, meanwhile, on Wednesday defended Barrett's non-answers, which are traditional for Supreme Court nominees during their confirmation hearings, quizzing Barrett on a number of issues that Democrats brought up Tuesday, from in vitro fertilization to guns to abortion to gay marriage. Barrett continued not to take stances on the issues. 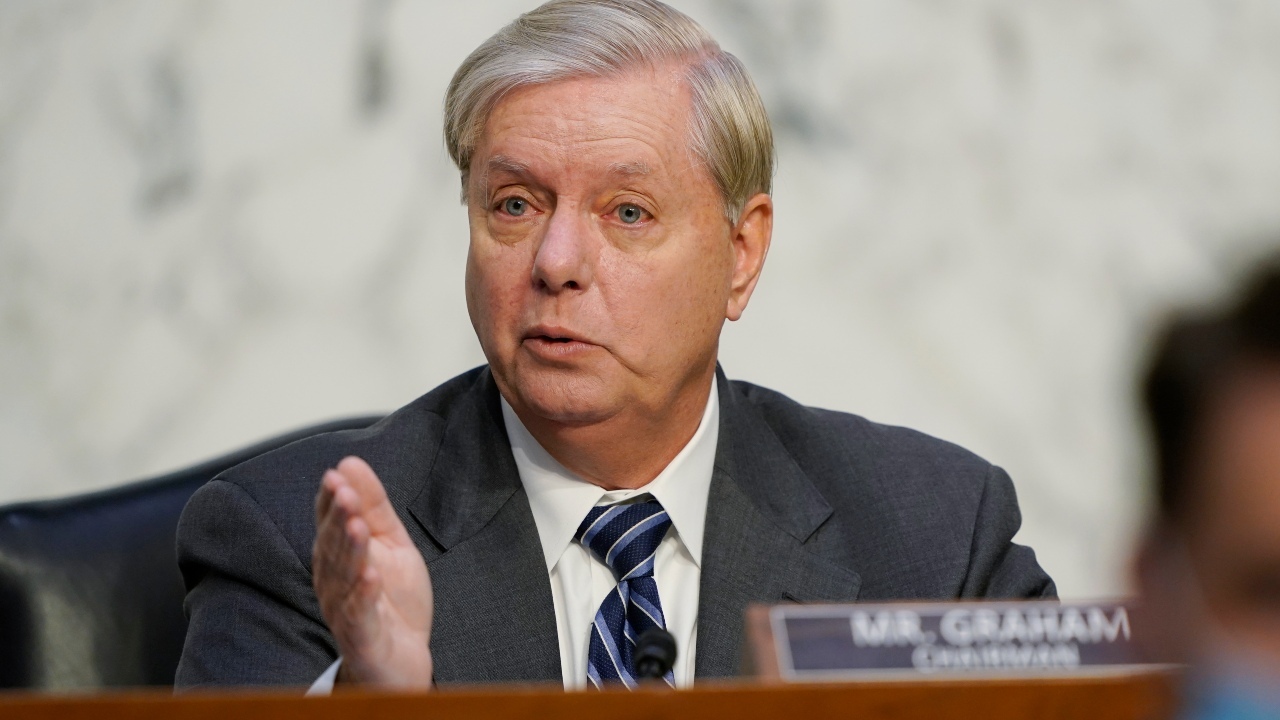 And Republican senators continued to vocally support Barrett's confirmation, with Graham lauding her potential to be a role model for young conservative women.

"It will be a great signal to all young women who share your view of the world that there's a seat at the table for them," Graham said. He later added that Barrett is in the same league as Justices Sonia Sotomayor, Elena Kagan, Neil Gorsuch and Brett Kavanaugh and "in my view, this is exactly where you should be going, to the Supreme Court."

The second day of hearings went more than 11 hours and the third day on Wednesday is expected to last quite long as well, with all 22 senators on the committee getting 20 minutes to question Barrett, with potential 10-minute rounds of questioning to follow.