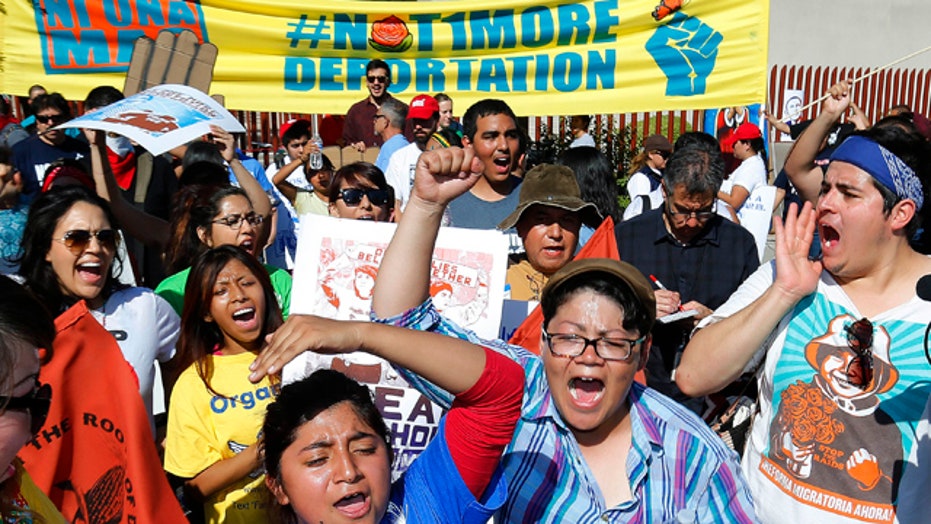 Frustrated by a lack of progress in Congress on immigration legislation, activists are demanding President Obama stop deporting all illegal immigrants -- not just those who arrived here as children.

Only now, they're using new tactics, chaining themselves to buses, jails and federal buildings to persuade lawmakers to let them stay.

In Tucson, Ariz., on Friday, protesters chained themselves to three buses that were deporting illegal immigrants as part of Operation Streamline, a program that prosecutes or deports every illegal immigrant caught at the border. The program is meant to prevent the revolving door that encourages illegal immigrants to re-enter the U.S. hours or days after their initial arrest near the same location.

"No one really sees what happens once people are picked up and how families are separated," said a Phoenix protester. "This is something that happens every day, and it's our mission to keep up the pressure because we're already at too many deportations, and how much longer until the Obama administration does something about this immigration crisis?"

In Phoenix on Monday, 250 protesters also marched to the local Immigration and Customs Enforcement headquarters, though the office was closed due to Columbus Day.

Obama has said he doesn't favor a so-called "blanket amnesty" through executive action, but has instructed immigration control agencies not to break up families. Border Patrol sources tell Fox News it's no surprise, then, they're now seeing entire families -- not just young men -- busting the border in hopes of staying in the U.S.

Opponents say the administration is sending the wrong message.

The Phoenix march was just one incident that underscores the growing frustration of Hispanics and immigration reform advocates over the last few months. Congress appeared ready to pass a bill before the budget and debt-ceiling impasse took hold in Washington. Since then, all other legislation has come to a virtual standstill.

On Monday at the Eloy Detention Center, one of the country's largest immigration jails, protesters chained themselves together in the entryway.

“I’m doing this to show my brother and all the other people inside that we support them and we will do what it takes to get them out," 16-year-old Sandy Estrada of Phoenix told Not One More Deportation.  "I want the president to know that everyone deserves to be with their families and that he can stop our pain.”

Last week, Tucson police pepper-sprayed a crowd that had surrounded a pair of Border Patrol agents who took two illegal immigrants into custody after a traffic stop.

"President Obama is approaching 2 million deportations. That's an all-time record," said Phoenix protestor James Lyall of the ACLU. "So in addition to all the other stuff going on, this is something that affects our communities on a day-to-day basis."

Immigration officials tell Fox News they are prepared to handle the disruptions and will make changes in handling deportations to avoid confrontations.