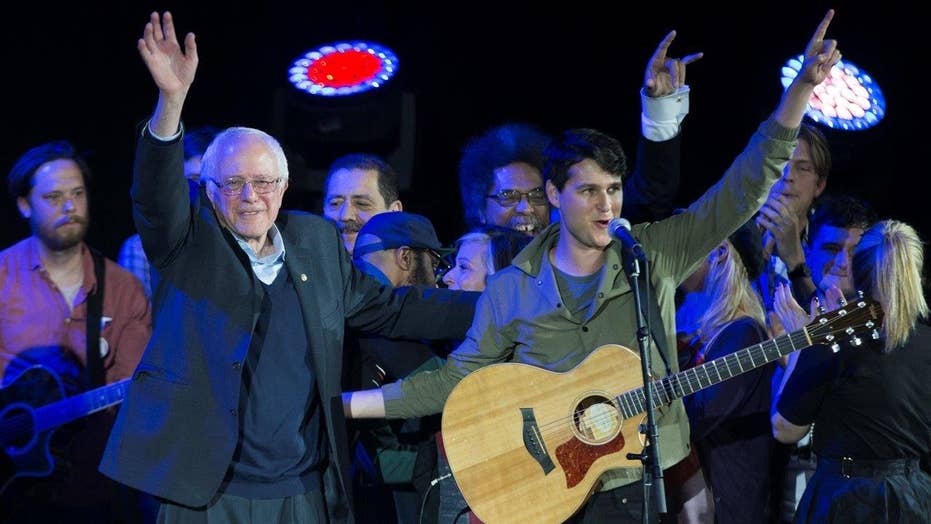 Strategy Room: Basil Smikle Jr. and Cathy Lynn Taylor on the split among stars in 2016 race and whether Hollywoods opinion matters

Hillary Clinton might once have been the toast of Tinseltown, but these days it’s Sen. Bernie Sanders who’s stealing the spotlight.

The Vermont senator, with his unabashedly populist message, has steadily racked up endorsements for months from Hollywood A-listers – and even some famous rockers – in the run-up to the opening primary contests. His impressive cache of celebrity backers now ranges from actors Will Ferrell and Ryan Gosling to the Red Hot Chili Peppers.

As in, the whole band.

“It’s ironic,” Republican strategist Cathy Lynn Taylor told FoxNews.com’s “Strategy Room.” “He couldn’t be further theoretically in what he purports than what Hollywood kind of represents.”

To be sure, the cloud of controversy hanging over Clinton – whether it be her use of a private email server as secretary of state or the response to the 2012 Benghazi attacks – has complicated her bid. But once again, Clinton seems to be contending against a candidate who, like in 2008, has struck a chord with celebrities – and young voters -- with an anti-establishment message.

Sanders doesn’t quite capture the “cool” of Barack Obama circa 2008, but the appeal may be similar.

“Artists tend to be more progressive,” Basil Smikle Jr, executive director of the New York State Democratic Party, told FoxNews.com. “They want to be involved, they want to be engaged and they want to be part of a movement or perhaps start one themselves.”

Smikle said endorsements “generally speaking mean 1 or 2 percentage points, maybe, but for these types of endorsements, it’s really about driving young people to the polls.”

To that end, the Red Hot Chili Peppers are headlining a “Feel the Bern” fundraiser on Feb. 5 in California. Tickets range from $40 to $2,700.

Bassist Flea tweeted his support for Sanders saying he “is the only remotely reasonable candidate for president of the United States.”

Singer-songwriters Jackson Browne and Dave Matthews – and from the land of hard rock, Faith No More bassist Billy Gould -- are also among the eclectic group of musicians who have officially endorsed Sanders’ run for the White House. Vampire Weekend performed at a rally for Sanders Saturday night. The senator, further, picked up endorsements from actor Wil Wheaton and liberal filmmaker Michael Moore.

“Whoever the Democrat is on the ballot come November will win,” Moore wrote Sunday on his blog, dismissing claims that Clinton would be more electable than Sanders in a general election. “Don’t vote by fear. Vote for who u think best represents what u believe in.”

Notably, one-time Clinton supporter Susan Sarandon recently jumped ship and has been stumping for Sanders in Iowa ahead of Monday night’s caucuses.

Sarandon said she’s backing Sanders because of Clinton’s vote to authorize the war in Iraq. “She failed me,” Sarandon told reporters. “That wasn’t just a mistake. It was a disaster.”

Despite the spike in celebrity support for Sanders, Clinton is still pulling in major endorsements.

“Made in the USA” singer Demi Lovato stumped for Clinton at the University of Iowa campus in Iowa City, where she performed three songs for about 2,000 people.

“Girls” creator Lena Dunham posted an Instagram picture of Clinton reading her BlackBerry with a message that read: “This is Hillary reading a text from me that says, ‘With you every step of the way, gurl’ #mypresident.”

“Scandal” star Kerry Washington, who campaigned for President Obama during his 2012 reelection campaign, said she’d “be hitting the stump trail” for Clinton this time around.

While some celebrities have been steadfast in their support of one candidate, others are finding it harder to choose.

Rapper Lil B once said about Clinton, “You gonna win that presidency.” But lately, he’s been singing a different tune.

“Right now it’s all about Bernie,” he tweeted.

Celebrity endorsements aren’t as common on the GOP side, but there have been some notable mentions this election cycle.