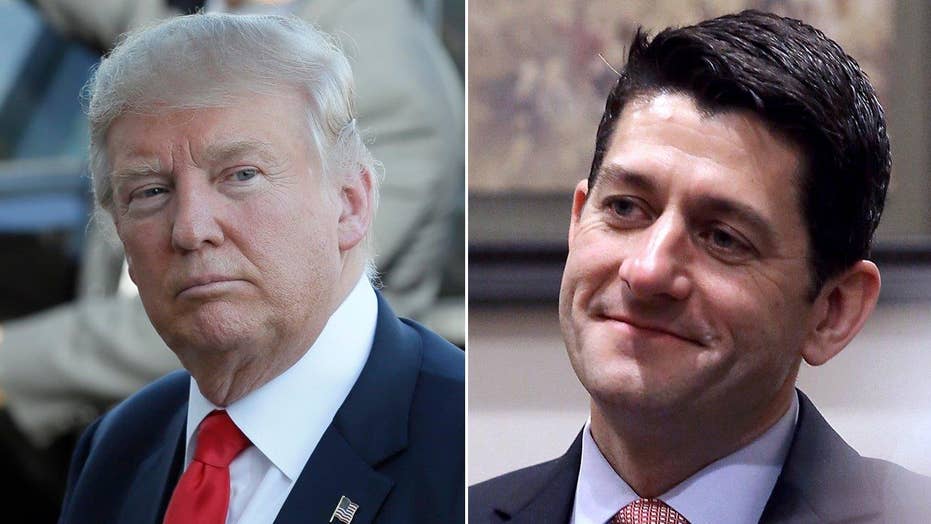 Donald Trump vs. Paul Ryan: Who has the upper hand?

Trump prepares to meet with top Republican leaders on Thursday

Many of America’s leading conservatives are behaving as though someone walked through their front door smelling of manure. They are loftily disapproving of Donald Trump, who does not pass their ideological sniff test and who nonetheless is the presumptive Republican nominee. My advice: get over it. Your guy lost and, as Obama so famously said, elections have consequences.

What is it that so offends GOP grandees? They brand Trump a “populist.” That’s a term often used by the New York Times and other elitist liberal organs to describe somebody low and common, referencing George Wallace or some other discredited figure. However, the dictionary defines the term as a “member or adherent of a political party seeking to represent the interests of ordinary people.” How can that be a bad thing? Some might say that the problem in the U.S. is that both Republicans and Democrats have ignored “ordinary people” for too many years – and those folks are out for revenge.

The push-back to Trump from the conservative wing of the GOP is part ideological, part snobbery and part plain old peeve. The National Review went all out last January, devoting an entire issue to demolishing Trump, and set back the billionaire…not at all. The editors of the journal wrote that Trump is a “philosophically unmoored political opportunist who would trash the broad conservative ideological consensus within the GOP in favor of a free-floating populism with strong-man overtones.”

Here’s the problem: there is no “conservative ideological consensus” within the GOP or anywhere else, for that matter. That’s why Republicans have never nominated a staunch conservative to carry the GOP banner, and never will. Far-right candidates like Rick Santorum or Mike Huckabee always make a solid showing in states like Iowa or South Carolina, but they cannot make it to the finish line. Ted Cruz went farther than most, but only because he became the vehicle by which many hoped to derail the Trump train. On social issues like same-sex marriage and abortion, in particular, Trump is more in sync with American voters than Ted Cruz.

What the editors of National Review failed to understand is that tens of millions of Americans don’t see Trump’s politics as “free-floating” at all. They see him targeting issues that have incensed the nation but received but short shrift from the Obama White House or from the GOP leadership. They actually are offended that our border is wide open, a reality brought home in spades in 2014 when tens of thousands of people from Central America simply walked into the U.S. unimpeded.

People are angry that our leaders have supported trade pacts that have put Americans out of work, a position that Obama has ignored with his endorsement of the TPP.  They think that such deals have benefited corporate interests at the expense of the U.S. A look at Obama’s TPP shows they’re not entirely wrong. The first major study of the TPP, conducted by the World Bank, concluded that Vietnam would be the biggest beneficiary of the agreement, while other nations like Japan and Malaysia would also gain. By comparison, the World Bank, which favors trade, showed that the U.S. might hope to see incremental growth of 0.4% by 2030.  That’s not compelling.

Americans like leaders who make us feel good about our country.

One of the proudest moments in our history was when Ronald Reagan called on Russian leader Mikhail Gorbachev to “Tear down this wall!” It was a moment of confrontation – not involving weapons but rather the authority of economic and military power. It is almost impossible to imagine Obama making such a demand. “North Korea, hand over your nukes!” seems far-fetched.

Obama, like Jimmy Carter, appears embarrassed by American power. He is so committed to reversing what he considers the military excesses of his predecessor that he has embraced self-defeating withdrawals of troops and half-hearted military campaigns which have accomplished little. A doctrine highlighting “strategic patience” has led to North Korea becoming a nuclear power, Russia’s usurpation of Crimea and China’s militarization of the South China Sea.

A number of highly visible Republicans have said they will not support Trump.  One can be sympathetic with Jeb!, who was utterly demolished by Trump early on. But for Paul Ryan, Lindsay Graham and others, voters should make it clear that if they abandon their party, the source of GOP power – the people – will abandon them. They know the alternative is Hillary Clinton, who promises four more years of Obama’s policies. Let us be clear: that is the choice. If conservatives smuggly sit out the race, they will have only themselves to blame for four more years of economic underachievement and suffocating political correctness. And their influence will shrink even further.