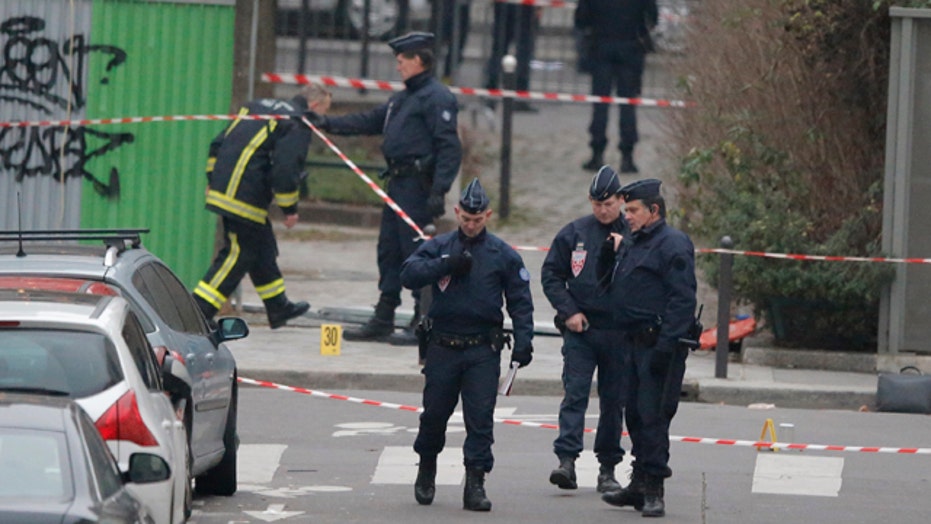 They shouted in Arabic  “Allahu Akbar” (Allah is Greatest) and “We are avenging the Prophet Mohammed” as they sprayed their victims with hundreds of bullets from their semi-automatic weapons.

Their “victims” were the top editorial cartoonists of the satirical Charlie Hebdo magazine, who had dared to practice their right of free speech.  Their offense?  Publishing cartoons deemed “offensive” by Muslim leaders around the world. The perpetrators? Islamic terrorists.

Yet in the immediate hours after the murders in Paris, the response from western leaders was scurrilously predictable in their refusal to describe the attack as an “Islamic terrorist attack.”

Indeed, the responses from our own president, French President Hollande and British Prime Minster David Cameron all spouted the same empty pabulum in asserting that the Paris attack had nothing to do with Islam or any religion for that matter. But the hollow comments coming from our own leaders are steeped in the stench of appeasement and cowardice.

The first comments came from Josh Earnest, the White House spokesman, who refused to even call the massacre an act of terrorism, but made sure to add the now typical non-sequitor  which now routinely follows Islamic terrorist attacks,  that “Islam is a religion of peace” and therefore no should associate with the “extremists” in Paris with Islam.

Then President Obama issued his own statement, but in keeping with his administration’s 6 year old prohibition on using the term “Islamic terrorism,” he simply referred to the attack as “terrorism” -- a vanilla term conspicuously devoid of any descriptive term explaining the motivation behind the attack. Thus, to the proverbial Martian it literally could have been eco-terrorism, white supremacist terrorism, or narco-terrorism.  (But admittedly, calling this an act of “terrorism” was a step up from the classification of Major Nidal Hassan’s similar massacre at Fort Hood as “workplace violence.”)

Then in live comments delivered later, both President Obama and Secretary of State John Kerry gave blustery defenses of the U.S. determination to protect the right of free speech and vowed that neither the French nor anyone in the West would be cowed into silence by terrorism.
Secretary Kerry said as follows:

I hate to disabuse our secretary of state, but indeed  “freedom of expression” has indeed already been killed by acts of Islamic terrorism.

Notwithstanding the secretary’s nice words of bravado today, the views in 2012 of the Obama administration on the very same French magazine were markedly differently “We are aware that a French magazine published cartoons featuring a figure resembling the prophet Muhammad, and obviously we have questions about the judgment of publishing something like this,” said Jay Carney, the White House spokesman. “We know these images will be deeply offensive to many and have the potential to be inflammatory.”

The president himself, before the United Nations, revealed his own appeasement of Islamic terrorists and hoodlums when he declared in September 2012:

“The future must not belong to those who slander the prophet of Islam.”

Where was his moral insistence that we would never give into terrorists who would employ violence to intimidate us in suppressing our right to free speech?

Just imagine if, amidst the recent North Korean campaign to intimidate Sony into not showing its film that offended North Korea, the president had stated, “The future must not belong to those who slander Kim Jong-un.”

The issue we face is not, as Islamist groups falsely claim in the United States -- ironically the very ones invited to the White House, Homeland Security, Department of Justice, and State Department -- that using the term Islamic terrorism connotes a generalization that all Muslims are terrorists any more than using the term “Hispanic drug cartels” means that all Hispanics are druggies or that the term “Italian mafia” means that all Italians are mobsters or that the term “German Nazis” mean that all Germans were Nazis.

The term Islamic terrorism mean just that: terrorist attacks with an Islamic motivation -- whether they attempts to silence critics of Islam, impose Sharia, punish Western “crusaders,” commit genocide of non-Muslims, establish Islamic supremacy (or Caliphate), or destroy any non Muslim peoples (e.g. the Jews and Christians) that are “occupying Muslim lands.”

And so in refusing to use the term Islamic terrorism, the administration and their multiculturalist western leaders go along with the patently false charade that Islamic terrorism simply does not exist.

This has profound national security implications not only for non-Muslims, but for Muslim victims of Islamic terrorism. If you cannot name your enemy, how can you expect to defeat him?

In buying into the notion that uttering the term “radical Islam” is somehow racist, the real scandal here is that our administration and other Western leaders in general are in fact taking a page out of the playbook written by Muslim Brotherhood front groups like the Council on American Islamic Relations (CAIR) and the Muslim Public Affairs Council (MPAC).

Those groups, in turn, are ideological derivatives in the West of the Muslim Brotherhood which itself the parent of all Islamic Sunni terrorist groups—from Al Shabab to ISIS to Al Qaeada to Hamas. And in the West, those Muslim Brotherhood front groups have managed to perpetuate one of the biggest and most dangerous national security frauds of the past 30 years: that use of the term Islamic terrorism is tantamount to a racist generalization that all Muslims are terrorist.  And that any criticism of Islam means you are an Islamophobe.

Four weeks ago, the United Arab Emirates, a distinctly observant Muslim country, had the courage to designate the Muslim Brotherhood and 83 other Islamist groups including CAIR in the U.S. as Islamic terrorist groups.

And our reaction? To our everlasting shame, the Obama administration came to the defense of CAIR, which has been described as a front for Hamas by the FBI and was designated an unindicted co-conspirator in the largest terrorist money laundering trial in U.S. history that resulted in the closure of the Holy Land Foundation and the conviction of its leaders for laundering money to Hamas.

Most recently, in describing ISIS, the Obama administration has categorically defined the group as having “nothing to do with Islam.”

It’s time for our leaders to stop this nonsense.  Islamic terrorism and extremism are brutal realities that have killed tens of thousands of people, mostly Muslims.

Islamic extremism cannot be confined to groups we don’t like. Islamic extremism is now a movement, just like fascism and communism; it spans a spectrum from Hamas to Al Shabab to the Muslim Brotherhood. And to ignore the common denominator in the motivation behind 75% of the world’s annual terrorist attacks carried out by Islamic terrorists is a sure guarantee that Wednesday’s attacks will be repeated over and over again.

Will we ever learn?

Steven Emerson is executive director of the Investigative Project on Terrorism and the executive producer of a new documentary about the Muslim Brotherhood in America "Jihad in America: the Grand Deception."