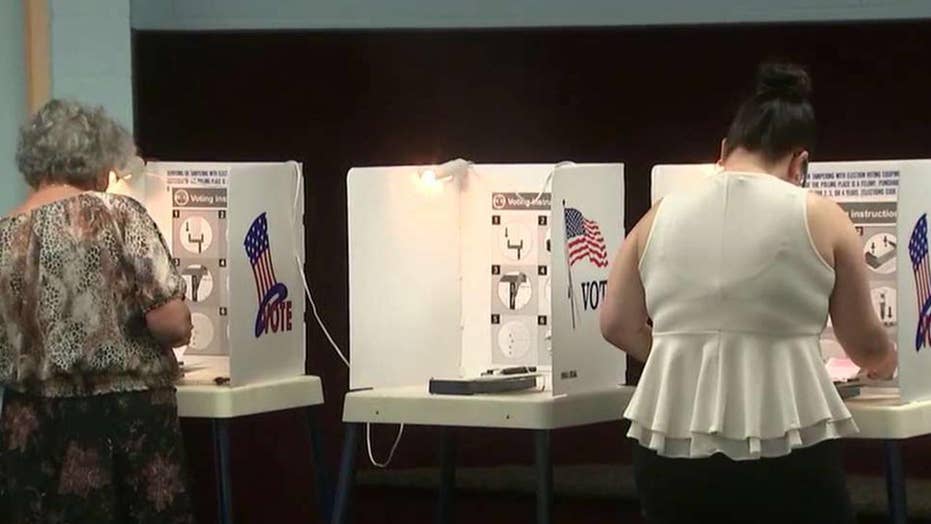 The battle for control of the U.S. House of Representatives began in earnest Tuesday as voters in California – America’s most populous state – joined voters in seven others states to cast ballots in primaries to pick nominees for the Nov. 6 general election.

California currently is represented by 39 Democrats and 14 Republicans in the House, making it the biggest electoral prize in the nation. But races in the other states where primaries were held Tuesday – Alabama, Iowa, Mississippi, Montana, New Jersey, New Mexico and South Dakota – could also help determine whether the House and Senate have Democratic or Republican majorities in 2019. The GOP currently has majorities in both chambers.

If one or both houses of Congress pass from Republican to Democratic control, President Trump would have a much harder time winning approval for his legislative agenda, and could be faced with a threat of impeachment by the House.

California is not just the state with the biggest congressional delegation, but the state with an unusual primary setup, where the top two vote getters in each contest – regardless of party – will face one another in November. That means in some races up and down the ballot voters could have two Democrats or two Republicans on the general election ballot.

If one or both houses of Congress pass from Republican to Democratic control, President Trump would have a much harder time winning approval for his legislative agenda, and could be faced with a threat of impeachment by the House.

The Democrats’ hopes to regain control of the House, which they lost in 2010, rest in no small part on how they do in the nation’s biggest state.

House Minority Leader Nancy Pelosi’s Democratic Party needs to flip a net of at least 24 House seats across the nation to make the California representative speaker of the House once again. Events in her home state are key to what happens in the fall for several reasons.

First, there are seven House seats spread across the state currently represented by Republicans that Hillary Clinton carried in the race for president in 2016. Democrats are eager to capture them in the general election.

If some congressional districts select two Democrats as the top finishers, that will put Democrats closer to their goal of recapturing the House. That’s possible, for example, in the open Anaheim-area 39th District held for many years by retiring Republican Ed Royce.

Equally of interest is how the two slots for California’s November gubernatorial contest will be filled. One will almost certainly go to current Democratic Lt. Gov. Gavin Newsom. The polls suggest the race for the other slot is tight between a Democrat and a Republican.

The Republican who could get on the ballot for governor is businessman John Cox, who had the endorsement of President Trump. The Democrat is former Los Angeles Mayor Antonio Villaraigosa who, late in the primary cycle, began to draw support from a few high-profile Republicans who find him preferable to Newsom – and think Cox can’t beat Newsom.

The possibility of ending up with two Democrats in the California gubernatorial contest does not bode well for the GOP. Most surveys show voters think the vote for governor is the most important ballot they cast after their vote for president. So it will be hard to motivate Republicans to turn out in November when they can’t really make a difference in the state’s most important race.

If Republican voters stay home, they won’t be casting votes the GOP needs to win critical congressional races in the Golden State.

Meanwhile, Democratic Sen. Dianne Feinstein looks to be cruising to a strong first-place finish in the primary to keep her seat against her expected opponent, former State Senate President Kevin de Leon, also a Democrat. De Leon could give Feinstein a tough race in November, coming at her from the Bernie Sanders’ left.

Alabama interim GOP Gov. Kay Ivey – who took office upon the resignation of her Republican predecessor – looked to be headed to an easy win in the race for her party’s nomination. She will go into the general election a heavy favorite against the Democrat picked to run against her.

A closely watched congressional race in Alabama is the Republican primary in the state’s 2nd District, which runs from Dothan and the Gulf Coast up to the suburbs of Montgomery.

Incumbent Martha Roby – who upset some Republican voters after she condemned President Trump for his “Access Hollywood” tape – was fighting to keep her seat in what has turned out to be a strong challenge from the man she beat when first elected, former Democrat turned Republican Bobby Bright.

In Iowa, interim Republican Gov. Kim Reynolds – who replaced Terry Branstad as governor when President Trump appointed Branstad U.S. ambassador to China – ran unopposed for the GOP gubernatorial nomination and is a heavy favorite to win a term on her own.

The Hawkeye State has no U.S. Senate race this year. Only one of the state’s four incumbent House members – Republican Steve King – is considered safe. GOP incumbents David Young in the 3rd District (in the southwestern corner of the state) and Rod Blum (in northeastern Iowa’s 1st District) may have tough contests in the fall, even though both were unopposed in the primary.

In the 2nd district, which is in the southeastern part of the state and includes Iowa City, Democrat Dave Loebsack – who, like his Republican general election challenger Chris Peters ran unopposed it the primary – will have to contest with an electorate that sent him to Washington for sixth time, while Donald Trump carried for the district by just over 4 points.

Mississippi has two U.S. Senate seats to be decided in November, but only the seat held by Republican Roger Wicker was affected by Tuesday’s primary. Early returns indicated Wicker easily prevailed in his primary and enters the race favored to win against whichever Democrat wins the primary. The contest for the seat that came vacant upon the retirement of longtime Republican U.S. Sen. Thad Cochran will be decided at a later date.

In Montana there were four Republicans on the ballot seeking the right to take on two-term incumbent Democrat Jon Tester in the race for U.S. Senate, with state Auditor Matt Rosendale considered by many to be the favorite.

President Trump carried the state in 2016 by more than 200,000 votes and has singled out Tester as someone he’d like to see replaced. But Tester’s numbers are good. Reports Tuesday that absentee balloting and turnout in the primary were both high, meaning voter enthusiasm may be carrying forward from the last election to the next.

Menendez may be tainted by ethics problems that should render him vulnerable, but the state GOP is still in disarray after the drubbing it took in last year’s gubernatorial elections. It also doesn’t help that there are at least 10 seats in the U.S. Senate currently held by Democrats that are just better targets.

The Garden State is also home to a seat which went one way for Congress and the opposite way for president in 2016: the 5th District, in the northern part of the state, went for Trump by 1 point while sending Democrat Josh Gottheimer to Congress.

In the 7th District in 2016, Republican Leonard Lance won his seat on the Pennsylvania side of the state by 11 points as Clinton was carrying it 48.6 to 47.5 percent. How those seats go in November, as well as the outcome in the race in northern New Jersey’s open 11th Congressional District, could depend heavily on the outcome of Tuesday’s primaries.

In New Mexico, Republican U.S. Rep. Steve Pearce from the 2nd Congressional District, which covers the southern half of the state, and Democrat U.S. Rep. Michelle Lujan Grisham from the Albuquerque-centered 1st District will likely face one another in the fall contest to replace term-limited GOP Gov. Susanna Martinez, the nation’s only currently serving Hispanic chief executive.

The seats Lujan Grisham and Pearce are vacating are reliably partisan, so the outcome of the congressional primaries will likely determine who the winner will be in November.

Finally, in South Dakota, voters will be picking a new governor in the fall. On the GOP side the choice is between Kristi Noem, the state’s lone member of the U.S. House of Representatives, and state Attorney General Marty Jackley in a race that started ugly and ended even uglier.

Democrat Billie Sutton ran unopposed for his party’s nomination for governor, as did the party’s congressional candidate, Tim Bjorkman. There are three candidates in the Republican primary to replace Noem in a House seat the GOP is favored to retain, given that Trump carried the state by better than 30 points and 100,000 votes in 2016.