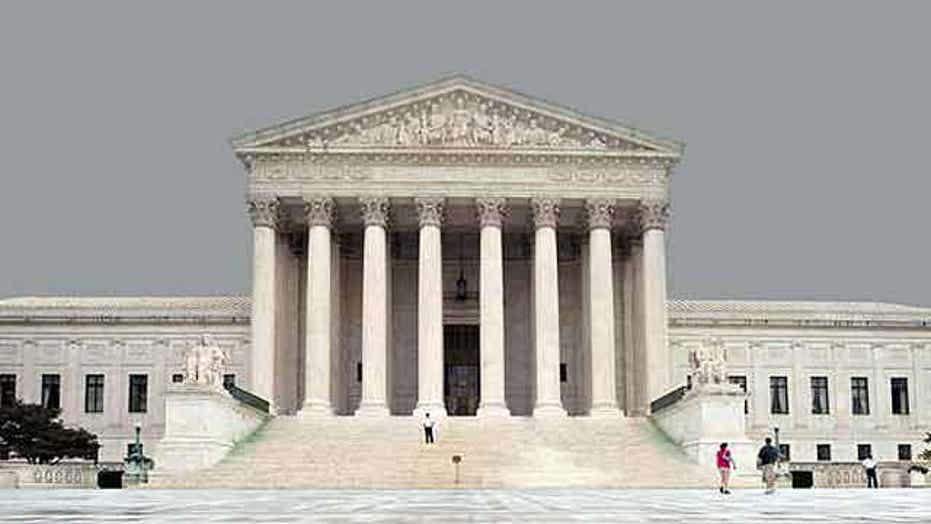 Supreme Court to rule on provision in 1965 Voting Rights Act

Supreme Court Justice Antonin Scalia turned 77 this week. For conservatives, his birthday is an opportunity to celebrate his 27 years on the Court. But it’s also a reminder of the all too likely prospect that President Obama will pick a successor for Scalia or his colleague Anthony Kennedy, who turns 77 in July.

The sudden retirement of Pope Benedict XVI reminds us that when personal decisions or declining health shape history, there is often little or no warning.

Conservatives can hope that Scalia and his four center-right colleagues will all outlast President Obama, but a probabilistic analysis suggests otherwise.

Obama will likely replace at least one of the five, with the resulting liberal majority wrenching the Court to the left on issues ranging from gay marriage and religious liberty to immigration, racial preferences, voter ID laws, and the death penalty.

The Second Amendment right to own firearms would almost certainly be overturned, reducing today’s battle over background checks to mere rearrangement of the Titanic’s deck chairs. Aside from fortune, Senate Republicans are all that stand in the way of this momentous iceberg.

No Democratic president since John Kennedy has failed to fill a Supreme Court vacancy with a reliable liberal. Obama will try to keep that streak going if presented with the retirement or death of one of the five center-right Justices – Scalia, Kennedy, Thomas, Roberts, and Alito.

The new Democratic appointee will, history teaches, vote in virtual lockstep with the Court’s four other liberals on the Second Amendment and other hot-button issues. Together, this liberal majority will enact a progressive agenda, empowered by their belief in a living Constitution.

My informal survey of conservative attorneys and activists finds them surprisingly sanguine in the face of this looming threat, largely because they dismiss or underestimate the chance of at least one center-right Justice leaving the bench during Obama’s second term. They virtually assume that Scalia and Kennedy, the oldest center-right Justices, will be willing and able to work until their death to avoid being replaced by a Democratic president.

In truth, of the 11 Justices who have left the Court since 1980, only Rehnquist died on the bench. Moreover, Scalia has said that he will retire as soon as he loses a step, and it’s unclear whether Kennedy cares which president replaces him.

The average age at which the last 11 Justices have left the Court is 79, suggesting for both Scalia and Kennedy, a roughly even chance of being on the bench at age 80 when Obama leaves office. Even an optimistic analysis, assuming that Scalia and Kennedy each have a 60% chance of outlasting Obama, that Justice Thomas has a 90% chance, and that Justices Roberts and Alito are certain to remain on the Court, yields a bleak result for conservatives – a 68% chance (1- 60% x 60% X 90%) of a center-right vacancy by 2016 – when the probabilities are combined:

Unless Obama can be persuaded to nominate a moderate Justice, what is likely is a Warren Court redux. Named for but outlasting Chief Justice Earl Warren, the Warren Court brought us Roe v. Wade and most of the other judicial excesses decried by conservatives. This time, those decisions will be but a starting point.

The Second Amendment will hang by a thread. In the Court’s most recent Second Amendment case in 2010, each of the progressive Justices still on the bench today – Ginsburg, Breyer and Sotomayor – argued forcefully for overturning precedent to eliminate an individual right to gun ownership. There’s every reason to think Justice Kagan and an Obama-appointed fifth liberal Justice would turn that argument into a majority opinion.

The Warren Court redux is also likely to bring us a constitutional right to both gay marriage and taxpayer-funded abortions, along with an end to the death penalty, voter ID laws, and limits on racial preferences and illegal immigration, to cite just a few examples. All the strides conservatives have made, since the Reagan era, in containing judicial activism would be wiped out.

Short of persuading the center-right Justices to eat healthy, forgo retirement, and pledge to die on the bench, all that stands in the way of this legal Armageddon for conservatives is fortune and the 45 Republicans in the Senate. The goal of conservatives who care about the Court or the issues at stake should be to educate those 45 senators about why it would be a dereliction of duty to treat the next center-right vacancy the same as the Sotomayor and Kagan nominations or the Obama nominee likely to replace Justice Ginsburg.

Instead, conservatives should demand a level of opposition from GOP senators, in the face of a predictably liberal nominee, that is commensurate with the threat of a reborn Warren Court. GOP senators could start by imagining what their Democratic colleagues would do to stop a fifth vote to overturn Roe.

While Republicans can use the prospect of the Warren Court redux to win Senate seats, they certainly can’t count on gaining a majority in 2014. In any case, the next center-right vacancy may not wait until then. Without GOP control of the Senate, a filibuster – or Republican resolve to use one if necessary – may be the only viable way for the party to ensure that a center-right vacancy is filled by a moderate.

Importantly, Democrats’ attempts to water down the filibuster earlier this year left the judicial filibuster unscathed. Subsequently, the failed cloture votes on Chuck Hagel and D.C. Circuit nominee Caitlin Halligan showed that Republicans can unite to oppose a nomination. Filibusters should be used sparingly but it’s hard to imagine a more compelling use for Republicans than preventing a sharp shift to the left on the Court.

Educating and unifying GOP senators around the likely prospect of a new Warren Court is a long-term project. The few days or weeks between a Supreme Court retirement and statements by senators that lock in their position is scarcely enough time to organize a united opposition. Conservatives need to wake up now if the project is to be successful.