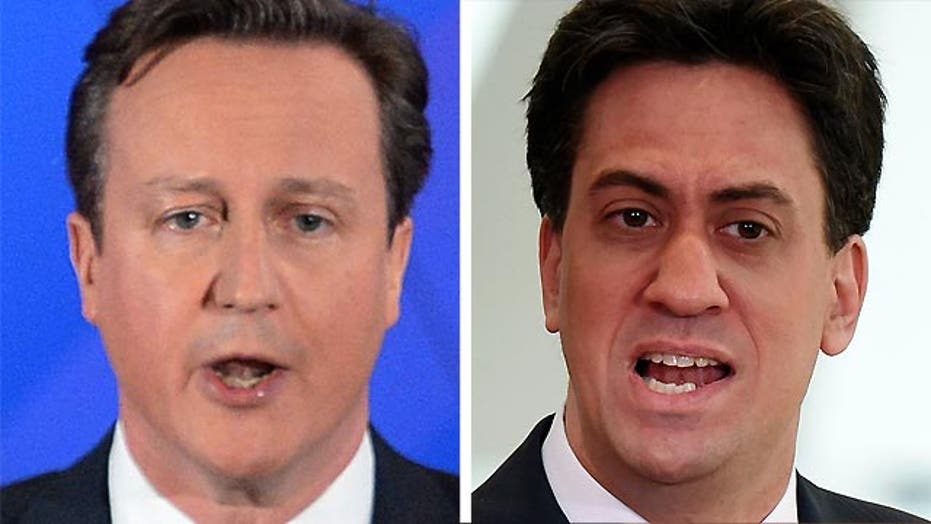 This week’s general election in the United Kingdom offers voters one of the starkest and most important choices in decades. What they choose could have seismic consequences for the international situation and leave America much lonelier on the world stage.

In a world where Russian aggression is surging, where Iran is spiraling out of control and ISIS is rampaging across the Middle East, America needs its allies more than ever – and America has no better ally than Great Britain.

Polls show the election on a knife-edge. On one side is Prime Minister David Cameron’s Conservative Party which, lacking a majority in 2010, made a coalition deal with the left-of-center Liberal Democrats.

In a world where Russian aggression is surging, where Iran is spiraling out of control and ISIS is rampaging across the Middle East, America needs its allies more than ever – and America has no better ally than Great Britain.

While Cameron is a moderate conservative – pro-gay marriage, pro-European Union and committed to environmental issues -- he nonetheless has led a quiet revolution, implementing spending cuts while ushering in moderate tax relief across the board (including an 8 percent cut in corporation tax), and creating a strong economy. The result was what many economists called “a jobs miracle,” hailed as a success story even by the left-leaning International Monetary Fund.

Cameron has worked hard to keep the U.K.-U.S. alliance strong, and the U.K. has backed a great deal of American foreign policy since 2010. Cameron's government joined the U.S. in airstrikes against ISIS, and Cameron pushed for the U.K. to back U.S. action in Syria against Bashar Al-Assad's regime in 2013 — although he was defeated by left wing opponents led by Labour Party leader Ed Miliband, his opponent in this election.

Miliband, the son of Marxist academic Ralph Miliband, is the most left-wing Labour leader in decades. Should his party take power, the electoral math determines that he would do so by forming a coalition with the Scottish National Party, led by the hard-left, anti-nuclear Nicola Sturgeon. With a tax-and-spend engine, it would be the most left-wing government since Labour turned the U.K. into the “sick man of Europe” in the 1970s with its 90 percent tax rates – only to be rescued by Margaret Thatcher’s free-market revolution in the ’80s.

Combining the most left-wing leader in recent Labour history with the Scottish socialism that Sturgeon would bring to the game would make for a toxic mixture, and polls currently suggest this is the most likely outcome of the election.

Yet apart from the poisonous combination of soaring taxes – that include a new “mansion tax” and a 50 percent income tax rate on top earners -- and spending that would undo all the pro-growth work of the previous government, Miliband and Sturgeon’s policies have severe implications for the international situation.

In addition to seeking to break up the U.K. with yet another independence referendum, the Scottish National Party’s key manifesto promise is to abolish Trident, Britain’s nuclear defense system. Nuclear disarmament may sound to American ears like a relic from the ’60s and ’70s, like wage controls and bell-bottoms, but among old-school European leftists, abolishing Britain’s nuclear deterrent despite a rampant Russia and a boisterous Iran is as “forward-thinking” as it gets.

One of the more disappointing aspects of the Cameron government has been its failure to keep defense spending at a decent level, having put it on the table for cuts along with everything else in order to prevent a backlash from the left.

With no nuclear capabilities and a toothless military, it would seem America’s strongest ally couldn’t get much weaker. But with a left-wing government in tow, the typical anti-Americanism of the British left would also be let loose.

The anti-American streak sears through both Sturgeon and Miliband, who was recently offered breathless praise in a New York Times opinion piece by Al Jazeera English presenter Mehdi Hasan, who gushed about how he is “not America’s poodle” and that he “could become the first British prime minister in a generation willing to stand up to the United States and chart a distinctive path.”

Miliband has teased his base with promises to “stand up” to America. Boasting about his opposition to the bombing of Syria in 2013, he bragged, “I think standing up to the leader of the free world shows a certain toughness.”

Miliband’s argument for opposing the Syria strikes – he cited “the lessons of Iraq” – foreshadows how, under Miliband/Sturgeon, every American request for assistance would be met by the “another Iraq” card, which to the left is always an ace.

While Miliband has said he is pro-Israel, going so far as to call himself a “Zionist” before backing down 24 hours later – Miliband eventually opposed Israel’s offensive against Palestine last year, saying that “…as a party we oppose the further escalation of violence we have seen with Israel’s invasion of Gaza.” So in defense of Israel, America would likely stand alone.

Sturgeon, with her hard-left stance on foreign policies, is no better. Even former CNN anchor British journalist Piers Morgan – not known for his right wing credentials – has branded her “the most dangerous wee woman in the world,” arguing “we now face the prospect of having our Government being dictated to by a woman who wants to smash up the U.K., abandon the nuclear deterrent and defiantly cry ‘No chance, laddie’ next time the White House asks for our help.”

In a world where Russian aggression is surging, where Iran is spiraling out of control and ISIS is rampaging across the Middle East, America needs its allies more than ever – and America has no better ally than Great Britain. Britain needs America, too. From World War II to the War on Terror, the world is safer when the Anglosphere is singing from the same hymn sheet.

A Miliband/Sturgeon government would tear the teeth out of Britain’s military, castrate its nuclear defense system and give the finger to the United States in order to appease its anti-American base. It would leave America lonelier on the world stage and add one more voice to the chorus of left-wing opposition in Europe. If the most left-wing prime minister in U.K. history walks through the doors of 10 Downing Street this week, America should be very concerned.

Lee Cohen, a fellow of the U.K.’s Bow Group and the Danube Institute, was adviser on Great Britain to the U.S. House of Representatives Foreign Affairs Committee and founded the Congressional United Kingdom Caucus.