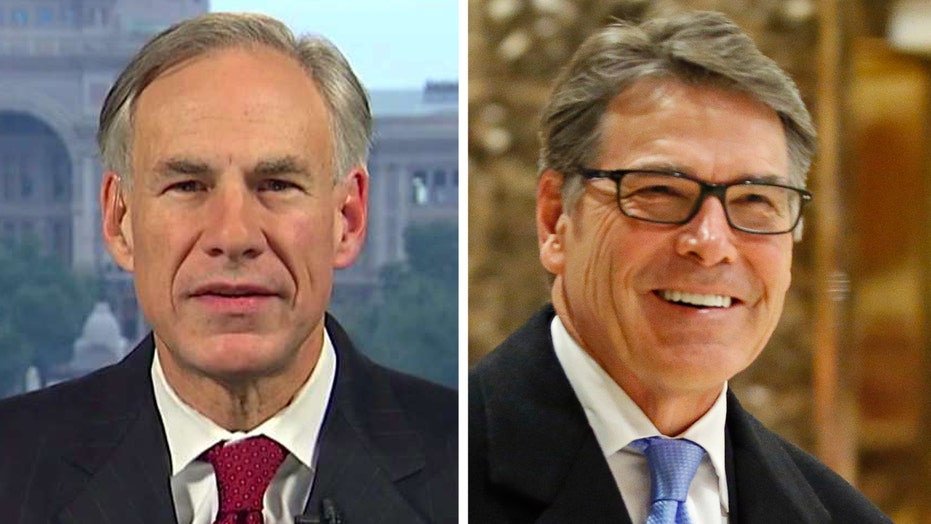 Current governor of Texas weighs in on 'Happening Now'

Over 24 years at Ford Motor Company, Lee Iacocca built a career of renowned success by marketing and selling many of the brands most famous cars – including the Mustang. He then did the unthinkable. Iacocca accepted an offer from Chrysler to be President and CEO. He proceeded to rebuild a company that he had spent years seeking to put out of business. His success is studied and written about to this day.

It’s a pertinent case study for the chattering class in Washington, which is aghast at the prospect of former Texas governor Rick Perry becoming our next Secretary of Energy. It is beyond their comprehension that Governor Perry would be put in charge of a Cabinet level department for which he advocated elimination during his own presidential bid. Perhaps if there were even a modest level of serious analysis, even those predisposed to automatically argue Governor Perry is not suited to lead the Department of Energy (DOE) might reach a different conclusion.

For starters, Governor Perry never indicated that he believed the various important functions housed at DOE should be given short shrift. Instead, he wanted to separate those important functions from the political advocacy activities that occupy too much of the attention of DOE at present.

The Department of Energy did not even exist until 1977 when President Jimmy Carter merged the Nuclear Regulatory Commission (that had previously been the Atomic Energy Commission), the Energy Research and Development Administration (ERDA), the Federal Power Commission, and a multitude of energy centered programs from various departments and agencies.

Instead of streamlining matters concerning energy, far too often, DOE simply was a location to advance a political agenda that emphasized reducing the use of both nuclear energy and fossil fuels while advancing more costly, less efficient sources, largely renewable and solar.  The so-called experts managed to find ways to waste hundreds of millions of dollars to subsidize favorite companies (hello, Solyndra) of President Obama and his donors.

Rick Perry, for more years than any governor in the history of the State of Texas, led a bureaucracy and oversaw a budget larger than that of DOE. It was not as though Texas floundered during his tenure.

Quite the contrary. Texas led the nation in job growth. It also led America in energy development. While states such as California hamper the development of renewable sources, especially wind, with cumbersome regulations, Texas lowered the regulatory burden, reduced taxes and created an economic climate that welcomed investment.  It should be no surprise when the outcome became known as the “wind rush” in the Lone Star State.

Using this same approach, Texas now leads the nation in development of shale resources. This has meant that the same liquid natural gas (LNG) ports built at the time to import foreign gas are now being used to ship gas overseas to our allies and friends.

Determined to formulate policy on the basis of real science, common sense, and an ability to resist tee shirt slogan solutions, the actual carbon footprint was reduced when Perry was governor. While encouraging development, Perry also was one of the first governors to sign a law requiring public disclosure of all liquids pumped into the ground to access shale resources.

Nothing is more important for the Secretary of Energy than to provide the leadership required to assure our nuclear arsenal is managed properly.

Another little recognized role of DOE is to manage our Strategic Petroleum Reserve (SPR). Underground in Louisiana and Texas is enough petroleum to provide about 40 days of total need or 70 days of what we import. Governor Perry has staunchly defended the need for SPR in the face of opposition from those who would substitute political correctness for safety and security for our nation.

On January 20, 2009, the day President Obama was sworn into office, the Democratic-led Senate confirmed 7 of his Cabinet nominees. It’s a precedent and standard that should be extended President-elect Trump.

Further, Governor Perry should be confirmed and put to work that day.

Before we know it, the acclaimed ads by Lee Iacocca touting "the pride is back" may very well apply to the Department of Energy.