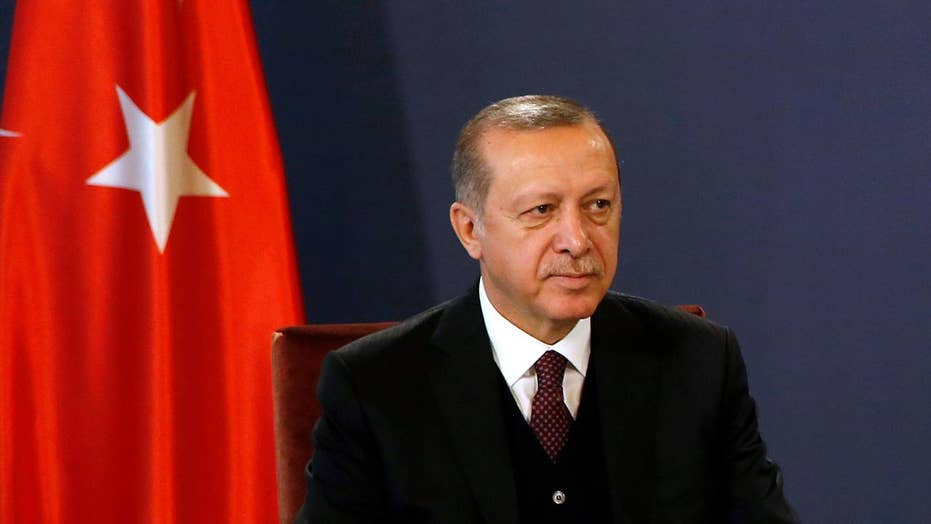 Inside the diplomatic flare up between US, Turkey

To celebrate the 94th anniversary of the founding of Atatürk’s republic, Secretary of State Rex Tillerson issued a statement Sunday praising Erdoğan’s Turkey as a “strategic partner” in “addressing the causes of instability throughout the world” and working to “promote peace and prosperity across the globe.”

The autocrat in Ankara is not only trying to dismantle Atatürk’s secular state, but "strategic partners" of Washington don’t usually sweep up U.S. consulate employees and Americans in a paranoid purge.

Turkish authorities arrested Metin Topuz, a liaison officer at the U.S. consulate in Istanbul who has been employed there since 1994, in early October and accused him of having contacts with plotters of last year’s coup – history’s most bloated conspiracy ever, going by more than 60,000 coup-connection arrests since July 2016 – as well as claiming he was involved with the 2003 Istanbul bombings perpetrated by al Qaeda.

After Topuz’s arrest, the U.S. froze non-immigrant visa services in Turkey, and the Turkish Embassy in D.C. retaliated by suspending visa applications.

Turkish officials then went after consulate employee Mete Cantürk, first taking into custody and interrogating his wife and daughter. Pro-Erdoğan media charged that Cantürk read anti-Erdoğan newspaper Zaman, which was seized and shut by the government last year, and was friends with the editor. In case that charge isn’t silly enough, Cantürk is also accused of listening to radio stations accused of being Gülenist while in his car. Turkish officials have alleged that Cantürk used his consular job to ease access for Turks wanting to visit Erdoğan’s arch-foe, cleric Fethullah Gülen, at his home base in Saylorsburg, Pa.

On Oct. 24, a bipartisan group of senators livid over the arrests of Topuz, Cantürk and another unnamed U.S. consulate employee – just a few cases of Erdoğan’s methodical “erosion of human rights and decline of democratic values” – sent a letter to President Trump noting that Turkey may be a strategic ally in a restive part of the world but Erdoğan has “corroded Turkey’s democracy by mounting an assault on the rule of law, using sweeping state of emergency authorities to stifle fundamental rights including free speech, undermining the independence of the judiciary, and quashing any expressions of opposition.”

The president must send a “clear message” to Erdoğan, the senators wrote, that the U.S. “will not tolerate this type of behavior and that any cooperation must be based on a shared commitment to human rights and rule of law.”

Three days later, at a Washington reception hosted by Turkish Ambassador to the U.S. Serdar Kılıç, Under Secretary of State for Political Affairs Thomas Shannon read a Republic Day congratulatory message from Trump to Erdoğan hailing counterterrorism cooperation between the two and adding music to the regime’s ears: “The U.S. once again underlines its unwavering support to the democratic institutions in Turkey and re-emphasizes that it condemns the July 15, 2016, coup attempt. We appreciate the bravery of committed Turkish citizens to defend their democracy on that tragic day.”

The coup attempt has been nothing more than an everlasting excuse for Erdoğan to purge perceived enemies – Gülenist or not, doesn’t matter to him – and flex his autocratic whims. North Carolina pastor Andrew Brunson was arrested a year ago in the post-coup purge and charged with bogus Gülenist links, espionage and trying to overthrow the republic. Erdoğan recently suggested swapping Brunson for Gülen, showing his obvious hand that the pastor is a pawn in his game, not any more a coup plotter than the tens of thousands of other arrested supposed coup co-conspirators.

While Trump lauds democratic institutions in Turkey, they’re crumbling. While Tillerson praises Turkey as partnering with the United States to fight “violent extremism,” Erdoğan’s regime fosters its own brand of extremism – stomping free speech and the rule of law like no NATO ally, like no professed partner, should ever do.

Bridget Johnson is a senior fellow with the news and public policy group Haym Salomon Center and D.C. bureau chief for PJ Media.