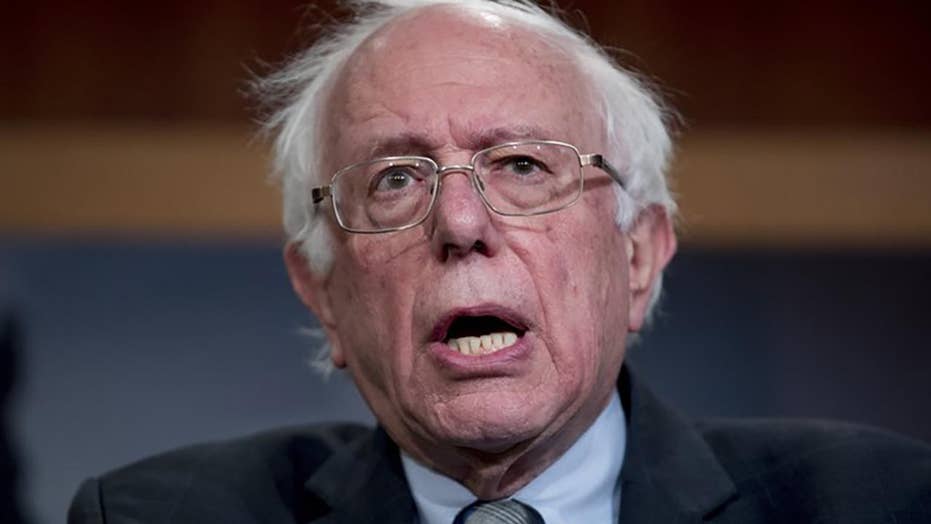 Bernie Sanders is stalling on releasing his tax returns

Is Bernie Sanders hiding something? You have to wonder.

The democratic socialist senator from Vermont, who is seeking the Democratic presidential nomination, claims he is happy to show voters his tax returns … but, pressed on the subject, continues to stall.

Asked in a CNN town hall whether he, like Sen. Elizabeth Warren, D-Mass., would release a decade of his personal finance records, Sanders said he would, “sooner than later,” but assured Wolf Blitzer that his “tax returns will bore you to death, nothing special about them.”

That may be, but his reluctance to open his tax filings to the public, after he and fellow Democrats have sharply criticized President Trump for not releasing his tax records, makes us ponder what Sanders may not want to share.

5 THINGS BERNIE SANDERS DOESN'T WANT YOU TO KNOW ABOUT SOCIALISM

Remember that during the 2016 campaign, Hillary Clinton chided her primary rival for only releasing his returns for 2014, not for the past decade as she had done. He has said since that he would have followed Clinton’s lead if he had become the Democratic presidential candidate. Well, maybe.

At the time, and again recently, Sanders noted that his wife Jane filled out their tax returns. For 2014, that was not an onerous task. The couple reported income of $205,617 and paid taxes amounting to $27,653, for a rate of 13 percent. They deducted state and local taxes, real estate taxes and mortgage interest of $22,946. The senator is correct – pretty dull.

But perhaps the years we haven’t seen are more interesting. When asked why there has been a holdup, Sanders told Blitzer that it was simply a “mechanical issue. ... We don’t have accountants at home."

So maybe the copy machine broke down and no clerks were on hand to fix the smugdy parts?

Sanders added, awkwardly, “We have to do just a few more little things.” Huh?

The problem for Sanders, as for President Trump, is that refusing to bare his financial soul allows for some free range hypothesizing about what in the senator’s past is not ready for prime time.

Did he expense $100 haircuts? Did he and his wife flip houses before the financial crisis? Was either on the payroll of some mysterious client – one of those millionaires and billionaires they so despise?

Probably not – especially, given the photo history, on the haircuts.

But the tax filings could certainly resuscitate interest in Jane Sanders’ financial management of a college she once led, which ultimately inspired an FBI investigation into possible bank fraud.

Between 2004 and 2010 Jane Sanders headed the 200-student liberal arts Burlington College. During her tenure, the college paid $10 million for a 33-acre parcel of land bought from the Catholic Church. To facilitate the purchase, Mrs. Sanders arranged for the college to take out a $6.5 million loan. She convinced bankers that the school would be able to handle the debt thanks to $2.6 million in cash already received from benefactors and commitments of $5 million in future donations.

A local investigative journalism group, VTDigger.org, reported in 2015 that Mrs. Sanders had exaggerated the amount of “pledged gifts” and possibly made other misstatements on the loan application; ultimately the college went under, overwhelmed by Mrs. Sanders’ extravagant expansion plans and, more particularly, the debt load.

Republicans in Vermont requested that the U.S. Attorney’s Office for the District of Vermont open “an investigation into what appears to be federal loan fraud.”

No one has accused Mrs. Sanders of personally benefitting from the 2010 transaction. But people might note that during the years that Burlington College was losing students and struggling financially – a time that Jane Sanders came under fire from faculty and students alike – her salary increased to $150,000 per year.

The tax filings would also presumably include the funds paid out to Mrs. Sanders after the board forced her resignation in 2011. To send her packing, the board approved $200,000 in salary and deferred bonus, as well as retirement payments, to be paid over two years.

None of this is illegal, of course, but it is an embarrassing reminder of a story the Sanders couple wishes would go away. The tale gets a little nastier thanks to a charge from a Republican opponent that Bernie Sanders had used his position to persuade the local bank to issue the Burlington loan  -- a claim that has never been substantiated. The FBI investigation into Mrs. Sanders’ possible misdeeds was dropped last November.

Jane Sanders’ role in killing off Burlington College also raises some skepticism about her latest venture, heading up the Sanders Institute, which opened in 2017. The website claims the mission of the Sanders Institute is to “revitalize democracy” through pursuing “progressive solutions to economic, environmental, racial and social justice issues.”

Let us sincerely hope that Jane Sanders does not revitalize democracy with the thoroughness with which she revitalized Burlington College.

Let us also hope that Bernie Sanders will release his tax returns.