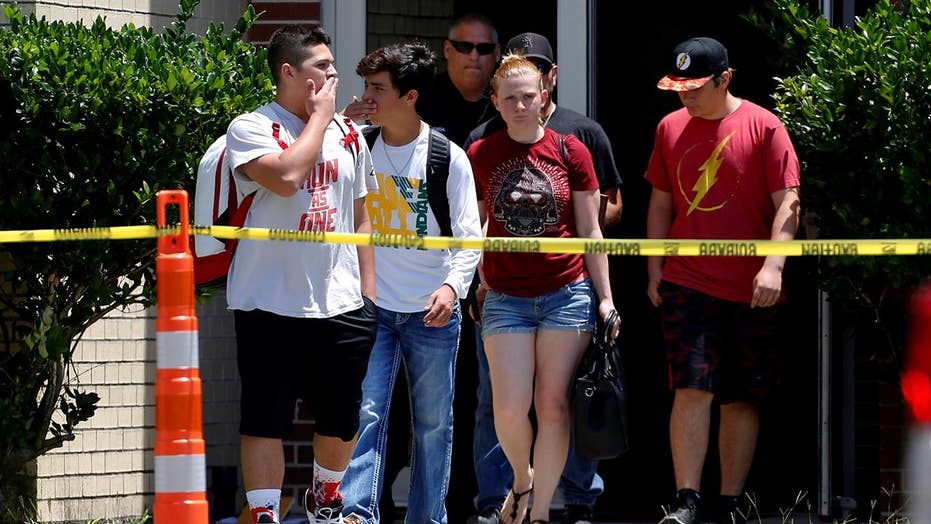 Students are being escorted into the Texas high school by officers to retrieve items lost in the chaos of the tragic school shooting; Casey Stegall reports from Santa Fe.

Following the most recent school mass shooting – this time in Santa Fe, Texas, where 10 students and teachers were killed and 10 were wounded Friday – family members, friends and investigators find themselves searching for illusive answers.

Why did this happen? How do you make sense of such a senseless tragedy?

Texas Gov. Greg Abbott pointed out that unlike other recent mass shootings, “there were not those types of warning signs. The red-flag warnings were either nonexistent or very imperceptible.”

The accused shooter’s parents said the media reports of the shooting seemed “incompatible with the boy (they) love,” and the 17-year-old boy’s best friend said he was “one of the most responsible people I knew. He didn't drink or do drugs, to my knowledge … he was academically proactive, making all A's.”

Given the profile that is emerging, investigators have not yet identified the motive for the shooting.

I, however, know precisely why this latest killer did what he did. And I also know what will motivate the next killer to act in a similar way.

Many years ago, as I began investigating high-profile murders in Los Angeles County, I carefully chronicled the motives for every homicide that occurred in our region. You might think there are a million reasons why someone would commit a murder, but there are only three possibilities.

Human misbehavior is motivated by: financial greed, sexual – or relational – lust, and the pursuit of power.

You might be wondering if there is a fourth category. There isn’t. What about jealousy? What about anger? Ask yourself the question: What is causing the jealousy or anger? There are only three answers to this question, and now you know them.

All murders (kill) are motivated by financial greed (steal), sexual lust (rape) or the pursuit of power (control). Sometimes only one of these motives is the driving force behind a crime. Sometimes two or more are involved.

The latest school shooting is a good example. While there doesn’t appear to be any financial motive, the killer does appear to have been driven by the other two motivations I’ve described:

Sexual Lust – A 16-year-old girl killed in the Santa Fe shooting, Shana Fischer, was apparently pursued by the accused killer in the days and weeks prior to the shooting. Her mother said the accused shooter “kept making advances on her and she repeatedly told him no.” According to Shana’s father, she “told her mother two weeks ago he was going to come and kill her.”

The Pursuit of Power – This form of motivation can be very nuanced and includes one’s sense of respect, authority, embarrassment, prestige or control. For example, as the accused killer became “more aggressive” in his advances toward Shana (approximately one week prior to the shooting), Shana eventually “stood up to him” and “embarrassed him in class.”

In addition, several news organization have reported that the accused shooter was bullied and “mistreated at school.” Episodes of perceived disrespect and embarrassment are often the motive for murder. This would also explain why some of the accused killer’s friends said that he recently “started wearing a trench coat” and telling students he was “buying knives off Amazon.”

The accused shooter incrementally sought the respect (and fear) of others, a classic example of the pursuit of power. During the attack, the killer even selectively spared students he liked “so he could have his story told.” This effort to elevate his fame and prestige after the fact is consistent with the motive I’ve described.

Since only three motives lie behind school shootings like the ones we’ve seen recently, I sadly expect to see more shootings in the future.

Unless we, as a nation, are willing to embrace and promote a worldview that helps us understand the proper role of money and financial stewardship, promotes sexual purity and restraint, and helps us place the needs of others ahead of our own desires, we can expect more of the same.

Those restorative values may sound familiar to you; they used to be part of our collective heritage and our common worldview. They are also our last and greatest hope if we ever expect to minimize and contain the only three reasons anyone commits a crime.