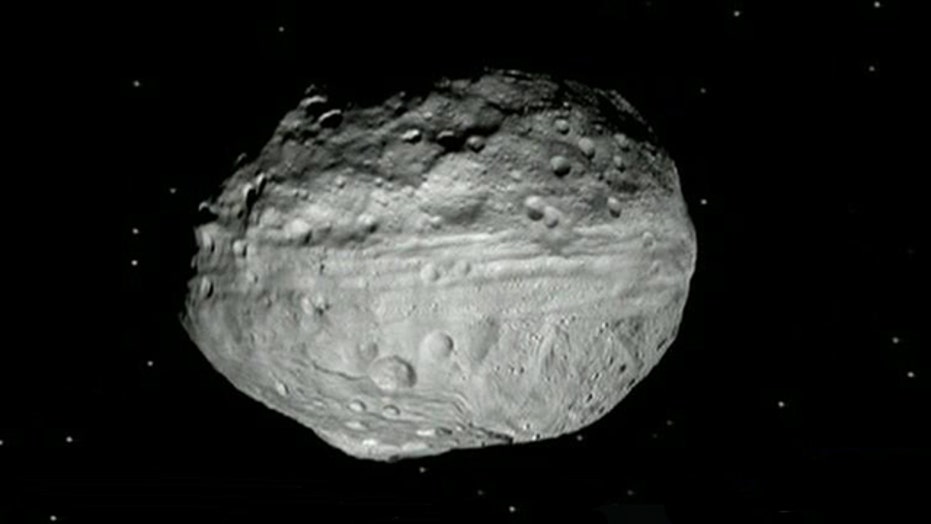 A look at plan to move space rock

Grabbing a small, water-rich asteroid and returning it to a safe orbit around the moon is the new NASA mission concept, announced this week, generating excitement and controversy.

If the space agency wins approval to retrieve the asteroid by the early 2020s, U.S. astronauts will begin to prospect and dissect the object for its scientific and economic treasure. The concept is a bold combination of our robotic and human spaceflight technologies, propelling astronauts beyond-the-moon, and opening a new economic frontier to harness the wealth of natural resources waiting for us in space.

The robotic asteroid retrieval mission will pluck a 23-foot, 500-ton asteroid from its solar orbit and shepherd it by the early 2020s into a parking orbit around the moon.

Astronauts in the new Orion deep space craft will unwrap the “bagged” asteroid, dig deep into its secrets, and return hundreds of pounds of 4.5-billion-year old rock and dust for scientific examination.

Visited repeatedly by international and commercial robot probes, the captured asteroid will serve as a scientific and industrial guinea pig, giving up its scientific mysteries and sparking the birth of a space natural resources industry.

In the ten-year, $2.6-billion venture, private firms will work with NASA to demonstrate how to extract water, construction material, and even strategic metals from the millions of asteroids that lurk near Earth’s orbit. Access to water, rocket fuel, chemicals, and metals from the asteroids and the Moon would lower dramatically the cost of exploring space, and launch profitable ventures from mining to manufacturing.

The first and most versatile product to go after is water --“space gold.” Water from Earth now costs $10,000 a pound to haul to orbit. Why not extract it in space, where we need it?

The water from a single 500-ton asteroid is worth about $1 billion at today’s launch prices. Baked out of surface minerals with concentrated sunshine, robotic miners can split water into the powerful rocket fuels hydrogen and oxygen, highly valuable to NASA and its partner space agencies.

Private space firms like Planetary Resources, Inc. and Deep Space Industries already plan to prospect and extract water from nearby asteroids. Access to a nearby asteroid would bring us closer to the day when industry can save NASA and its partners billions while turning a profit from space-produced materials.

Industry can also team with NASA to learn how to fashion asteroid metals into wire and structural beams, or process their complex organic compounds into industrial catalysts for space-based refineries. Although the first customers will be space agencies looking for affordable rocket fuel and drinking water, satellite operators and space tourism companies will sign on, too.

Asteroid retrieval won’t be easy: most are small, dim, and hard to detect from the ground, and NASA will need sensitive new telescopes to search for asteroid targets with the right orbit and chemical makeup.

Yet asteroids routinely find us, as we saw and heard in February over Chelyabinsk in Russia.

NASA can quickly harness existing or off-the-shelf telescopes to find and track these small asteroids, so far overlooked in our search for larger, more dangerous objects.

Much of the other technology for the retrieval mission is near at hand. NASA plans to demonstrate advanced solar electric propulsion, already tested on the Dawn asteroid mission. The capture mechanism, a tough fabric envelope opened and closed by graphite-composite stiffeners, draws on previous experience with tear-resistant spacesuit materials and lightweight communications antenna ribs. Experience gained on the capture mission will then feed directly into deep space systems needed for future astronaut journeys toward the Moon, asteroids and Mars.

The International Space Station (ISS) is well-positioned to assist in the industrial use of the captured asteroid. NASA and its ISS partners can use its versatile lab space to experiment with extracting water and metals from meteorites (asteroid “free samples”) under low gravity conditions. Industry should propose and help fund these demonstrations.

The ISS partners should also help expand the asteroid search network, and later provide transportation and equipment for initial visits to the captured asteroid. In return, their astronauts can join the U.S. on these deep space asteroid expeditions. The ISS partnership might expand into a public/private consortium to deliver fuels, metals, and chemicals from the moon and asteroids for space use.

One other valuable benefit: the act of capturing and moving a small asteroid is in fact a demonstration of technology that can help us ward off a future rogue asteroid impact. Astronaut examination of the asteroid will also give us valuable civil engineering knowledge that increases the chances we can pull off a deflection mission and prevent a cosmic catastrophe.

To jolt NASA from its doldrums, we must give the agency an exciting, practical focus that accelerates our move into deep space.

Capturing and retrieving an asteroid will energize NASA’s exploration efforts: first, access to nearby raw materials out of the Moon’s gravity well; next, expeditions to extract lunar resources or visit larger, “free range” asteroids; finally, using space resources to lower the cost and risk of Mars expeditions.

Along the way, we’ll create an industry that can free Earth from its finite resource limitations, paying for our space exploration efforts many times over.

Here is a space future both the White House and Congress can support. By “mining the sky” – for profit—we can enrich our society with new wealth and technological innovation.

This new mission will put Americans to work far beyond the moon, spur discovery and commerce on the newest American frontier, and give us the wealth and experience to begin the human exploration of Mars.

Thomas D. Jones, Ph.D., is a scientist, author, pilot, and veteran NASA astronaut. In more than eleven years with NASA, he flew on four space shuttle missions to Earth orbit. On his last flight, Dr. Jones led three spacewalks to install the centerpiece of the International Space Station, the American Destiny laboratory. He has spent 53 days working and living in space. Tom served on the NASA Advisory Council and the board of the Association of Space Explorers and is a board member for the Astronauts Memorial Foundation. As an IHMC senior research scientist, he focuses on the future direction of human space exploration, uses of asteroid and space resources, and planetary defense. A frequent public speaker, he appears often on TV and radio with expert commentary on science and space flight. He is the author of "Sky Walking: An Astronaut’s Memoir" For more visit: AstronautTomJones.com.