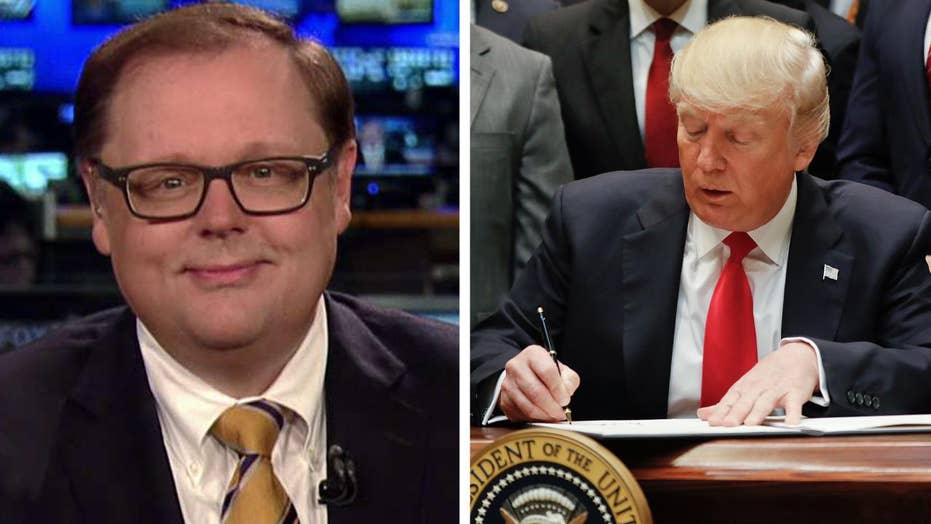 There is a war on religious liberty in America – and this war is targeting people of the Christian faith.

An Army of militant atheists and LGBT activists are hell-bent on eradicating Christianity from the public marketplace and punishing Christians who follow the teachings of Christ.

That’s why President Trump signed an executive order on religious liberty Thursday in the Rose Garden – to protect Americans who have been targeted by a politically correct lynch mob.

The order is for people like Barronelle Stutzman – a grandmother and the owner of a Washington state flower shop. Mrs. Stutzman, a sweet and gentle woman, faces the loss of her business, her home and life savings because she refused to participate in a gay wedding.

It’s for people like the Vander Boon family of Grand Rapids, Michigan – the owners of a meat packing company. USDA inspectors ordered the Vander Boons to remove religious materials from their company’s break room.

Click here for a FREE subscription to Todd’s newsletter: a must-read for Conservatives!

Now, I suspect that some Christians might be puzzled by the president’s executive order – because it does not specifically mention protections for people like the Vander Boons or Mrs. Stutzman.

But fear not, friends.

That’s because President Trump has directed the Department of Justice to come up with guidelines that will protect people of faith and “ensure these religious protections are afforded to all Americans.”

That means Attorney General Jeff Sessions will be writing guidelines for every federal agency to ensure that our rights are protected.

“No American should be forced to choose between the dictates of the federal government and the tenets of their faith,” President Trump said.

“We will not allow people of faith to be targeted, bullied or silenced anymore,” the president said. “We will never ever stand for religious discrimination.”

“The open season on Christians and other people of faith is coming to a close in America and we look forward to assisting the Trump administration in fully restoring America’s First Freedom,” Perkins said.

Perkins said the executive order makes clear “that the administration will pursue policies that protect and vigorously promote religious liberty.”

“This step today starts the process of reversing the devastating trend set by the last administration to punish charities, pastors, family-owned businesses and honest, hard-working people simply for living according to their faith,” Perkins told me.

I know that some of my fellow evangelicals are a bit uneasy because the executive order does not go far enough – but be patient. This is the first of several steps to protect religious liberty.

This president has demonstrated he is a friend to people of faith – and at the end of the day – I have no doubt he will honor his word. Just have faith.