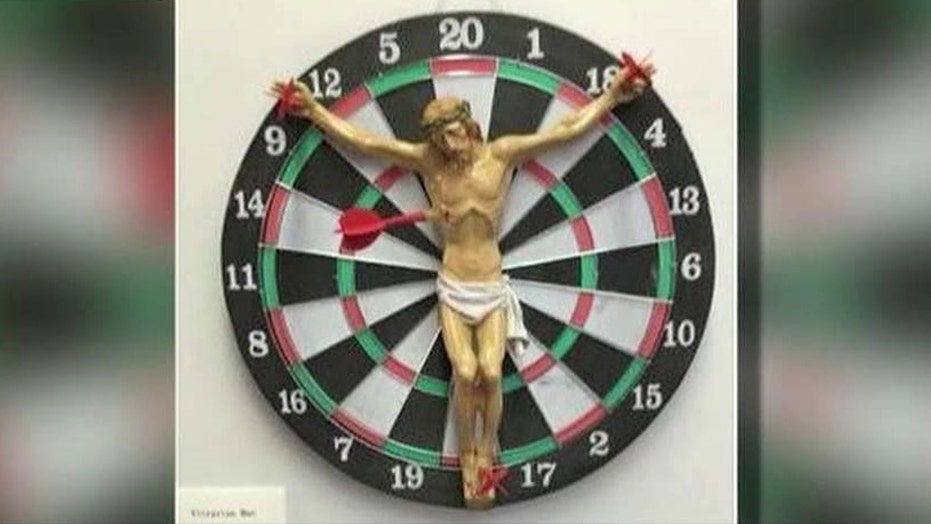 FNC Radio's Todd Starnes on a controversial piece of art at an exhibit at Rutgers University.

The art exhibit inside a campus library at Rutgers University was sickening – Jesus crucified on a dartboard.

“It is surprising that a state university would allow this,” Rutgers alum Natalie Caruso wrote on her Facebook page on April 20. “I asked them to take it down because I found it disrespectful and they refused. How is this acceptable?”

I reckon in this age of political correctness, university are required to provide “safe spaces” for student artists to commit sacrilege.

At Rutgers, that “safe space” just so happened to be inside the Art Library – in a prominent position near the circulation desk, NJ.com reported.

Why, some youngsters even believe that nailing Jesus to a cross with darts – is funny – a Comedy Central chuckle-fest.

“It’s hilarious,” wrote one student on Facebook. “We don’t have to cater to the wills of the Church or any denomination of Christianity or religion.”

However, university officials felt otherwise and two days later they had the exhibit removed – not because it was sacrilegious – but because it violated library policy.

Here’s the statement I received from Rutgers:

“The artwork in question was removed from the exhibit because it did not meet Rutgers University Libraries policy, which requires art exhibitions and their pieces to be based on university events, curricular offerings, and topics of interest to the university community. The process that the Libraries use to determine how artwork is selected for inclusion in an exhibit takes into consideration freedom of expression as well as the criteria listed above. We have concluded that the policy and process the Libraries use to select artwork for exhibitions was not followed.”

I’ve often wondered why the artistic class seems compelled to denigrate and desecrate the Sacred.

Remember the exhibit that featured the Mother Mary smeared in elephant dung? Or what about the crucifix submerged in a bottle of urine?

And yet, the God of the Islamic Radicals is off limits. It’s as if there is some sort of unwritten rule – thou shalt not profane the prophet.

I suspect the fear of a fatwa plays a significant role in their editorial process. And I can understand that.

Nobody wants to be blown to smithereens – event an idealistic, starving artist.

But I have another theory.

Maybe, just maybe American artists give the God of the Islamic Radicals a pass out of mutual respect. The enemy of my enemy…