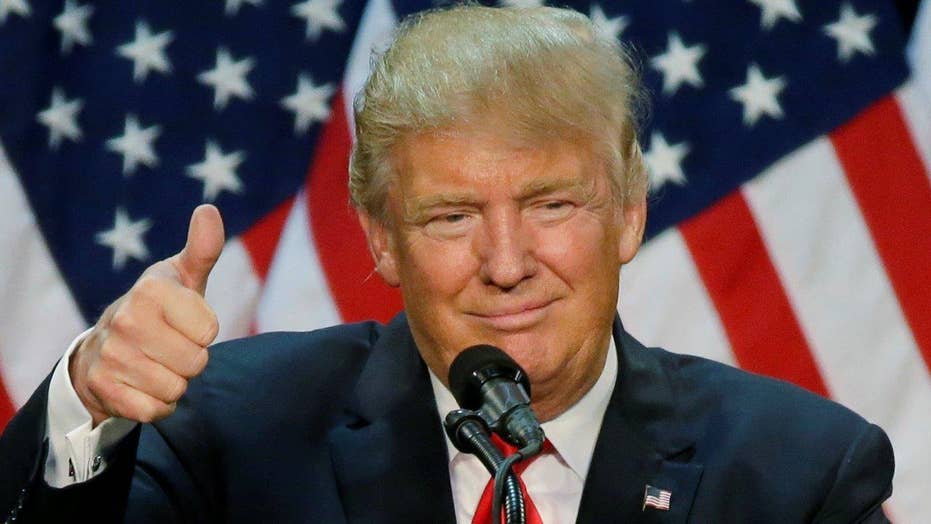 Trump campaign says GOP is coming around after meeting

The pathway for a Republican to the White House is a narrow one.  There is no room for error.  These next few weeks are critical for Donald Trump.  Hillary Clinton must still deal with Bernie Sanders and the prospects of another primary—the FBI Primary.  Trump has a real opportunity to “seize the moment” between now and the convention.  He must make his case that 2016 will be the most important election of our lifetime and that America as we now know it—a nation with a debt of $19 trillion, a military that’s been gutted, that cuts deals with terrorist regimes and lacks a real foreign policy—can’t survive third Obama term.

Recent polls show a tightening Presidential race.  Trump has brought millions of new people into the Republican Party and connected with “forgotten Americans” who believe their government has failed them.  Here’s what Trump must do to further solidify his bond with the “silent majority,” convince Republicans and conservatives who didn’t support him to join him now to prevent an Obama 3rd term, expand the Electoral College map and continue to dominate media coverage.

? Go to the San Diego-Tijuana border and highlight the one part of our border where our government built a secure double-fence as mandated by the Secure Fence Act.  Illegal crossings, drugs, murders and other crimes have been drastically reduced.  He should be joined by U.S. Representative Peter King and former House Armed Services Chairman Duncan Hunter, co-sponsors of the 2006 Secure Fence Act and announce that his wall will be patterned after this legislation that the last two administrations failed to enforce and fund.

? Give a major address on China.  Focus on our massive trade deficit with China, as well as China’s “cyber war” against our national security and economic interests.

? Have a robust “Get Out The Vote” (GOTV) and data analytics technology platform.  Over 90 million eligible voters did not vote in 2012 and this year roughly 40% of Republicans and Democrats say they may look to another candidate or stay home.  Independents will be more important than ever.  The votes are there for Trump to win, but he must have the best technology platform a GOP nominee has ever had to identify his supporters and get them to vote.

? Choreograph the Republican National Convention so that each night highlights a specific issue that connects with voters Trump must turn out.  Have one night focused on the military and veterans.  Another could be focused on securing our borders (highlight how terrorists have used our open border policy, etc.).  Faith and family night could highlight the need to end common core—something Trump connected with evangelicals on early in the campaign.  Jobs and economy night could be on the last night with him accepting the nomination.  An underlying theme could also show a side of Trump that most haven’t seen.  There are stories of his generosity helping people in need.  While it’s not in his character to talk about such things—the American people need to see this side of him.

? Picking the right vice presidential running mate will be crucial.  New Mexico Governor Susana Martinez and Ohio Governor John Kasich would be solid choices and help the ticket big time.  Former House Speaker Newt Gingrich would be the most effective at getting Trump’s agenda enacted and his intellect and vision are sorely needed in a dysfunctional government.

? Identify key presidential appointments, including cabinet positions and a pool of qualified jurists he would pick from for the Supreme Court.  President Reagan said that “Personnel is policy.”  Unfortunately, no President for the last 25 years has been ready with his key appointments when he took office and it routinely takes over 6 months after the Inaugural to get key personnel in place.  By doing this, Trump can say the country is a mess and we need a President who is ready to hit the ground running on Day 1.  His announcement of Governor Chris Christie to head his “transition team” is a good step.

? Enter into a “Contract with America” patterned after what House Republicans did in 1994.  Focus on securing the border, scrapping the Iran deal, protecting the 2nd Amendment, ending common core, rebuilding America’s military and bringing jobs back home.

? Give an address on how he would work with our allies in the Muslim world to defeat radical Islam.  His recent foreign policy speech mentioned this, but you didn’t hear much about it on the evening news.  Make King Abdullah, of Jordan, a central part of his strategy.  Abdullah, a descendant of Mohammad, is pro-West and complained to our Congress last year about our government’s bureaucracy not giving him all he needs to fight radical Islam.

? Focus on the Rust Belt states.  Remind voters this used to be the industrial heartland of America.  Families here, who traditionally vote Democrat, have suffered real economic hardship thanks to NAFTA and outsourcing of American jobs.  The blue-collar billionaire’s message resonates with them.  The Teamsters Union, which backed Ronald Reagan in 1980, is taking a hard look at Trump and many members are already on board.  The 1.3 million Teamsters and their families could play a big role in Trump expanding the GOP Electoral College map.

?  Remind those Republicans who opposed him for the nomination that President Reagan was right when he said, “My eighty-percent friend is not my twenty-percent enemy,” and that the traditional GOP based coupled with the millions of new voters he’s brought into the Republican Party is a winning combination.

Donald Trump has a real chance to win the presidency.  He has connected with working class Americans unlike any Republican presidential candidate since Ronald Reagan. He’s entering the championship rounds now, though, and the establishment and elites will come at him with everything they’ve got.  He must convince the electorate that this is the most important election of our lifetime and the last real chance to keep the America our founding fathers envisioned.