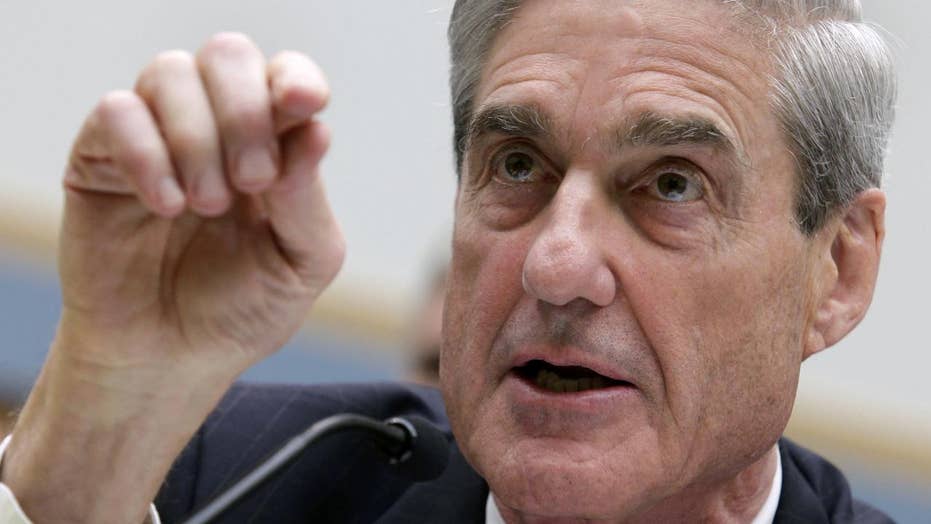 Questioning the credibility of the Mueller investigation

Attorney Allen Orr and Monica Crowley, a senior fellow at the London Center for Policy Research, weigh in on 'The Ingraham Angle.'

Special Counsel Robert Mueller wants to interview President Trump. We know that is true because the areas of inquiry that Mueller is interested in have been leaked. But the questions Mueller is looking at are not about the issue the special counsel was supposed to examine: collusion with Russians to fix the 2016 presidential election.

Rather, the Washington Post reports that Mueller “is seeking to question President Trump in the coming weeks about his decisions to oust national security adviser Michael Flynn and FBI Director James B. Comey, according to two people familiar with his plans.”

The two acts, according to the Post, are related to “efforts by the president or others to hamper the special counsel’s probe.”

How can that be? Flynn had nothing to do with the special counsel’s probe. And firing the head of the FBI does not thwart what all the people under him are doing. So what is the alleged illegality here that could possibly “hamper” or obstruct the investigation?

By agreeing to be interviewed by Mueller, Mr. President, you are agreeing to be questioned about exercising your executive authority in areas having nothing to do with any illegality or even collusion.

Rosenstein’s omission resulted in Paul Manafort, former chairman of the Trump presidential campaign, being indicted for alleged financial crimes occurring years before he worked for Donald Trump. These alleged crimes have nothing to do with Russian collusion.

It is not beside the point that a prosecutor wants to interview the president of the United States about conduct that is not only legal, but actually involves the execution of presidential authority.

But Flynn’s entire conversation was legal, or his statements would have been part of the charges against him. One might ask why the FBI, having the entire transcript of a conversation that contained nothing illegal, even questioned Flynn at all.

This was the legal equivalent of the FBI showing up to ask you what you had for breakfast – there’s nothing illegal about eating breakfast. If you do not want to admit you had a glazed donut and reply “yogurt,” the prosecutor can charge you with making a false statement to the FBI.

George Papadopoulos, an adviser to the Trump presidential campaign, pleaded guilty to providing false statements about the timing of his contacts with certain Russians. But the contacts were legal no matter when they occurred or they, too, would have been part of the charges against him.

The caveat is not limited to a prosecutor’s questioning a person about legal conduct. There is also the danger of two people differing in their statements about an event and the prosecutor – without any other evidence supporting one side or the other – indicting one of them.

Couldn’t happen, you say? But it did. Vice President Dick Cheney’s chief of staff, Scooter Libby (my longtime friend and sometime client), told the FBI he had not told then-New York Times reporter Judith Miller that Valerie Plame was a covert CIA agent – something prohibited under federal law.

Miller remembered it differently when she was interviewed by the FBI and so testified at trial. There was no other evidence to support Miller. Libby was charged and convicted of making a false statement.

Later, Miller read Plame’s autobiography “Fair Game” and realized that she had been misled by Special Counsel Patrick Fitzgerald, a close personal friend of Comey, who had appointed him to the position. As a result, her testimony about Libby “made no sense” she wrote in her book “The Story: A Reporter’s Journey.”

Miller’s recantation was ignored by the media.

Equally appalling and reminiscent of today’s brouhaha over “Russian collusion,” there was no crime involving Libby. Comey knew when he appointed Fitzgerald that Deputy Secretary of State Richard Armitage was the first person to discuss Plame’s CIA relationship when he disclosed it to columnist Robert Novak in 2003. Armitage admitted this in 2006.

If that investigation had been kosher, Armitage would have been indicted. Case over.  Plame worked for the CIA but she was not covert as defined in the law that I personally drafted.

Perhaps the reason for focusing the investigation on Libby and not Armitage was the fact that Fitzgerald repeatedly told Libby’s lawyers that unless Libby “deliver(ed) someone higher up – the vice president” he would be indicted.

Here’s my advice to President Trump:

By agreeing to be interviewed by Mueller, Mr. President, you are agreeing to be questioned about exercising your executive authority in areas having nothing to do with any illegality or even collusion.

In agreeing to this you may recall that an event occurred on Monday and Comey may recall it occurred on Tuesday. A la Papdoupoulos, only the timing is off. Guess which one of you Mueller will indict?