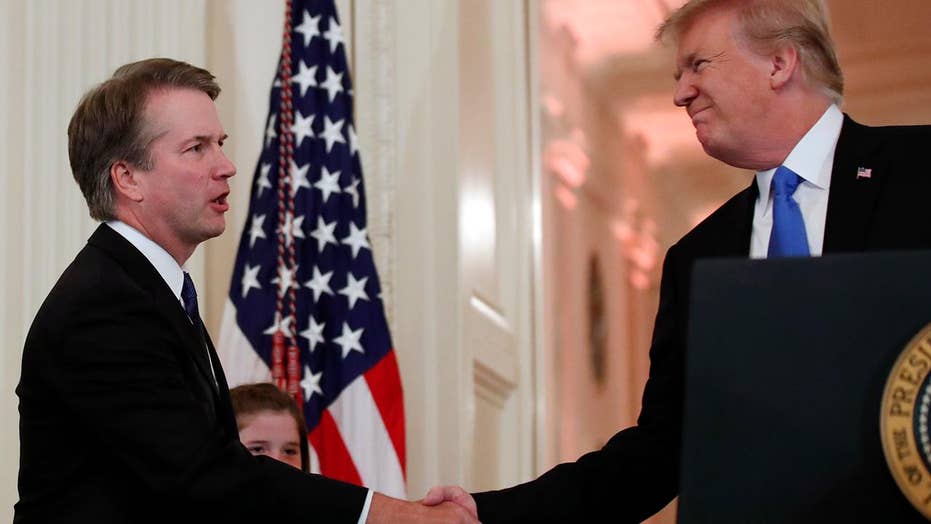 President Trump’s announcement of Brett Kavanaugh as his nominee to replace Justice Anthony Kennedy on the Supreme Court of the United States is directly in line with the president’s record thus far of selecting nominees who have demonstrated strict adherence to the Constitution.

While campaigning for president, Donald Trump promised the American people he would appoint judges who were independent, fair minded, and committed to upholding the Constitution.

Post-election analysis in 2016 revealed that the issue of replacing the late Justice Antonin Scalia was the deciding factor in voting for Trump for millions of Americans.

The nomination and confirmation of Neil Gorsuch to the Supreme Court was the first in a series of judicial appointments by President Trump fulfilling the promise of candidate Trump.

He followed up with subsequent nominations of outstanding jurists to the Circuit Courts of Appeal like Jim Ho, Don Willett, and Amy Barrett.

In his time on the bench, Judge Kavanaugh's opinions have consistently adhered to our founding principles that government exists to protect the God-given rights of the people and that the Constitution exists to prevent government from infringing on the rights it is entrusted to defend.

Even a cursory review of all the names on the president’s list of potential nominees reveals that these men and women represent the best the legal profession has to offer: outstanding education, experience in the position, and well-reasoned decisions that fairly apply the law and the Constitution. Judge Brett Kavanaugh of the U. S. Court of Appeals for the District of Columbia certainly continues the trend.

In his time on the bench at the D.C. Circuit, sometimes referred to as the second highest court in the land, Judge Kavanaugh has written opinions on a wide array of issues. Kavanaugh has many fans because of his excellent judicial approach on Second Amendment cases.

In my role as CEO of First Liberty Institute, the nation’s largest organization exclusively dedicated to religious liberty litigation, I’m particularly focused on his approach to First Amendment cases.

Experience is the best teacher, and my first-hand experience working with Brett Kavanaugh on a religious liberty case at the U.S. Supreme Court has taught me we can trust Judge Kavanaugh with the defense of our first and most sacred right.

He has stood steadfast in many other cases as well. He ruled against attacks on the pledge taken "under God" by our presidents.  In Priests for Life v HHS, a case that raised the question of whether or not the contraception mandate in ObamaCare could be applied to religious organizations, Kavanaugh’s dissented and stood for religious freedom.

As Judge Kavanaugh explained in his dissenting opinion, "Judicially second-guessing the correctness or reasonableness (as opposed to the sincerity) of plaintiffs’ religious beliefs is exactly what the Supreme Court in Hobby Lobby told us not to do."

In short, Kavanaugh has issued decisions protecting religious freedom and free speech, strengthening the Second Amendment, limiting the power of the administrative state on people’s lives, and more. He is an excellent judge—and will make a great Justice of the Supreme Court of the United States—because he is restrained, brilliant, humble, competent and very much committed to the Constitution.

In his time on the bench, Judge Kavanaugh has demonstrated a deep respect for the proper role of the judiciary. His opinions have consistently adhered to our founding principles that government exists to protect the God-given rights of the people and that the Constitution exists to prevent government from infringing on the rights it is entrusted to defend.

Some may criticize him for not going far enough to deliver a preferred political outcome in some cases but results-oriented analysis is anathema to the very judicial philosophy for which Judge Kavanaugh and the rest of President Trump’s nominees have been duly praised.