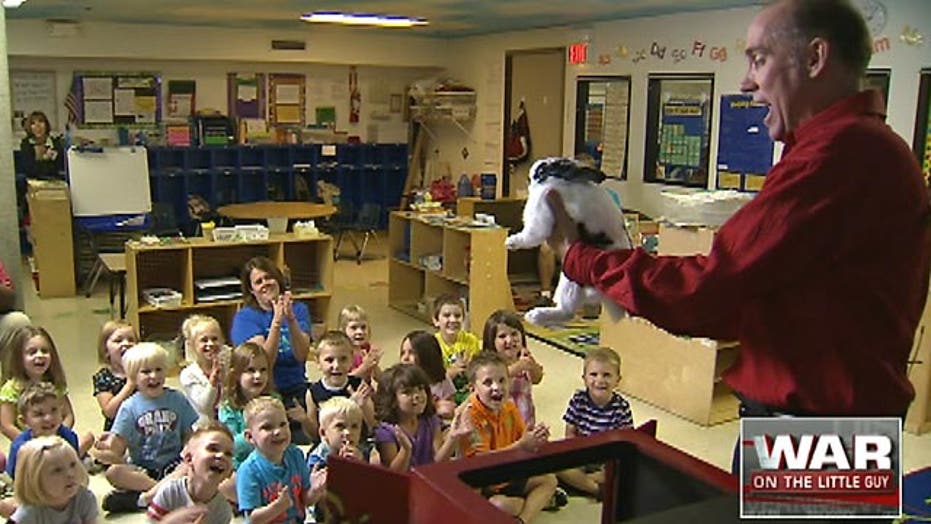 'War on the Little Guy': Marty the Magician

Marty Hahne needs license to use rabbit in his routine

Marty the Magician performed magic tricks for kids in Springfield, Missouri and other states often including the traditional rabbit-out-of-a-hat. Then one day: "I was signing autographs and taking pictures with children and their parents," he told me. "Suddenly, a badge was thrown into the mix, and an inspector said, 'Let me see your license.'"

In the "Harry Potter" books, a creepy Ministry of Magic controls young wizards. Now in the USA, government regulates stage magicians -- one of the countless ways it makes life harder for the little guy.

Marty's torment didn't end with a demand for his license. "She said, from now on, you cannot use your rabbit until you fill out paperwork, pay the $40 license fee. We'll have to inspect your home."

Ten times since, regulators showed up unannounced at Marty's house. At one point, an inspector he hadn't seen before appeared. He hoped things had changed for the better.

"I got a new inspector and I said, oh, did my first one retire? She said, 'No, good news! We've increased our budget and we have more inspectors now. So we'll be able to visit you more often.'"

Here are your tax dollars at work.

The inspectors told Marty that the Animal Welfare Act required him to file paperwork demonstrating that he had "a comprehensive written disaster plan detailing everything I would do with my rabbit in the event of a fire, a flood, a tornado, an ice storm."

Sadly, this Kafkaesque enforcement of petty rules is not a bizarre exception.

Some regulation is useful. But when we passively accept government regulation of everything, thinking we're protecting people from evil corporations run amok, we're really making life harder for ordinary people. Every profession, from cab driving to floral arrangement, is now burdened with complex rules.

You can't even give tours of Washington, D.C., the city that produces most of these insane rules, without getting a special license. Tour guides must pay about $200 for criminal background checks, provide four personal references, show passport photos and pass a written test -- a difficult one.

People who reflexively defend government may feel no pity for businesses that face extra costs: Let businesses pay fees and take tests -- we don't want unlicensed tour guides describing famous statues incorrectly! But these costs add up. Often, they make a small, barely profitable business impossible to operate. These rules also violate Americans' right to free speech. They are unnecessary. If tour guides are no good, people can patronize others. The government doesn't need to be gatekeeper.

These rules generally prevail because existing businesses are politically connected. They capture licensing boards and use license rules to crush competition from businesses just getting started.

In some places, you can't open a business like a limo service or moving van company unless you can prove that your business is needed and won't undermine existing businesses in the same field.

But undermining competition is the whole idea. If Starbucks or Home Depot had to prove new coffee shops and hardware stores were "needed," we wouldn't have those companies. Apparently they were needed, since these companies thrived, but no one could have "proven" that beforehand.

The little guys don't have an army of lawyers to defend those islands of liberty one regulatory battle at a time. We should get rid of most of these regulations -- and sail back, together, to a free country.