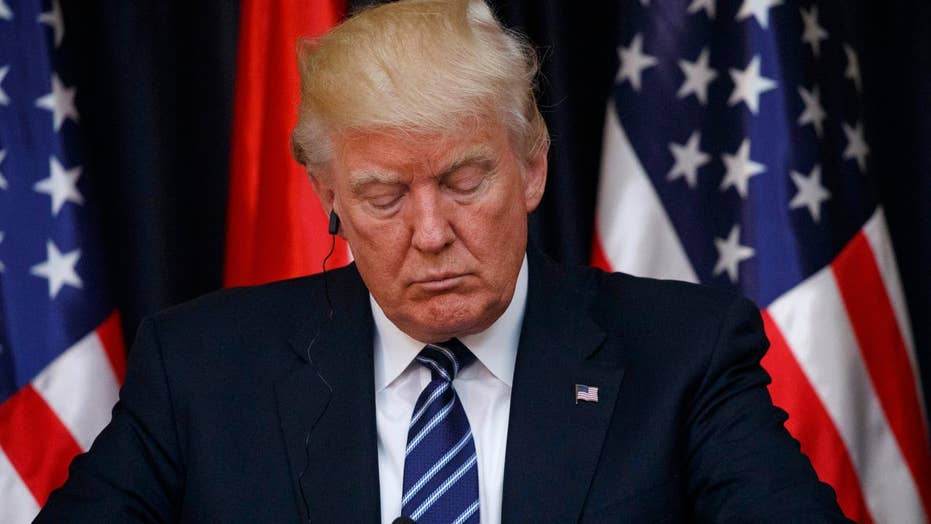 Kristin Fisher has more on the president's reaction

Visiting with Palestinian leader Mahmoud Abbas in Bethlehem yesterday, President Trump shared a key insight.  He noted that “Peace can never take root in an environment where violence is tolerated, funded and even rewarded.”  As Trump seeks to end a conflict that has resisted the best efforts of each of his predecessors going back to Ronald Reagan, he'd be wise to keep these words in the forefront of his mind.

The only way that Trump can succeed where these others have failed is if he identifies the mistake they’ve made and avoid repeating it.  While there’s plenty of blame to go around, there’s one clear lesson that emerges from the decades of failed peace efforts: so long as the Palestinians continue to support terrorism against Israel, they’ll never make the deep compromises that a peace deal requires.

From its earliest days, the fundamental premise behind the Israeli-Palestinian peace process was that the Palestine Liberation Organization (PLO) was finally ready to put down its guns, give up its dream of destroying Israel, and compromise. The process has failed because this premise has been false.

It’s important to remember that American presidents up to and including Jimmy Carter refused to speak to the PLO.  They rightly recognized that there was no point in a dialogue with a terrorist organization dedicated to Israel’s destruction. In 1988, President Reagan let it be known that he’d be willing to talk to the PLO if it renounced terror.  So PLO leader Yasser Arafat called a press conference and said something that sounded like a renunciation of terror (accounts of what Arafat actually said vary).  Reagan opened the promised dialogue.

A mere two years later, PLO members attempted to land a raft of armed terrorists on the Tel Aviv beach.  When Arafat refused to punish those involved, President George H.W. Bush suspended the dialogue with the PLO.  This is one time when Reagan’s sunny optimism could not prevail over a dark reality.

As the Oslo Peace Process got underway in 1993, Arafat sent a letter to Israeli Prime Minister Rabin renouncing “the use of terrorism and other acts of violence.”  President Clinton enthusiastically joined the peace effort and worked tirelessly to push the parties towards a final deal.  Eventually, Clinton persuaded Israeli Prime Minister Barak to offer Arafat a Palestinian State in 97% of the West Bank (with land swaps), half of Jerusalem and Gaza.

But Arafat turned the offer down.  Instead he began to compete with Hamas to see who could blow up more Israelis in a wave of terrorism that killed over 1,000 and maimed over 3,000 more. President Clinton realized too late that Arafat was no partner for peace.

President George W. Bush tried to learn from Clinton’s mistakes.  He rightly recognized that Palestinian terrorism was the primary obstacle to a peace deal.  And he correctly identified Arafat as an unrepentant terrorist.  So Bush began his 2002 peace effort – the Roadmap to Peace – by sidelining Arafat and insisting on a new Palestinian partner.

The partner he received instead was Arafat’s longtime deputy, Mahmoud Abbas.  On the surface, the trade looked like a good one. Abbas wears suits instead of military fatigues.  And he sought to stop the violence Arafat had escalated, noting that "the use of arms has been damaging and should end."

But like Arafat before him, Abbas renounced terrorism in word without ever doing so in deed.  Abbas failed to stop the wave of terrorism against Israel.  And Abbas’ own Fatah organization remained an active participant in the attacks.  Eventually, the Road Map process broke down. Bush was right about Arafat, but he realized too late that Abbas was no better.

In the years that have followed, we’ve all learned a lot more about Abbas.  He’s now compiled a long record of inciting his people to terror and honoring terrorists.  Even worse, he generously funds terror. In 2016, Abbas’ Palestinian Authority paid out roughly $300 million to Palestinian terrorists and their families.

When Trump met Abbas in the White House, he reportedly urged him to stop making these payments. This request set forth the minimum precondition to a serious peace process.  But Abbas has thus far refused to comply. If he won’t or can’t do this, then what basis is there to believe that he will make the far deeper and more controversial concessions that a peace deal would demand?

From Reagan’s day until yesterday, Palestinian support for terror has been the true test of whether the Palestinian leaders are ready to make peace.  President Trump should deal with this issue at the outset, before he stakes his legacy on the notion that Abbas and the PLO are really different this time.

David Brog is the executive director for the Maccabee Task Force and was the founding executive director of Christians United for Israel. Brog is also the author of the recently released book "Reclaiming Israel’s History: Roots, Rights, and the Struggle for Peace" (available now).