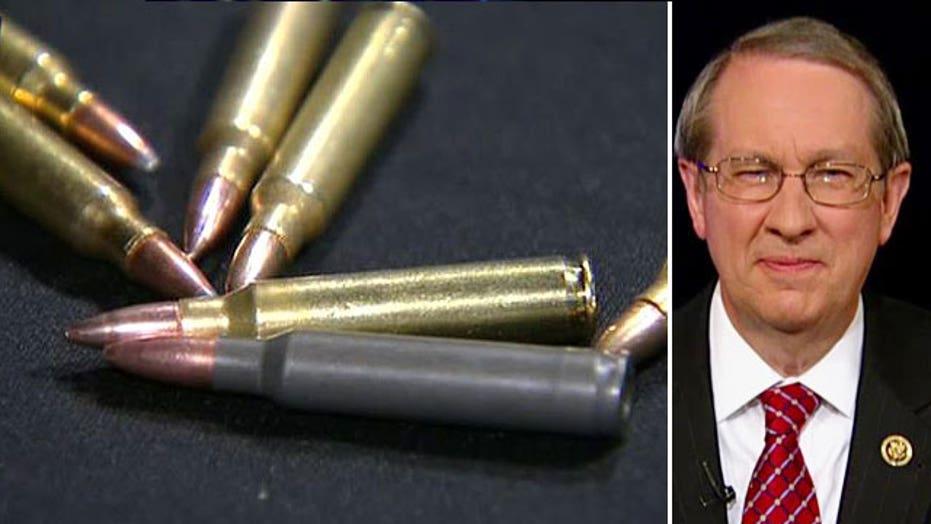 Rep. Goodlatte on plan to ban bullets by executive order

The president who promised to fundamentally transform America has been busy fulfilling his promise.

First, he started by twisting capitalism into a pretzel. A trillion tax dollars saved his donor pals at Goldman Sachs and his union buddies at General Motors under a "too big to fail" policy yet they blatantly threaten to bankrupt coal companies.

He picked his winners and losers.

The free market was no longer free.

Then he got to work on health care.

He had to do it when he did it because within months, he would lose the Democratic majorities he needed to pull off his political coup. And so health care in America was forever changed..

Next up.. President Obama took the laws of immigration  and shredded them to suit his liberal friends.

Forget what we the people have to say. It really doesn't seem to matter anymore..

Then came the one bastian of free speech, and the free flow of information.. the Internet.

One FCC commissioner said this of net neutrality:

It's a "solution that won't work, to a problem that doesn't exist."

That's from inside the FCC.

And now, there's an idea being floated by the president this week.

One that I think could be the most dangerous of all.

The administration wants to ban sales of certain types of ammunition. And once again the White House wants to do it in a way that bypasses Congress.

Folks, the most important rights our founders outlined in the constitution were freedom of speech and freedom of religion.

These are our First Amendment rights.

But in order to protect the First Amendment -- the founders were smart -- they gave us the Second Amendment.

The right to freely bear arms.

We have the Second Amendment to insure the first.

If the president is able to take over our Second Amendment -- the way he took over the free market, health care, immigration and the Internet, we will be administering the last rights to our first rights: free speech, religion and liberty.

The fabric of America is being shredded.

But it has to stop at the Second Amendment.

It's up to us to demand that they keep their hands off our guns..

Chew on that over the weekend.