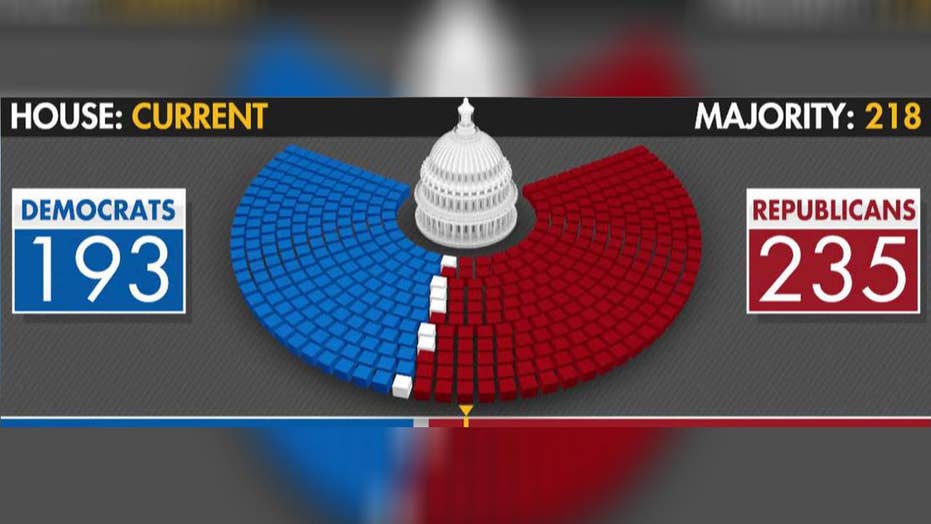 Breaking down the balance of power for the midterms

Analyzing different scenarios that could leave the House in either Democrat or Republicans hands.

Do you want to pay more to fill up your car, heat and cool your home, and power everything you own that runs on electricity? Do you think American companies are creating too many jobs and do you want to see the unemployment rate increase?

If you can honestly answer “yes” to all these questions you should vote for Democrats in the midterm elections Tuesday.

But if your answer is “no” you should elect Republicans to Congress who will support the cuts in taxes and cuts in unneeded government regulations that have been made by the Trump administration and the Republican Congress. Those cuts are responsible for our booming economy, the lowest unemployment rate since 1969, and a surge in domestic energy production that is holding down energy prices and creating jobs.

Democratic candidates are relentlessly attacking the GOP tax cuts. The Democrats want to pick the pockets of every American family and business now paying lower taxes under that law. In addition to cutting family incomes, that would hurt business that are creating jobs.

Pelosi sharply criticized Senate Majority Leader Mitch McConnell, R-Ky., who suggested that the only way to solve America’s growing debt crisis is to reform entitlement programs – notably Medicare, Medicaid and Social Security. McConnell said recently that America’s “disturbing” national debt is primarily the result of “a bipartisan reluctance to tackle entitlement changes because of the popularity of those programs. Hopefully, at some point here, we’ll get serious about this.”

Pelosi reacted angrily to McConnell’s comments, saying: “Like clockwork, Republicans in Congress are setting in motion their plan to destroy the Medicare, Medicaid and Social Security that seniors and families rely on, just months after they exploded the deficit by $2 trillion with their tax scam for the rich.”

Democrats and many in the media who are blaming the GOP tax cuts for our budget deficits are wrong. They’re just looking for an excuse to do what they love best – raising taxes.

In the 2017 fiscal year, the federal government collected $3.315 trillion, compared to $3.329 trillion in the 2018 fiscal year. Even better, in September this year the country enjoyed a budget surplus of $119 billion for the month. By comparison, in September 2017 there was a surplus of just $8 billion.

The reason revenues have slightly increased over the past year despite massive tax cuts is because the economy has been growing substantially, thanks in large part to the Trump administration’s pro-energy policies, regulatory rollbacks and the Republican tax cuts.

In the second quarter, U.S. gross domestic product increased by a whopping 4.2 percent annualized rate. To put that in perspective, President Obama never presided over a single year in which GDP growth topped 3 percent. In fact, 2 percent growth was heralded as the new normal by many politicians, pundits, and economists during the Obama presidency.

If the economy is surging and tax revenues aren’t falling, why are deficits continuing to rise? The answer is that government spending has significantly outpaced rising revenues. According to Treasury Department data, the United States spent $127 billion more in the 2018 fiscal year than it did in the 2017 fiscal year.

The increased spending includes $65 billion more on national defense and $43 billion on Social Security payments. Perhaps most stunning, however, is that Americans paid $325 billion in the 2018 fiscal year on interest payments to those holding U.S. debt – $62 billion more than what was spent in the 2017 fiscal year.

The biggest reason interest payments have grown so high in recent years is because the federal government ran huge deficits for the entirety of the Obama administration.

The Obama administration spent more money than every other presidential administration in U.S. history – in large part because President Obama signed a massive economic stimulus package into law and refused to reform America’s largest welfare programs, Medicare and Medicaid.

Combined, Medicare and Medicaid spending cost the federal government about $1 trillion in the 2018 fiscal year. Social Security cost an additional $988 billion. And as our population continues to age, the gap between Social Security’s costs and revenues is expected to become a major fiscal problem for the country.

The only way to fix America’s out-of-control debt crisis is to reform Medicare, Medicaid and Social Security – along with making other important spending cuts, just as McConnell noted.

Failing to take these steps will continue to push deficits ever higher, raising debt payments and crowding out other important government programs in the future. Contrary to many Democrats’ claims, raising taxes won’t solve these important problems.

Instead, we should demand the federal government play by the same rules as every household. If we and our families can’t spend far more money than we take in, why should our government?

A Republican House and Senate will work with President Trump to make needed entitlement spending reforms and make sensible spending cuts. But if Democrats win control of the House in Tuesday’s elections, as many expect, look for them to obstruct needed entitlement reforms and instead push for tax increases and greater government regulation – the wrong solutions, guaranteed to weaken our economy and hurt American families.