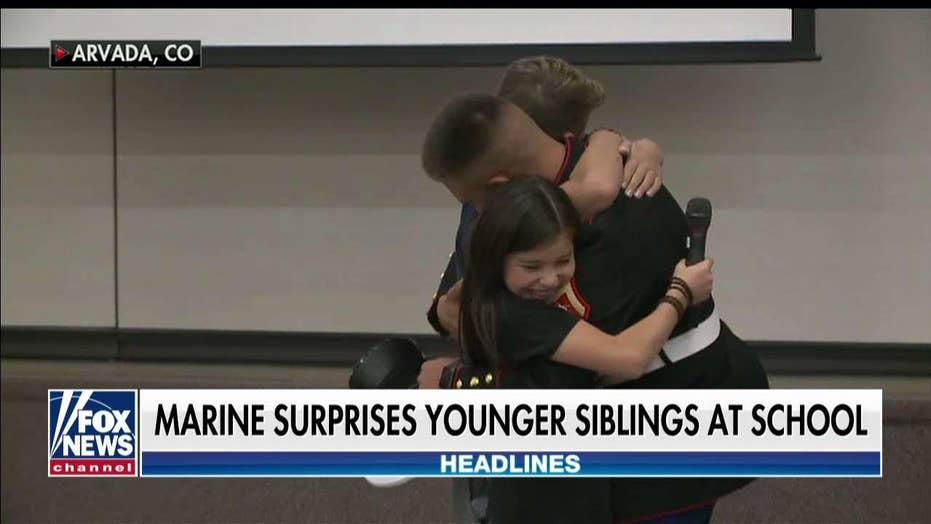 It’s Veterans Day in America, and all across the country Americans will pause to pay tribute to men and women who served in the armed forces of the United States. We have marked this day since the guns of the First World War fell silent on the 11th hour of the 11th day of the 11th month exactly 100 years ago today.

President Trump will observe this day in France at the Armistice Day Centennial Commemoration. For our part, my wife and I will meet with veterans and service members at Joint Base Elmendorf-Richardson in Alaska.

From the time of our nation’s birth, nearly 50 million men and women have answered the call to service, and nearly 20 million still walk among us today. Even now, a new generation of American veterans is being forged across the wider world

The debt our nation owes those who have worn the uniform is a debt we will never be able to fully repay. But just as those courageous men and women have fought for us, our entire administration has fought for them.

These courageous patriots have served the world over. From Bunker Hill to Belleau Wood and from the Coral Sea to Kandahar, American military members have offered their blood, toil, tears and sweat in service to our country. On Veterans Day we remember those who came home, but we cannot forget those who gave the last full measure of their devotion for our freedom.

It is written that “if you owe debts, pay debts; if honor, then honor; if respect, then respect.” The debt our nation owes those who have worn the uniform is a debt we will never be able to fully repay. But just as those courageous men and women have fought for us, our entire administration has fought for them.

Veterans have no better friend than President Trump.

This president and our administration understand that veterans’ benefits are not entitlements – they’re earned. They are the ongoing compensation for services rendered in the uniform of the United States. And since the outset of our administration, we’ve taken decisive action to make good on our promise to the heroes who’ve served.

President Trump has signed the most substantial veterans’ health-care reform in a generation, making Veterans Choice a permanent part of American law. Today our veterans have access to the real-time, world-class care they have earned, whether at a private health-care provider or the Department of Veterans Affairs.

This law will also improve the VA’s ability to recruit and retain quality health-care professionals, give veterans access to walk-in care, and expand health-care choices, including options for telehealth and mental health services.

President Trump has taken action to hold the VA accountable, signing the Veterans Accountability and Whistleblower Protection Act. Since our election, more than 4,200 VA employees have been fired, suspended or demoted for negligent behavior.

We enacted the Veterans Appeals Improvement and Modernization Act, which will improve our efforts to provide retroactive benefits to America’s veterans. The VA has already identified and paid over $115 million over the last year.

We have also made historic progress towards ending veteran homelessness. Thanks to our reforms at the VA and the Department of Housing and Urban Development, nearly 54,000 veterans found permanent housing and access to supportive services last year.

And President Trump has taken steps to increase opportunities for veterans after they return to civilian life, including through enhancing and expanding the post-9/11 GI Bill to a lifetime benefit.

Our actions are having a real impact on the men and women who have sacrificed for our country: health-care wait times are down, VA accountability is up, and under our administration unemployment among veterans has reached its lowest level in nearly two decades.

While we honor our veterans by ensuring they receive the benefits they have earned, we also honor them by supporting the men and women who serve in the armed forces today.

With the strong support of veterans’ organizations across the nation, President Trump signed into law the largest investment in our national defense since the days of Ronald Reagan. We are once again giving our soldiers, sailors, airmen, Marines, and Coast Guardsmen the resources and training they need to accomplish their mission.

The United States of America remains the land of the free because we are still the home of the brave. The men and women who’ve served in our armed forces are those brave, and today all of us should do our part to honor their service and appreciate their sacrifice.

So on this 100th Veterans’ Day, I encourage every American to thank a veteran. Outside the grocery store, at your place of worship, or maybe over the backyard fence, I urge you to extend your hand, look them in the eye, and say those words that every veteran deserves to hear: “Thank you for your service.”

To all of those who’ve worn the uniform, on behalf of a grateful nation, Happy Veterans Day.

Mike Pence is vice president of the United States.