Kristen Waggoner, general counsel at Alliance Defending Freedom, reacted to a new video of Yale Law students disrupting an event about the importance of free speech.

It is easy, and right, for Americans to wave the now ubiquitous blue-and-yellow striped flag to support the Ukrainians’ courageous fight to maintain their independence and stand against Vladimir Putin’s tyrannical regime. But inside many of our country’s most elite institutions, tyranny, not freedom, prevails.

I recently spoke at Yale Law School, and a mob of nearly 120 law students showed up to hurl insults and disrupt a legal panel discussion about remedies for First Amendment violations.

I, a conservative Christian, was there alongside another lawyer, a progressive atheist, to engage in earnest dialogue on an issue of mutual concern. While we vehemently disagree on some very important issues, we were hoping to demonstrate how to engage in civil discourse and find common ground where possible. Ironically, that common ground was a U.S. Supreme Court free speech case that I argued that united both sides of the political spectrum. What could be so controversial about that?

But rather than listen and engage in civil dialogue, the vitriolic mob shouted down their professor, who was moderating, and then me. Then they childishly chanted, pounded on classroom walls, and reportedly disrupted nearby classes and meetings. Members of the venerable Federalist Society—the group that organized the event—were harassed and physically threatened by their fellow law students. The situation was so volatile that we required an armed police escort to leave campus.

What concerned me most—and should deeply concern all of us—was a room full of future lawyers, legislators, jurists, and corporate executives who would rather bang on walls, use obscene gestures, and engage in name-calling and physical intimidation rather than behave like adults. Critical thinking, intellectual curiosity, and civility are hallmarks of exceptional lawyers and leaders. But these students sought to silence ideas—and people—they disliked through bullying and intimidation.

Mob rule looks a whole lot like tyranny, and this mob has Yale administrators under its power. In a weak statement issued Thursday, Yale defended the student disruptors, grossly downplayed the chaos they wrought, and referred to the university’s "bedrock commitment" to be able "to speak freely."

I, for one, was not able to speak freely. University officials failed to enforce their own free speech policy that bars students from "interfer[ing] with speakers’ ability to be heard and of community members to listen," as multiple audio clips reveal. 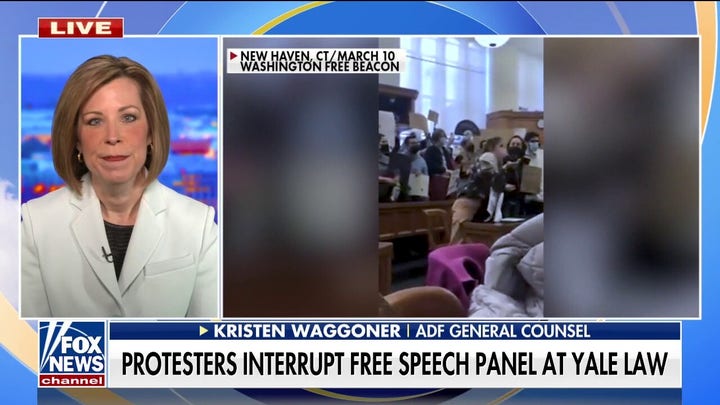 In its statement, Yale Law officials also said—wrongly—that a police presence was not needed, apparently trying to appease the two-thirds of the Yale Law students who signed a letter complaining that police got involved in what the students inaccurately called a "peaceful" dialogue. Yale Law administrators would apparently rather curry favor with the mob than insist on a free-speech culture.

As my fellow panelist, Monica Miller of the American Humanist Association, recognized in an interview, the behavior of the students was an ominous sign for the legal profession: "As lawyers, we have to put aside our differences and talk to opposing counsel. If you can’t talk to your opponents, you can’t be an effective advocate."

Perhaps that sentiment is why a federal appeals court judge reportedly sent an e-mail to all federal judges urging them to think twice before hiring any Yale student who participated in the speech-censoring activities on March 10, stating, "All federal judges—and all federal judges are presumably committed to free speech—should carefully consider whether any such student so identified should be disqualified for potential clerkships." It may also explain why the New York Times editorial board declared that "America Has a Free Speech Problem," warning that cancel culture is causing Americans to lose confidence in their ability to speak freely.

For Yale Law to regain its respect and reputation, it must reverse course. Administrators cannot allow juvenile mobs to trash civil dialogue. Yale—and every other academic institution—must stand as the very epicenters where free speech prevails, where we can civilly debate the most polarizing issues of our day.

As for me, this experience has only deepened my resolve to give a voice to the thousands of students who have faced this kind of bullying and intimidation on their own campuses. At Alliance Defending Freedom, we speak truth but always strive to do so with kindness, compassion, and charitable resolve. The answer to disagreement must always be more speech. There’s too much at stake to remain silent.