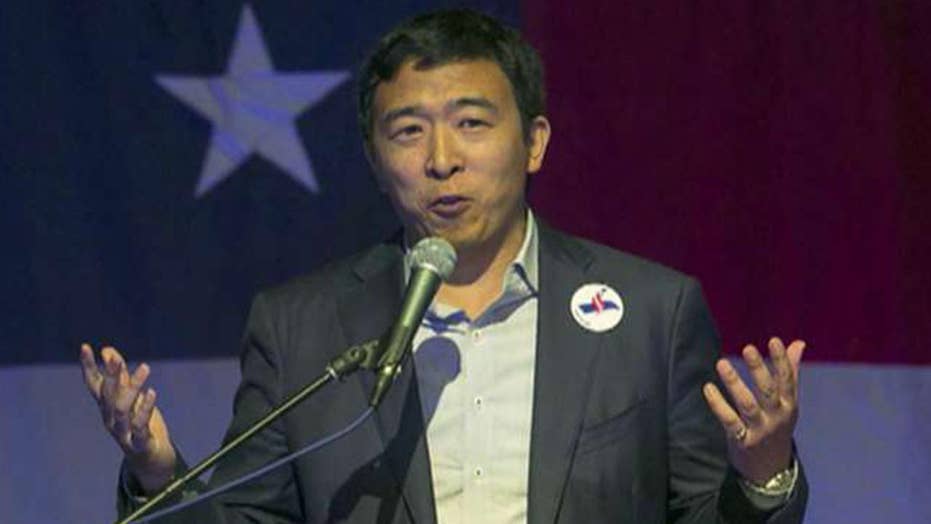 Will universal basic income be a campaign platform for the Democratic Party in 2020?

Charlie Gasparino, Jessica Tarlov and Jillian Melchior weigh in on which candidates can be expected to support a universal basic income in the 2020 election cycle.

The idea of giving people a “basic income” is neither new nor untested. It has figured in conceptions of a utopian state since, well, Thomas More wrote Utopia over 500 years ago.

Today, universal basic incomes are espoused by tech titans concerned that future workplaces will replace humans with robots, and by some progressives who wish to prop up people “unwilling to work,” as the Green New Deal put it.

Even some conservative intellectuals, such as Milton Friedman, have proposed variations of a universal basic income to replace the welfare state, most regulation, and labor laws like the minimum wage. But this is unlikely to happen regardless of the merits of such a trade (and there are many).

The tech titan claim that robots will soon replace humans is overblown. Technological unemployment is a fear as old as time. Some types of work are always being replaced by new technologies, but that doesn’t mean that the workers themselves are replaced. Rather they are often absorbed into new forms of work. Today’s advocates argue that “this time is different.” But of course, that same argument has accompanied every fundamental change in the economy.

This is not to say that the fear of technological unemployment isn’t real. In 2018, Paul McClure, a professor of sociology at the University of Lynchburg, found that 40 percent of Americans are afraid of automation and the pace of technological change.

But history is full of examples of these fears being unfounded. President Franklin Roosevelt’s economic advisers worried that technological advances made during the World War II production effort would eliminate so many jobs that unemployment would skyrocket when the soldiers returned home. No such thing happened.

The progressive version of the basic income isn’t rooted in technological unemployment. Rather it’s a mechanism for redistributing money. It’s based on the idea that everyone is entitled to an income, whether they’re willing to work for it or not.

The progressive version of the basic income isn’t rooted in technological unemployment. Rather it’s a mechanism for redistributing money. It’s based on the idea that everyone is entitled to an income, whether they’re willing to work for it or not.

For progressives, non-work is a feature of the basic income system, not a bug. They say that, if we were to adopt a basic income, the arts would flourish, entrepreneurship would rise, and workers would have more bargaining power.

But the results of basic income experiments are mixed, at best.

In Finland, researchers found that a two-year pilot program providing a basic income to 2,000 unemployed people produced no meaningful changes to entrepreneurship. Other studies found some improvements in health and educational outcomes, but the gains realized are small compared to those achieved by more targeted policies.

Closer to home, Ontario, Canada pulled the plug on its basic income experiment only 15 months into its scheduled three-year run. The pilot program, restricted to low-income people only, replaced their unemployment, pension and disability benefits with a generous basic income. The government cited excessive costs as the reason for terminating the program early.

In America, a basic income program would be a far departure from the safety-net programs now in place. We have compulsory social insurance systems for those who work, and means-tested entitlements intended for people who would work but cannot for whatever reason. In other words, people who can work are expected to pay their own way and those who cannot are covered by welfare.

Basic income programs also have a political weak spot that emerges over time. While “money for nothing” proposals may have broad appeal, in practice these programs tend to provide much larger transfers to childless, healthy adults than current programs do. This is simply not a group that garners a lot of sympathy.

The sustainability of any basic income program depends on whether a democratic system could support and afford it over a period of time. And basic income programs are very unstable. Canada and Finland abandoned their experimental programs early because of cost and political concerns.

Mayor Baraka may move forward with his experiment. But real-world experience suggests it will be unsuccessful and short-lived.

Paul Winfree is the director of The Heritage Foundation’s Roe Institute for Economic Policy Studies.