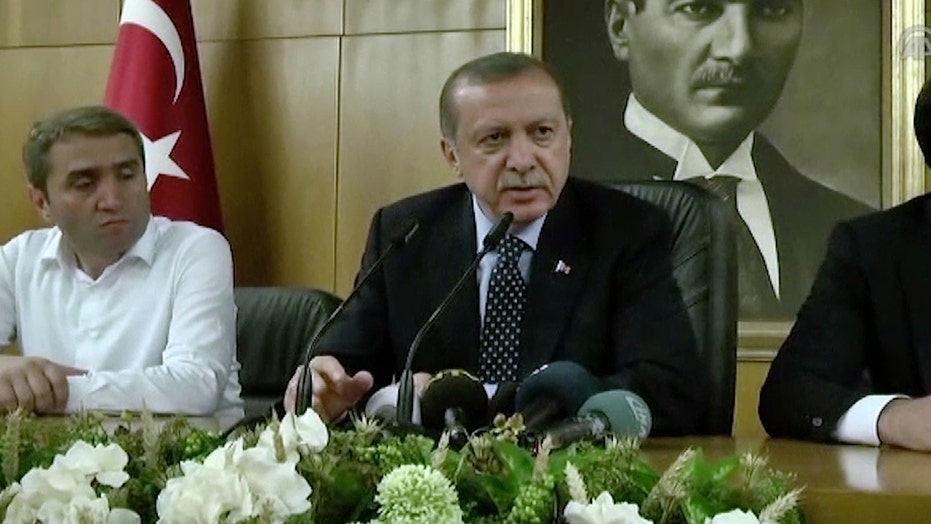 If today’s Western leaders possess one general trait, it’s a genius for self-deception. Insisting that Islamist terror has nothing to do with Islam, or that religion has no strategic impact, or that all human beings want freedom and democracy, amounts to declaring that up is down, right is left and night is day.

And midnight is coming for millions in Turkey, even as we insist that a dying flashlight is the sun.

Over the past few years, many Americans heard the term “caliphate” for the first time as ISIS declared that the territory it seized from Iraq and Syria was the caliphate reborn. To us, “caliphate” appeared to be just another name for a vast torture chamber. But for hundreds of millions of Muslims, many of whom have nothing to do with ISIS, the caliphate is associated with a lost and much-romanticized golden age when the caliph, who was also the Turkish sultan, claimed spiritual dominion over all Muslims.

In the 14th century, the Ottomans revived the still-older concept of a caliphate, declaring that the sultan and caliph were one. It remained so until 1924, when Mustafa Kemal Ataturk, the great modernizer, abolished the office as a relic, insisting that Turks had to build a new Turkey and not lay claim to an enervating empire, temporal or spiritual.

At the time, the Muslim world split into two camps. On March 8, 1924, The Economist captured the difference: For Turks and other nationalities newly free of Ottoman rule, “the Western idea of nationality is in the ascendant and the Caliphate is losing its power over the imagination.” So far, so good.

But the journal went on to note that for Muslims under colonial rule, “the Caliphate carries a message of salvation through an international Muslim solidarity.”

That message of salvation, if not yet of solidarity, is back. The ragtag ISIS caliphate is merely the forerunner of the more ambitious caliphate to come.

Convinced that history has no relevance, those same self-deluded Western leaders and diplomats refuse to recognize President Recep Tayyip Erdogan’s vision for “his” Turkey. He dreams not only of neo-Ottoman glory, but of a caliphate reborn and led by a Turk. (Might anyone venture a guess as to his candidate?) Essentially, the sultan and caliph both would be back on a Turkish throne.

If you decline to acknowledge what a man wants, you’ll find it hard to understand what he does. The immense and destructive crackdown underway in Turkey now, with at least 10,000 Turks taken into custody and as many as 100,000 others dismissed from their positions — not only soldiers, but judges, civil servants, police and academics — isn’t an end-game. It’s a beginning.

Declaring a state of emergency in the wake of the botched coup attempt, Erdogan and his allies claim that 100,000 Turks were in on the plot.

It’s one of the most preposterous claims of our time, but it does the job (any coup with that many conspirators wouldn’t have remained a secret long—coups don’t work that way).

Erdogan didn’t need a reason for this pre-planned purge. He had his reasons and his lists of names. He needed an excuse. The failed coup was a gift.

Now we’re witnesses to the destruction of Turkey’s secular society and the forced-march reversion to religious regimentation and obscurantism, to intolerance and oppressive fundamentalism. This is the triumph of mosque over modernity, not of the rule of law, but of its supersession. It took almost a century in Turkey, but faith proved stronger than civilization again — a trend across the bleeding Islamic world.

Professors have been forbidden to leave the country. The government demanded the resignation of all the deans of higher-level schools and universities. Book-banning is on the way, and book-burning wouldn’t surprise me in the least.

Erdogan also used the coup to demand the extradition from the United States of Fethullah Gulen, a cleric and one-time ally. Shamelessly insisting that Gulen orchestrated the coup attempt from the Poconos, Erdogan is determined to crush even the faintest spark of dissent or resistance.

Various observers have likened the coup’s effect to that of the Reichstag Fire, the murky arson at the German parliament that provided Hitler with the excuse to stamp out all political opposition. The parallel is chillingly precise. The Turkish intelligentsia is about to find itself in the precarious condition of Germany’s intellectuals and Jews in the 1930s.

Erdogan wants power for himself, but he also, sincerely, wants it for his faith. He’s a true believer and a megalomaniac. His ambitions will ultimately lead Turkey, its neighbors and, quite possibly, its blind, bewildered allies into a succession of bloody tragedies, but for now he has real support among half of the population, those for whom the fever of faith is the ultimate intoxicant. He polls better than Hitler did. “Mein Kampf” is no match for the Holy Koran.

In recent years, the term “Islamo-fascism” has been thrown around a good bit, usually by those who understand neither Islam nor fascism. But “Islamist fascism” genuinely fits Erdogan’s program: populist intolerance justified by faith and harnessed by a leader who explains any failure in terms of victimhood. Erdogan offers exaltation and revenge, the tastiest dish in politics.

And, as in Nazi Germany, those confident citizens who deluded themselves that the new leader could be managed find themselves in prison cells or desperate for visa stamps in their passports (if their documents haven’t already been confiscated).

The double-speak language, the naked propaganda, is present, too — as in Erdogan’s claim that his purge of the opposition will strengthen Turkish democracy. His version of democracy is less convincing than Putin’s.

From Reichskanzler to Fuehrer, or from president to sultan-and-caliph, to Erdogan the step appears inevitable. It’s only a matter of timing.

Among the would-be sultan-and-caliph’s cynical initiatives this week has been floating the revival of the death penalty for treason — in order to finish off key opponents permanently and intimidate those permitted to survive. But the real execution warrant has been issued: Erdogan killed the secular Turkey of Ataturk, the dream that a Muslim nation could take its place in the front rank of civilization.