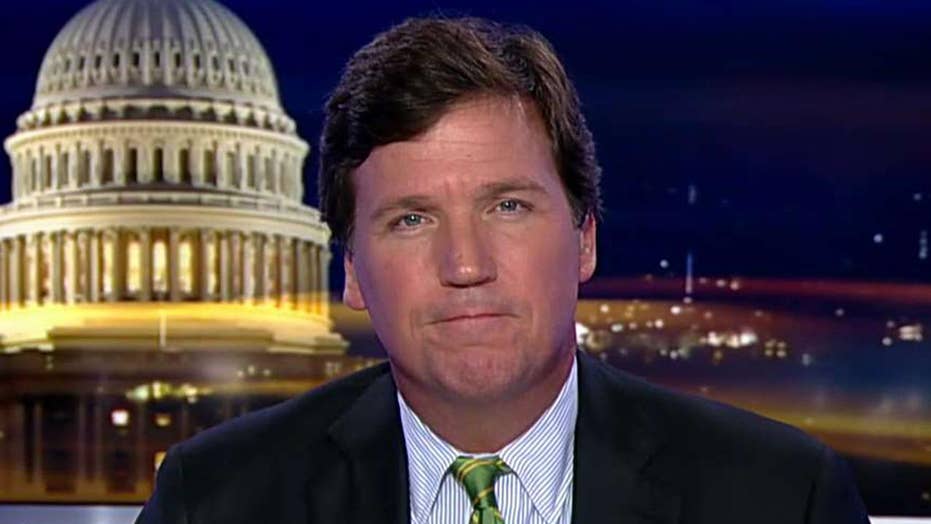 Tucker: What are the Democrats running on?

At the core of any political campaign is the message, what it's about. What exactly are next Tuesday's midterm elections about?

Well, on the one side, it's pretty clear. Donald Trump, who is the leader of the Republican party and in effect, it's only spokesman, says that a vote for Republican candidates is a vote for secure borders and against crime and chaos. You don't have to believe the president when he says this but it's definitely what Republicans are running on.

What are Democrats running on? That's less clear. They're against Trump, certainly. Democrats talk about the president even more than he talks about himself -- which is a lot! They don't like him at all. Fine. But despising someone isn't really a platform or path forward, at best it's a reaction.

If you want to know what Democrats are thinking? Watch CNN and MSNBC. Wednesday night was especially instructive.

Here are two contributors to MSNBC. One writes for "The New York Times." The other is at Princeton which is an Ivy League college in New Jersey.

Both have impressive credentials, both are considered deep thinkers by most of the other people in this country who think of themselves as intellectuals. Here’s how they explained what they have learned since the 2016 election:

EDDIE GLAUDE, PRINCETON UNIVERSITY; MSNBC ANALYST: What I did wrong in 2016 is I overestimated white people. I didn't think white people would put him in office.

Now there was a time, not so long ago, just a few years ago really, when language like this was considered textbook race hatred even by liberal Democrats. You weren't allowed to blame entire races of people for anything. You weren't even supposed to think of your fellow Americans primarily in terms of their race -- and skin color is one thing that nobody can control.

To paraphrase a long time liberal hero whose ideas are now ignored, what matters is the content of a person's character. But not anymore. Now the opposite is true, identity is everything. Here is CNN's Don Lemon on Monday night:

“So, we have to stop demonizing people and realize the biggest terror threat in this country is white men, most of them radicalized to the right. And we have to start doing something about them. There is no travel ban on them. There is no ban on -- You know, they had the Muslim ban, there is no white guy ban. So, what do we do about that?”

"We have to start doing something about them, these people of a certain skin color." That's what Don Lemon said.

Now before you get too outraged about that and stop watching his show every night, keep in mind that Don Lemon is a cable news host, he's on LIVE television, five hours a week. He's bound to say something indefensible once in a while, they all do. We can actually vouch for that having done it ourselves -- unfortunately.

But here are the rules. When you say something awful that you can't defend, don't try to defend it. Apologize. Explain what you meant and move on. Vow to do better. That's a rule for life, not just television news. We all learned it as kids. On the left though, it no longer applies.

Here's what Don Lemon said Wednesday night about his remarks on Monday:

“I said that the biggest terror threat in this country comes from radicals on the far right, primarily white men. That angered some people. Their analysis shows that for every eight deadly attacks by right-wing extremists, there were one by left-wing extremists. Those are the facts. So, people who were angered about what I said are missing the entire point. We don't need to worry about people that are thousands of miles away. The biggest threats are homegrown.”

If you didn't like what I said, that's your problem. You'll notice the lack of contrition when Don Lemon said, we have to start doing something about Americans of a certain skin color.

It turns out it wasn't a mistake -- he meant that. He didn't apologize because nobody in his world asked him to. They are all saying pretty much the same thing.

This is now a common view in the Democratic Party, it's one of the things they're running on.

Now lots of Americans won't like that message obviously but Democrats are not concerned about that. They no longer care what those Americans think. They've given up on trying to represent them. -- And that's why they fight harder to provide birthright citizenship for foreigners than they ever fought to protect American citizens from heroin or plunging middle-class wages or privacy-destroying tech monopolies.

They know who their constituency is.

That also explains their sudden sympathy for lawbreakers over everyone else.

You already know about the Democrats' demand that America ignore its own immigration laws, but it's gone far beyond that.

Elizabeth Warren, who is the Democratic senator from Massachusetts and who is running for president in 2020, has condemned our entire criminal justice system as irredeemably racist.

Meanwhile, Democratic cities around the country have decided that laws against crimes like shoplifting and public urination and others can no longer be enforced because that would be racist.

Now the result of all of this is inevitable. It's always the same -- everywhere. There’s more crime. And you're already seeing that in many places.

Turns out the crime victims are not cloistered rich people like Beto O'Rourke, they are normal people of all races. Crime hurts everyone but it tends to hurt the poor the most.

If that's occurred to Democrats, they haven't mentioned it. They're feeling good about themselves right now. They know they're likely to win back the House on Tuesday and they're feeling vindicated, more self-righteous than ever.

We searched long and hard today for a comment on tape that could sum up the Democratic worldview, right now and we found this. It was shot by a network cameraman covering the president's trip to the Tree of Life synagogue in Pittsburgh, this week. The protester screaming at the president happens to be a Presbyterian minister. Here’s what she said:

“You are not welcome here! We welcome everybody.” Well, that's pretty much the whole Democratic message right there.

Will it work? Maybe on Tuesday, maybe for a little while.

Angela Merkel tried it in Germany. So did the people who until recently ran Brazil, but ultimately their countries rejected that message.

Voters want you to care about them, it's their country. And they'll know it if you don't care about them. And in the end they will punish you for that, they always do.