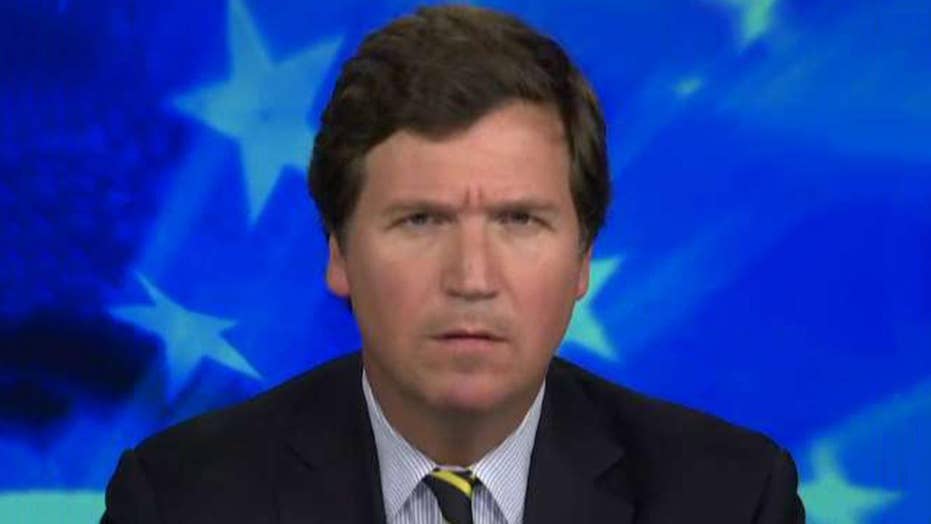 Tucker: When political debate is turned into sectarianism

The apparent pipe bombs sent to a variety of prominent Democrats have received huge media attention in the past few days and rightly so. The whole thing is horrifying.

But they are not isolated acts. Political terrorism suddenly seems like part of the landscape of this country. Riots, vandalism threats, envelopes filled with white powder, physical attacks. Virtually every few days brings a new example of this in this latest case.

In this latest case, the details remain sparse, but the reaction has been predictable and depressing. You've seen all the usual dumb people on television leveraging the moment to make scripted partisan points or boost their cable news ratings, as they invariably do.

CNN blamed Trump for "inciting a serial bomber." Jeff Zucker, head of that channel, tried to draw a connection between the president's dislike of the media and acts of terror. In other words, this is what happens when you criticize us. It went on like this all day with maximum self-righteousness.

At a Trump rally on Wednesday night, the crowd shouted, "Lock her up" when he mentioned Hillary Clinton's name. All of it seemed normal. And in fact, it was. This is all normal now. Two parts of the same country that despise each other so much, that there's almost nothing one can't imagine the other doing, including encouraging acts of terrorism.

This is ominous. We're not supposed to hate our fellow Americans this much. The question is how did we get here? And there are lots of reasons. Our leaders made a series of terrible decisions and never apologized for them.

The middle-class died and nobody noticed. New technologies that were supposed to unite us, instead drove us farther apart. A rotten education system, disintegrating family, shocking rates of substance abuse, all of those played a role. There were other factors too.

But more than anything, our thinking changed, that's what really happened.

Over time, we stopped debating politics, issues and ideas and we started attacking each other for things we can't change for who we are.

Take immigration, 20 years ago, we'd be arguing about how many migrants to admit into this country under what circumstances, whether or not it was all good for America, none of that is seriously under discussion today. Instead we get moments like these where people publicly say things like this:

“What is happening here is a sin against God.”

“The hypocrisy of all people of faith in our country, not to clamor for this -- for what the administration is doing to end.”

And Hillary Clinton speaks out and says, “Those who selectively use the Bible to justify this cruelty are ignoring a central tenet of Christianity. Jesus said, suffer the little children unto me. He did not say let the children suffer.”

A sin against God. What you're hearing is not political debate, its theology. It's not based in reason, but in something deeper, something less predictable and more ferocious. It's a religious argument. Those are not resolvable, that's why you were told not to start them at the dinner table.

Religious disputes push people into extremism. If I think your ideas are wrong, I'm happy to argue with you about them. But if I decide you're evil, I may be tempted to hurt you, if only in self-defense.

Politics like this isn't really politics. It's sectarianism and ultimately it's an incitement to violence. Months ago we invited Congressman Beto O'Rourke of Texas onto this show to discuss whether the United States should provide free health care to illegal aliens.

Beto O'Rourke is not stupid, but like so many in our political class, he has adopted a habit of mind that leaves no room for legitimate disagreement with his own views. If you're opposed to paying for health care for illegal aliens, you're in favor of watching people die. You're morally corrupt.

Why would anyone waste time trying to reason with a monster like that? Would you debate human rights with Idi Amin, of course you wouldn't? You already know where he stands, because you know what sort of person Idi Amin is. Facts are irrelevant. His character and motives are all that matter.

And increasingly that's what we argue about: character and motive. Here’s anexcerpt from an exchange I had with Congressman Adam Schiff of California. The question we raised was whether we know conclusively that the Russian government hacked John Podesta's e-mail account during the 2016 election.

Schiff happens to be one of the few people who might know the answer to that. He's the Ranking Democrat on the House Intelligence Committee. Here’s how our conversation went:

CARLSON: Can you look right into the camera and say I know for a fact the government ofVladimir Putin was behind the hacks of John Podesta's e-mail?

REP. ADAM SCHIFF (D), CALIFORNIA'S 28TH DISTRICT: Absolutely. The government of Vladimir Putin was behind the hacks of our institution and dumping of information--

SCHIFF: Not only in the United States--

SCHIFF: --but also in Europe.

CARLSON: OK. You're not. You know what, you're dodging the question.

CARLSON: Look and say, I know they did John Podesta's e-mails, they hacked those.

SCHIFF: And I think that Ronald Reagan will be rolling over in his grave--

SCHIFF: You are carrying water for the Kremlin.

CARLSON: You're making -- look, you're sitting member of Congress on the Intel Committee and you can't say they hacked--

SCHIFF: You're going to have to move your shoulder to RT, Russian televisions, because--

In other words, Schiff replied, I don't care what you're asking. The question is why you're asking it. And the answer, of course, is because you are a bad person. In this case a traitor to your country.

Increasingly most political conversations look like this. When we want to defeat someone we disagree with, we no longer argue against what they believe. We wait until they make a mistake, until they say something stupid, even unintentionally, and then we pounce. We don't consider their explanation. We refuse to accept their apologies. There is no forgiveness.

The point is not to make things right or to improve anything, the point is to vanquish an enemy.

Now it should be said, it's not just Democrats who do this though, obviously, they do lead the category, "Lock her up", that's not something any politician can do or should do -- even to Hillary Clinton.

Criminal guilt is for courts and judges to decide. It has to be.

And what about this, the Reverend John Kasich -- he's also the Republican Governor of Ohio. Here’s how he explains that when you disagree with him, you are really disagreeing with God.

“We've got to start putting ourselves in the shoes of other people. We've got to start thinking about the consequences that others suffer. And if we've been spared those by the grace of God, let us be appreciative, let us count our blessings and let us reach out to those who have less. …

And let's stop putting up walls around ourselves and not understanding the plight, the trouble and the problems of others. It is not right and the Lord doesn't want it. And our people at their hearts, want to reach out to others. … Look at what they do in these storms. They go and they rescue people they don't know. They put them in their homes. They feed them, that's America.”

What's easy to know and to foresee is what happens to a country where the people in power claim moral authority they don't have in order to compel you to obey.

What happens is that resentment builds, factions form, craziness starts to seem normal.

It is all bad. And if you want to fix it, stop talking like this.