Tucker: If Trump campaign has voter fraud proof, we need to see it

On Thursday, Rudy Giuliani and a number of President Trump's other lawyers held a press conference on the topic of voter fraud. If you didn't actually see it, you've probably heard about it by now.

Giuliani, along with former federal prosecutor Sidney Powell and a number of others, alleged that the 2020 election was stolen from Donald Trump. To demonstrate that, they exhibited some of what they found after two weeks of investigating. The presentation went on for 90 minutes with many different threads, about which more anon.

How you viewed it depended largely on who you voted for. Trump voters seemed hopeful that it might change the election results. The left and virtually every single person in the news media immediately dismissed it as an embarrassing clown show as well as a threat to the republic. That's right: the very same people who swore that Vladimir Putin's agents controlled the U.S. government called it a conspiracy theory.

A lot of Americans believe this election was rigged. They're not saying that because they're crazy and they're not just saying it because they're mad. They mean it, and that's a potentially fatal problem for this country. Elections aren't merely "central to democracy", elections are democracy. Voting is the way the public expresses its will. It's all people have. If elections don't work, our entire system doesn't work.

Everything in this country depends on fair elections, and it's obvious even now that we don't have them when access to basic information is restricted and weaponized by a partisan billionaire class. Google and Facebook are far greater threats to our system than Russia has ever been, and we need to fix that immediately.

But back to Thursday's press conference, which Giuliani kicked off by saying the Democrats stole the election by means of coordinated fraud in a number of states. Giuliani did not conclusively prove that, but he did raise legitimate questions and in some cases, he pointed to what appeared to be real wrongdoing. At one point, Giuliani held up an affidavit from a worker in Detroit called Jessy Jacob alleging fraud in that city's polling places.

GIULIANI: She was assigned to voting duties in September and she was trained by the city of Detroit and the state of Michigan. She was basically trained to cheat. She said that "I was instructed by my supervisor to adjust the mailing date of these absentee ballot packages to be dated earlier than when they were actually sent in. The supervisor made that announcement for all workers to engage in that fraudulent practice." That's not me saying that. That's just American citizens saying that under oath.

What Giuliani said is correct. This is the sworn statement of an American citizen made under oath and under penalty of perjury, so you cannot dismiss it out of hand. Jacob goes on to say that her supervisor told her not to check the photo IDs of voters when they arrived. She says she saw city employees coaching voters on who to vote for, as well as voters voting more than once.

Is any of that provable? Is it true? Well, we should find out, not because Michigan is a swing state, but because voter fraud is a direct attack on our democracy.

But the media don't want to know. They're not interested. If you watched the coverage after the press conference today, you saw credentialed reporters, some of whom we know and like, actually, refuse even to acknowledge it.

No mention whatsoever of the contents of what they described as "what he says are sworn affidavits." Giuliani says that the Jacob affidavit has been made public, but they can't be bothered to check. Instead, they launched new editorials about how dishonest and crazy Rudy Giuliani is, as if their job was to rebut Rudy Giuliani.

But that's not their job. Their job is to explain what just happened, preferably with some detail so that viewers at home can make up their minds. They didn't do that. Behavior like this does not help anyone and diminishes the news media's tiny remaining reserve of credibility. It certainly doesn't inform the public

Giuliani claimed that voters in Philadelphia and Pittsburgh were allowed to change their ballots after the fact -- a process known as "curing the ballots" -- by the Democratic secretary of state, while Republican counties were not. That's checkable.

He said dozens of Republican voting inspectors in Pennsylvania weren't allowed near mail-in ballots and have signed affidavits saying so. That's another easily checkable claim.

Giuliani said that mail-in votes are easier to falsify and harder to verify than traditional voting. That's clearly true, everyone knows it's true, and it's a major problem. Pretending otherwise is a lie.

Then Giuliani got to the way votes are counted in this country. The process is mostly electronic. Giuliani suggested that electronic vote counting is an invitation to fraud, and he's right. That's why Canada, for example, doesn't do it. 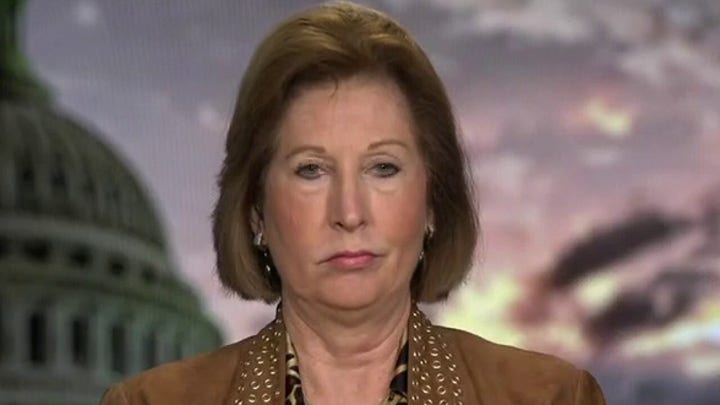 All of which brings us to the bombshell at the center of today's press conference that was delivered by Powell, who also serves as Gen. Mike Flynn's lawyer.

For more than a week, Powell has been all over conservative media with the following story: This election was stolen by a collection of international leftists who manipulated vote tabulating software in order to flip millions of votes from Donald Trump to Joe Biden. The other day on television, Powell said of Trump that when the fraud is finally uncovered, "I think we'll find he had at least 80 million votes." In other words, rigged software stole about seven million votes in this election.

On Sunday night, "Tucker Carlson Tonight" texted her after watching one of her segments. What Powell was describing would amount to the single greatest crime in American history. Millions of votes stolen in a day, democracy destroyed, the end of our centuries-old system of self-government. Not a small thing.

Now, to be perfectly clear, we did not dismiss any of it. We don't dismiss anything anymore, particularly when it's related to technology. We've talked to too many Silicon Valley whistleblowers and we've seen too much after four years on the air.  We literally do UFO segments, not because we're crazy or even interested in the subject, but because there is evidence that UFOs are real and everyone lies about it.

There's evidence that a lot of things that responsible people dismiss out of hand as ridiculous are, in fact, real. The louder the Yale political science department and the staff of The Atlantic magazine scream "conspiracy theory," the more interested we tend to be. That's usually a sign you're over the target. A lot of people with impressive-sounding credentials in this country are frauds who have no idea what they're doing. They're children posing as authorities. And when they're caught, they lie and then they blame you for it. We see that every day. It's the central theme of our show and will continue to be.

That's a long way of saying we took Sidney Powell seriously, with no intention of fighting with her. We've always respected her work and we simply wanted to see the details. How could you not want to see them? So we invited Sidney Powell on the show. We would have given her the whole hour. We would have given her the entire week, actually, and listened quietly the whole time at rapt attention.

But she never sent us any evidence, despite a lot of polite requests. When we kept pressing, she got angry and told us to stop contacting her. When we checked with others around the Trump campaign, people in positions of authority, they also told us Powell had never given them any evidence to prove anything she claimed at the press conference.

Powell did say that electronic voting is dangerous, and she's right, but she never demonstrated that a single actual vote was moved illegitimately by software from one candidate to another. Not one.

Why are we telling you this? We're telling you this because it's true, and in the end, that's all that matters. The truth is our only hope and our best defense. It's how we're different from them: We care what's true and we know you care, too. Maybe Sidney Powell will come forward soon with details on exactly how this happened and precisely who did it. We are certainly hopeful that she will. What happened with the vote counting this month and at the polling places in Detroit and the polling places in Philadelphia and so much else actually matters. It matters no matter who you voted for.

Whether or not you think this election is already over, until we know the answers to those questions conclusively and we can agree on them, this country will not be united.

This article is adapted from Tucker Carlson's opening monologue on the Nov. 19, 2020 edition of "Tucker Carlson Tonight."