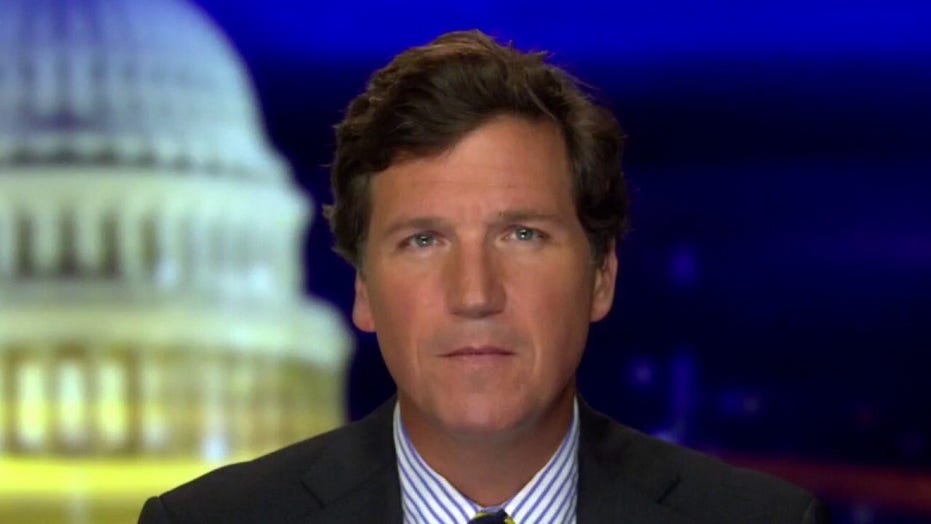 Tucker: Big Tech collecting its reward for getting Biden elected

We're told that Joe Biden is our president-elect and he will shuffle into the White House in January with something called a "mandate." If that's true, what exactly is he going to do with this mandate?

That's an interesting question, but almost no one is asking it. Instead, our news media is busy swarming Rudy Giuliani, a former mayor who hasn't held public office in decades, because he has questions about some of the voting that took place last week. Therefore, he's an imminent threat to the republic requiring blanket coverage.

But whatever you do, do not cover the guy that you claim is president. The Biden people are fine with this, by the way. They don't want to deal with the media either, so they're not. On Tuesday, Ryan Lizza of Politico noticed "[D]iscouraging signs about the Biden team and press access so far.

"[N]o regular transition briefings, no readout of calls with foreign leaders ... no open press access to the candidate and his people," Lizza wrote. "This is a break with tradition."

Of course, it is a break with tradition and it's worrisome, but you're not allowed to notice it. Biden supporters immediately screamed at Ryan Lizza to shut up. So what exactly is going on behind this news blackout veiling Joe Biden from public view? Well, pretty much exactly what you expect: They are busy rewarding the forces of repression that made these election results possible.

Guess who's first in line? You guessed it, the tech monopolies. They did their job. They shutdown one side, protected the other. And now it's time for the reward. In one of his first acts as president elect, Joe Biden named a man called Ron Klain to be his chief of staff. Now, Klain worked for Biden before and is a close ally. That's the story that you've read about why he got the job.

But that's not why he got the job. Ron Klain is also a lobbyist for Big Tech. Four years ago, he joined the executive council of Silicon Valley's lobbying arm in Washington.  Ron Klain was not chosen for his success as a public servant. We know that because last year, he acknowledged that the Obama administration, where he was a senior official, totally mishandled the swine flu pandemic, the one that came before this one.

"It’s just purely a fortuity that this isn’t one of the great mass casualty events in American history, Ron Klain conceded with admirable bluntness. "It had nothing to do with us doing anything right, it just had to do with luck.”

What's amazing is that despite uttering the above quote, somehow Ron Klain managed to become Joe Biden's advisor on the coronaviruses pandemic. And from the first day, he got that wrong, too. Here's Klain in late January, explaining that President Trump's ban on travel from China, where the virus came from, was a very bad idea.

QUESTION: Would you ban Chinese travelers from arriving in the United States?

That is to say, Silicon Valley's bottom line means you can't annoy or inconvenience China. And then Klain kept going. On Feb. 28, he tweeted this: "On #COVID-19: If you want to do something useful today, go to Chinatown -- buy a meal, go shopping. The virus attacks humans, not people of any ethnicity/race. Fear is hurting Chinese-American owned businesses, baselessly. Let's fight the disease AND let's fight prejudice."

Keep in mind, at the moment Klain wrote that, there were no attacks against Chinese-Americans because of the coronavirus, because the U.S. is a deeply decent, non-racist country. So why was he saying this? It turns out the Chinese government was saying almost exactly the same thing: If you're worried about the coronavirus, you're a bigot.

But again, it doesn't matter whether Ron Klain was right about how to handle the coronavirus. What matters is that Ron Klain is on the right side of Silicon Valley. As we've told you before, this is not an incoming presidential administration. This is a corporate takeover of the country. Joe Biden's transition advisers include executives from Uber, Visa, Capital One, Airbnb, Amazon, the Chan Zuckerberg Foundation and the nonprofit run by Google CEO Eric Schmidt. Are you surprised? No, you're not.

According to an analysis by The Wall Street Journal, at least 40 members of the Biden transition team announced earlier this week either were or are registered lobbyists. You won't be shocked to learn that the government of China looks on at all this and is highly pleased. A weak, divided America obsessed with narcissistic identity politics is good for them and very different from them.

In the United States, we're told your identity is the most important thing. They don't think that in China, in China, they think their country is the most important thing. And that's why they're winning.  On Election Day, markets in China crashed when returns showed Donald Trump leading in the swing states of Pennsylvania, Michigan, and Wisconsin. The Chinese currency plunged 1.4% against the dollar early Wednesday morning, the largest single-day drop in nearly three years. And then when the news changed, when votes started coming in for Joe Biden, the Chinese markets immediately recovered. Was there a connection? You bet there was. The Chinese government is happy now.

This is great news if you're Silicon Valley. The tech companies wanted this because they rely on cheap labor. But for the rest of us, what's the upside exactly? By the way, if you live anywhere along the U.S.-Mexico border, good luck to you. Also, don't bother locking your doors or pining for a border wall or thinking that immigration restrictions might improve your life.

EX-ICE CHIEF HOMAN: 'IT'S TERRIBLE WHAT'S ABOUT TO HAPPEN' AT BORDER UNDER BIDEN

If Democrats wind up controlling the Senate, they will give amnesty to every illegal alien in this country. That's more than 20 million people, and they'll be on a pathway to citizenship immediately. We know that because Joe Biden's already called for it.

BIDEN, SPEAKING DURING SECOND PRESIDENTIAL DEBATE: Within 100 days, I’m going to send to the United States Congress a pathway to citizenship for over 11 million undocumented people. And all of those so-called dreamers, those DACA kids, they’re going to be immediately certified again to be able to stay in this country and put on a path to citizenship.

That would be the biggest change of our lifetimes, but it's just the beginning. "Tucker Carlson Tonight" has exclusively obtained a memo from the Glover Park Group, a lucrative Washington lobbying shop with ties to Joe Biden.

Who is for this stuff? Well, America's unhappy rich ladies. They're the ones who got Biden elected, and they love this stuff. It comes at no cost to them and it makes them feel virtuous. But what policies like that do for everyone else? How does resettling refugees in the country and critical race theory make the middle class more secure, happier or richer? How does it put your kids through college?

The answer, of course, is that it doesn't. It doesn't do anything for anyone else, but who cares? Those people didn't vote for Joe Biden and they're not getting anything

This article is adapted from Tucker Carlson's monologue on the Nov. 12, 2020 edition of "Tucker Carlson Tonight."