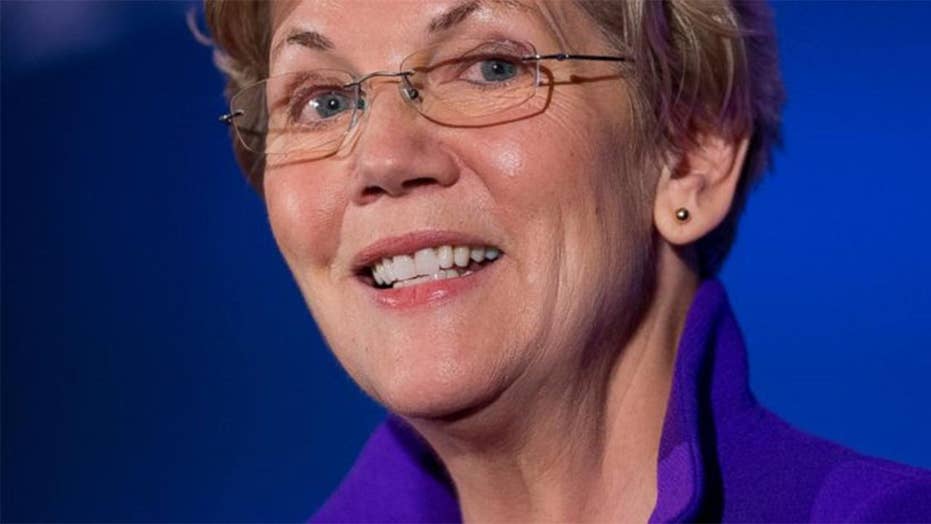 Tucker: Fauxcahontas is on the warpath

Elizabeth Warren, has claimed to be an American Indian. Now, she did this to advance her career and it worked.

Harvard Law School once boasted that Warren was the first woman of color to ever serve on their faculty. Woman of color. But Warren also used her fake Indian heritage to frame herself as somebody affected by America's sad history of racial discrimination. Warren posed as a victim because on the left, victimhood is power. Here's some of what she's said over the years. This is from an interview with a Boston radio and TV personality James Spencer Braude:

"My father's parents said, 'Absolutely not. You can't marry her because she's part Cherokee and she's part Delaware." And after fighting it as long as they could, my parents went off, they eloped. ...So, what I know about my parents is I know that in that little town they grew up in that my father's parents knew enough about my mother and her family."

Her own Trail of Tears. Well as it turned out old Liawatha couldn't come up with a single, not one American Indian in her family tree. The rest of the country laughed at her, and rightly so.

And then on Monday morning, Warren hit back at the rest of us. Out of nowhere, she produced a private DNA test that she claims confirms her story. Along with it, of course, she released a video that doubles as an ad for her presidential campaign. Here is an excerpt from an interview with a Stanford DNA expert:

WARREN: Now, the President likes to call my mom a liar. What do the facts say?

UNIDENTIFIED MALE: The facts suggest that you absolutely have a Native American ancestor in your pedigree.

Well, so the Senator concedes that she's not "enrolled in a tribe." You may have guessed that. That fact is settled in any case. But what do the test results that she's produced actually say?

Well, according to Warren, she may have had one unnamed and still unidentified Indian ancestor, not necessarily from North America by the way, eight or so generations ago potentially. Now, that could make her less than 1/1000th American Indian, that's about roughly as American Indian as virtually every white person you've ever met, which is to say not American Indian at all.

So, don't count on running into Elizabeth Warren at the next meeting of the tribes. But do count on her to keep pretending that she's somehow the spokeswoman for indigenous peoples everywhere. Warren has appointed herself head of the #MeSioux movement.

Here's this recent statement: "Native communities have faced discrimination, neglect and violence for generations. And Trump can say whatever he wants about me, but mocking Native Americans or any group in order to try to get at me? That's not what America stands for."

Now hold on a minute. Who's mocking Native Americans?

Well if anyone's doing that, it's Elizabeth Warren. She's the one who's stolen their identity and leveraged their suffering to climb the greasy pole of our fake meritocracy.

No High Plains whiskey trader ever acted with more ruthless cynicism than she has, and actual Indians are disgusted by it.

The Cherokee Nation just this afternoon released a statement. They called Warren's claims inappropriate and wrong. "It makes a mockery out of DNA test and its legitimate uses while also dishonoring legitimate tribal governments and their citizens." In other words, it's bad for Indians so, looks like that backfired.

But DNA tests aren't really the point. And we should remember that. It doesn't matter if Fake-ajawea is 1 percent Indian or 90 percent Indian. DNA should never matter except if physicians treating inherited illnesses. Your bloodline should not dictate who you vote for, what job you get, where your kids go to school, whether you get promoted or anything else.

A ruling class sends the opposite message. They believe in a racial spoil system. They tell you that your immutable traits, the ones that you had absolutely nothing to do with, are the most important thing about you. That is the very definition of racism. It's also a dangerous course for a country to take, especially right now.

Increasingly, researchers know much more about DNA and the role that it plays in human life. It's not hard at all to imagine a society that degenerates into pure genetic determinism with factions squabbling for entitlements based on their genes.

It's already happening in Brazil where race tribunals measure people's skull shapes to see if they qualify for affirmative action. Other countries throughout history, as you may have read, have done similar and horrifying things.

Do you want to live in a place like that? No, thanks.

Better to stick to our ideals where we do our best, not always successfully, but we try to treat people as individuals and judge them by their behavior, what they do, and not their ancestry.

Under that system, Fraud-azuma never would have bothered to make up a fake family tree. It would have been pointless. Harvard likely would have hired someone impressive in her place. Multiply that by every institution in America, and you'd have a better country.