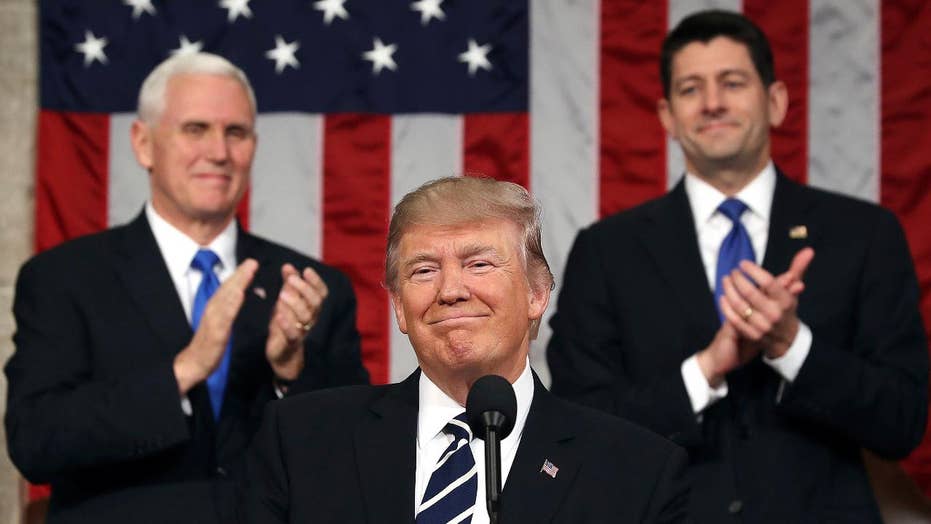 Howard Kurtz, Fox News media analyst and author of the new book 'Media Madness: Donald Trump, the Press, and the War Over the Truth,' breaks down the coverage.

President Donald Trump’s State of the Union speech was met with strong public support. Seventy-five percent of Americans approved – including 43 percent of Democrats, according to a CBS News poll conducted right after the speech Tuesday. The news media have spent nearly every second since telling those same voters why they were wrong. It was a “Groundhog Day” moment with journalists playing the Bill Murray role doing the same thing they’ve done every day of this administration – criticizing President Trump.

NBC’s “Today” Co-Host Savannah Guthrie falsely claimed Trump is “under criminal investigation right now for obstruction of justice.” And ABC News’ Chief Political Analyst Matthew Dowd was Bill Murray-esque, once again claiming, “I think we are as divided now as we were” in the 1860s.

Perhaps Dowd can point on a map the locations of widespread red and blue armies, sieges or 750,000 deaths like we had in the Civil War.

MSNBC Host Rachel Maddow pretended President Trump “wants a war with North Korea.” And her fellow Host Joy Reid went further off the deep end, depicting traditional American values in the worst way. “Church ... family ... police ... military ... the national anthem ... Trump trying to call on all the tropes of 1950s-era nationalism.” If that’s the party line on the left, President Trump can count on being in the White House another seven years.

The coverage got so bad that CBS downplayed its own polling, reporting just once that 43 percent of Democrats liked the speech and skipping it the next day. That was better than CNN, where Political Director David Chalian tried to discredit his own poll by claiming the people who watch the speech are “fans of the person giving it.”

2. A Disaster for the Media: Even a deadly train crash brought out the worst in some prominent media figures. The train carrying Republican Senate and House members to a retreat slammed into a garbage truck, killing a passenger in the truck. Some in the media couldn’t resist making wildly inappropriate jokes.

Author Stephen King tweeted: “A trainload of Republicans on their way to a pricey retreat hit a garbage truck. My friend Russ calls that karma.” He added he was “sorry” one person died and later apologized for his hateful comment.

The Daily Caller’s Amber Athey compiled a nice list of the embarrassing statements. The Daily Beast’s Sam Stein asked: “Did they stage this metaphor?” He later erased the “insensitive” tweet. CNN commentator Keith Boykin referred to the accident as a “metaphor for American politics.”

CNN regular guest Jonathan Tasini, who the network calls a “Democratic strategist,” was thrilled by the accident and Rep. Trey Gowdy’s announced retirement. “Wow, btwn train full of Goopers hitting truck and this, God is working hard today to clean up the stink. Thank her. #TreyGowdy,” he tweeted. Tasini was mentioned by CNN 30 times in the past year, according to Nexis.

3. Media Struggle With #MeToo: “Morning Joe” long ago turned on Trump and has used almost any attack it could to discredit the president or his administration. Even that has limits.

Gossip troll/”Fire and Fury” author Michael Wolff took his act to the program on Thursday and got a rude awakening. That outlet wouldn’t tolerate him implying the U.N. Ambassador Nikki Haley is having an affair with Trump. Wolff tried to dance around it, despite having said Haley “seems to have embraced” the rumor that he started, according to The Washington Examiner.

MSNBC Host Mika Brzezinski didn’t let Wolff pretend he wasn’t tied to the rumor. When he hemmed and hawed, she stopped the segment and kicked him off air. “I'm sorry, this is awkward, you're here on the set with us, but we're done. Michael Wolff, thank you,” she concluded.

Wolff went off on her and her co-host on Twitter later, saying Trump was right in his many criticisms of Mika. He then added, “It really would be hard to gossip more eagerly off camera than Mika and Joe gossip.”

Brzezinski wasn’t Haley’s only defender in the press. New York Times editor and writer Bari Weiss called out the media for “slut-shaming” and added that when Haley was “smeared with the most base, sexist lie, it’s met with little more than a collective shrug.”

Haley needed the help after the Grammys credentialed Wolff’s book with a celebrity reading that included has-been politico Hillary Clinton. Matthew Dowd, who pretends to be “independent,” slammed Haley for calling the book reading “trash.” He then called on her to “have some integrity,” apparently lacking any understanding of the word’s meaning.

MSNBC Host Stephanie Ruhle attacked Haley for daring to criticize the Grammys when the award show staged the reading of Wolff’s much-questioned book. It was as if Ruhle ignored the left-wing rumors of the affair and acted shocked that Haley would object.

That wasn’t the only disastrous sex harassment problem the media were coping with. Former Boston Globe staffer Hilary Sargent skewered the paper for being unwilling to talk to ex-employees about its problems. She tweeted out a series of criticisms including this perfect one: “If you don't treat your colleagues who allege harassment and assault with the same respect as you treated the victims of abuse by the Catholic Church, then Spotlight was just a blip. It should be who you all are, through and through.”

“Spotlight” won three Oscars, including Best Picture and Best Supporting Actor, for attacking the Catholic Church for how it handled a sex scandal. Apparently, Globe management never watched it.

4. ‘Law & Order: SVU’ Portrayed a Conservative Pundit Getting Raped: Forget the hate that the left reserves for the right during award shows. They really abuse conservatives the rest of the time. This week, in an episode naturally titled “Info Wars,” the far-left crime drama made a conservative woman the victim of a horrible rape.

Imagine the media outcry if they misrepresented liberal beliefs and then depicted a prominent liberal being sexually assaulted. It’s a reminder of just how despicable Hollywood has become.