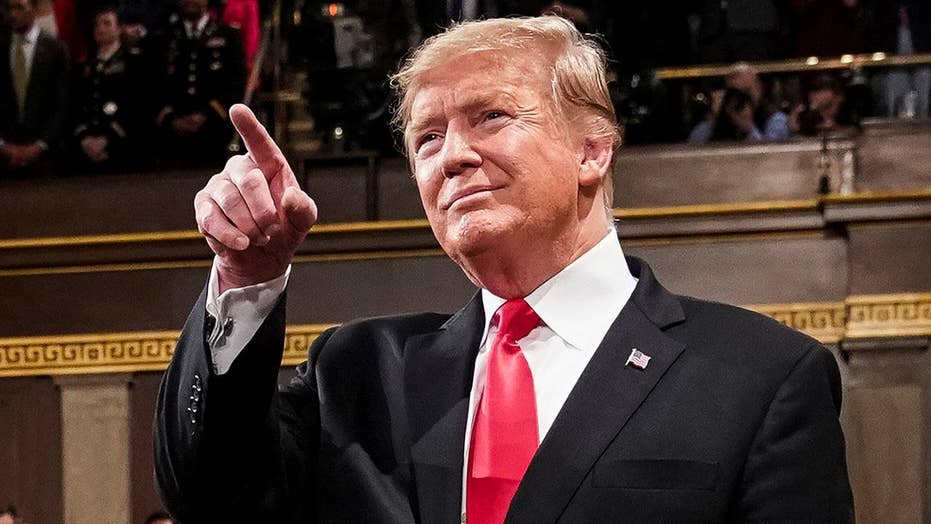 State of the Union by the numbers: President Trump interrupted 98 times by applause

“Our brave troops have now been fighting in the Middle East for almost 19 years,” President Trump said in his State of the Union address Tuesday night. “Great nations do not fight endless wars.”

And on Sunday in an interview on CBS before the Super Bowl, the president struck a similar theme.

“We've been fighting for 19 years,” President Trump said. “And it's time (to stop). And we'll see what happens with the Taliban. They want peace. They're tired. Everybody's tired,” he continued. “I don't like endless wars. This war, what we're doing, has got to stop at some point.”

TRUMP'S STATE OF THE UNION ADDRESS WASN'T ABOUT POLITICS, IT WAS ABOUT DOING WHAT'S RIGHT FOR THE COUNTRY

In thus giving voice to the national weariness nearly two decades of war has engendered, President Trump made a compelling case for bringing U.S. troops home from the greater Middle East and turning a new page in post-9/11 foreign policy.

The president rightly decried the ludicrous suggestion from some Senate Republicans that ending U.S. intervention in Afghanistan and Syria would be “precipitous,” listing in compelling terms the high price in blood and treasure these lengthy – and in many ways futile – conflicts have exacted.

But elsewhere in his State of the Union speech, Trump’s message was rather more muddled. We’re leaving these endless wars, the president said – but we’re staying, too, and we just might escalate again, including against new targets like Iran.

President Trump described a plan to scale down the American footprint in the greater Middle East without making a clean break. But there is a very real risk of mission creep and fresh regional conflict.

This inconsistency is not surprising coming from this administration, which – as Trump noted – was built on a campaign condemning the reckless interventionism of its two immediate predecessors. Yet in practice, the Trump White House has tended to maintain or even expand those very failures.

Whether because of warring impulses in the president himself or the creeping influence of “permanent Washington” – which favors an interventionist stasis on both sides of the aisle – the Trump administration has too rarely given new answers to the important questions it has raised about American foreign affairs.

In Iraq, Trump has not outlined plans for any major shift – or at least, not a shift toward an end to conflict. His State of the Union address mentioned Iraq only in passing, and in his CBS interview Sunday he envisioned an apparently permanent American presence in Iraq to surveil and potentially strike Iran.

This proposal is incongruent with Trump’s own push against endless warfare; it forgets the United States’ unparalleled ability to monitor Iran from afar, while increasing the chance of a new (and inevitably lengthy) fight.

But in Afghanistan and Syria, at least, real change is possible. In the last two months, Trump has proposed a partial withdrawal of U.S. forces from Afghanistan and a total withdrawal from Syria.  And U.S. special envoy to Afghanistan Zalmay Khalilzad last week reported a major breakthrough in peace negotiations with the Taliban.

But American disentanglement from both countries faces obstacles. In Afghanistan, there is the real possibility diplomacy will not go as desired. The framework deal Khalilzad announced is promising, but there are many details and disagreements yet to be resolved.

The framework deal would trade a U.S. departure from Afghanistan for the Taliban’s pledge to keep Afghanistan from ever again becoming a haven for terrorism against the United States. Other sticking points – like the eventual inclusion of the Afghan government in the talks with the Taliban – might undermine this progress.

With Syria, the threat to extrication lies closer to home. Inveterate interventionists within the White House (like National Security Adviser John Bolton) and Congress (such as South Carolina Republican Sen. Lindsey Graham) have been furiously pumping the brakes ever since Trump announced his aim to withdraw U.S. troops.

Bolton declared there will be no exit absent the unlikely event of Turkey promising safety to Kurdish fighters who Ankara considers to be terrorists. Meanwhile, Graham claimed to have wrested from Trump a promise to complete a panoply of perpetually extensible projects before removing American troops.

The indefinite delays to withdrawal these obstacles could produce must be avoided. Although he may get bogged down in the details, Trump’s overarching contention is correct: It’s time for these wars to stop, whether or not favorable terms of exit can be negotiated.

Diplomacy like Khalilzad’s is good and prudent, but its success is not required for American participation in these conflicts to end.

The last two decades, writes Harvard’s Stephen M. Walt in Foreign Policy, have shown what happens when Washington has erroneously “convinced itself that it was both necessary and possible to spread U.S. values to a lot of foreign societies, including some places that had never been democratic, did not much like the United States, and that Washington didn’t understand at all.”

The results of this mistaken assumption about the purpose of American military might have been disastrous, as the stagnation and unintended consequences in Afghanistan especially make all too clear.

Now we must recognize the truth: that our position is, in Walt’s words, one of strategically dangerous “overextension and overcommitment,” and that prolonging our involvement in these ill-advised wars and nation-building misadventures will only make matters worse.

The Trump administration should pursue a complete military withdrawal from Afghanistan and Syria, not half-measures that make backsliding into renewed conflict all too easy.

After all these years, ending unnecessary, costly and counterproductive missions is not precipitous. It is overdue.

Bonnie Kristian is a fellow at Defense Priorities and weekend editor at The Week. Her writing has also appeared at Time Magazine, CNN, Politico, USA Today, the Los Angeles Times, Relevant Magazine, The Hill, and The American Conservative, among other outlets.