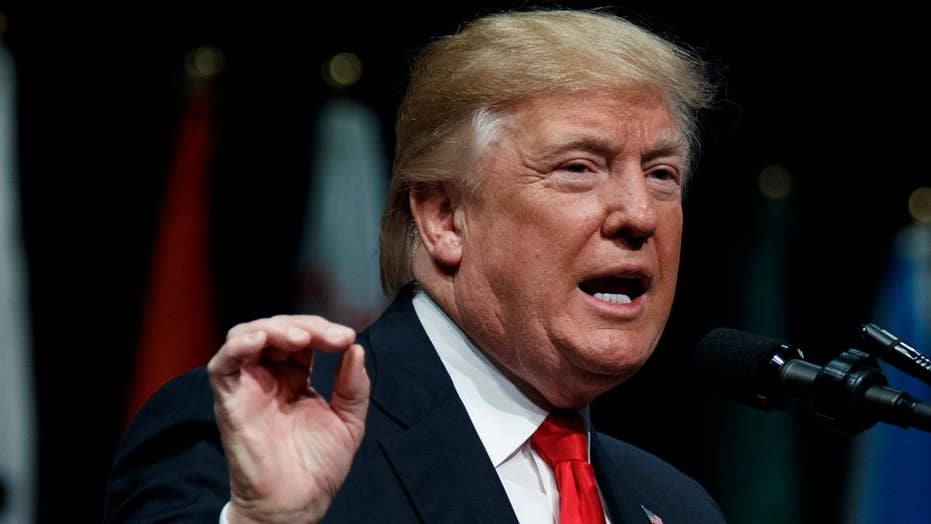 The president reiterated his backing despite slamming the agency for apparent bias in the Clinton email investigation and ongoing Russia probe; Kevin Corke has more for 'Special Report.'

As a presidential candidate, Donald Trump praised the virtues and sacrifice of law enforcement officers in his many campaign speeches. To beleaguered cops, the president’s inauguration signaled the welcome end of eight years of unwarranted criticism from the Obama administration.

In the President Trump’s Joint Address to Congress, he cautioned against the path followed by President Obama. The new president said that Americans “must work with, not against – not against – the men and women of law enforcement. We must build bridges of cooperation and trust – not drive the wedge of disunity.”

President Trump added: “Police and sheriffs are members of our community.  They're friends and neighbors, they're mothers and fathers, sons and daughters – and they leave behind loved ones every day who worry about whether or not they'll come home safe and sound. We must support the incredible men and women of law enforcement.” I couldn’t agree more.

The applause from the assembled legislators would have been drowned out by those in law enforcement circles. Police had long been on their post-Ferguson heels after events involving the questionable use of force were pounced on by a race-focused president and a complicit media.

Rejecting those divisive narratives, President Trump shifted the nation’s focus to the rising number of violent crime victims. President Trump recognized the sacrifice of law enforcement in ways his predecessor refused to do, like ordering the White House bathed in blue during National Police Week.

In the months since, the president has responded to the crisis of opioid abuse and fatal overdoses by declaring a national health emergency. Expressing a determination to save lives, his public health approach to the problem muted natural critics who mistakenly assumed he would default to the “lock-em-up” tactics used during the crack epidemic of the 1980s and early 1990s.

However, detractors are now suggesting the public health approach is itself racist, because predominantly white opioid abusers will escape the black “mass incarceration” of the criminal justice system of two decades ago.

President Trump’s pick for attorney general – Alabama Republican Sen. Jeff Sessions – has proven a stalwart asset, even while weathering Trump criticisms for his recusal from the ongoing Russia investigation.

Over the summer, President Trump and Sessions reversed Obama-era policies including those restricting the use of life-saving surplus military equipment by law enforcement. Within weeks, the value of that equipment was again evident as police responded to horrific active shooter tragedies in Las Vegas and tiny Sutherland Springs, Texas.

President Trump’s “America First” border policies have faced a barrage of challenges, including federal lawsuits to prevent their implementation. He’s endured the slanderous lie that he’s hate-filled and anti-immigrant.

The president’s commitment to secure our borders is now showing the intended consequence of reducing illegal border crossings. Recent Department of Homeland Security reports show arrests at the border at a 46-year low, with a 25 percent reduction from 2016.

The president responded to the incomprehensible loss of a child to a violent felon who shouldn’t be loose on American streets. He channeled the sentiments of millions about the sickening killing of Kate Steinle by a criminal illegal alien given refuge by San Francisco.

President Trump was right in rejecting the notion that jurisdictions that turn a blind eye to criminal illegal immigrants somehow make America safer.

The president will have much to do in 2018. His messaging to law enforcement is a solid first step, but faith and words need follow-up.

Our border is still too porous. Department of Homeland Security agencies tasked with shoring it up need people and resources – fast.

And the president needs to lean on the Senate to move bills like Kate’s Law and the No Sanctuary for Criminals Act, while preparing for battle in the federal courts when liberal jurisdictions challenge steps toward responsible immigration enforcement.

Meanwhile, the president and attorney general need to press the attack on savage gangs like MS-13, whose ranks are fed by the pipeline of illegal immigration.

Finally, we’ve again witnessed the specter of terror in America. Responding to the ISIS siren song, foreign-born actors executed terror attacks in our best-protected city. Eight innocents were fatally mowed down and a dozen injured in New York City’s deadliest attack since 9/11 and a second attacker detonated an improvised explosive device in midtown Manhattan.

The terrorist strikes fed the debate over the proper limitations on the federal Foreign Intelligence Surveillance Act “702” intelligence collection authority, which is up for renewal.

President Trump can’t afford to rest on his words of support for law enforcement.  He’s had an impressive, welcome start but dealing with law enforcement issues is a marathon, not a sprint.