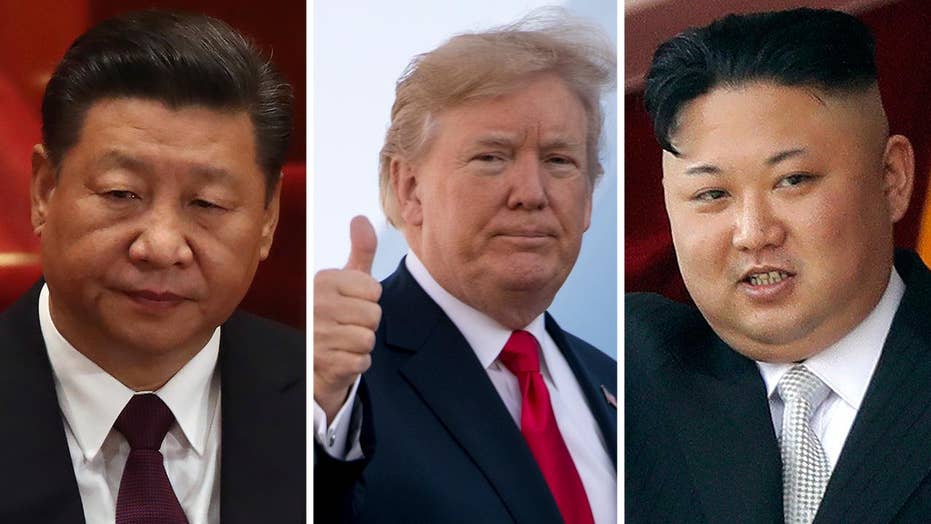 North Korea, China to be top subjects of Asia trip

President Donald Trump flew to Hawaii on Friday before embarking on a 12-day trip to Japan, South Korea, China, Vietnam and the Philippines. The trip gives him a key opportunity to change the direction of his administration at a time when the media is obsessed with investigations of Russia and his presidential campaign.

The president should use this trip, which includes two international summits, to lay out a clear foreign policy strategy at a time when things back in Washington are bogged down in partisan combat. A strong performance in Asia could show the world – and most importantly President Trump’s critics – that the president belongs on the international stage.

The art of smart, well-reasoned and strategic foreign policy begins and ends with setting realistic priorities, assigning realistic goals and seeing them through to their logical conclusion.

It’s important for President Trump to avoid the mistakes of President Barack Obama, who blundered into making commitments he could not keep, overly extended the United States, and concocted pie-in-the-sky slogans – like the fictional “pivot” to Asia. Following the Obama example would be a recipe for disaster.

What President Trump promised the American people – to the shock of the foreign policy establishment – was something very different from the Obama foreign policy.

While he never proclaimed a formal “Trump Doctrine,” candidate Trump called for an America First foreign policy that would make serving America’s own national interests his top priority.

For me, this translates to mean ending nation-building and the promotion of democracy at the barrel of a gun. It means a return to focusing on the great game of power politics in foreign policy.

America First means we should seek compromise and cooperation with nations like Russia and China if it is in our mutual, shared interests and oppose any nation that tries to undermine our objectives. It means that if America is under grave danger we should respond – with overwhelming force if necessary.

But most importantly, those of us who firmly believe in a more realist and restrained foreign policy hope America First means ending once and for all the era of toppling regimes that we have no conceivable way of putting back together.

If the above is a good representation of America First, then that means the Trump administration must turn its attention in a realistic way to Asia – a vital region where we face immense challenges.

To respond to a nuclear-armed North Korea led by a dictator who threatens to use his weapons of mass destruction, President Trump needs to reassure our Asian allies that we will honor our commitments to them, and set the stage for North Korea’s containment.

Focus on North Korea.  The American people once again are facing a mortal enemy with nuclear weapons that could, at least in theory, hit the U.S. homeland – and we are unsure of what direction to take. President Trump must rally our allies of South Korea and Japan to the cause of containing and deterring the North Korean threat, because there is no military option that can wipe out Pyongyang’s nuclear weapons with certainty.

This means we need even stronger multilateral economic, diplomatic and financial isolation for Pyongyang, to limit its ability to add to its nuclear and missile arsenal. And it also means building up allied missile defense and conventional strike capabilities in the face of the North Korean thereat.

Make few threats, focus on policy and listening: While President Trump has made clear he will not tolerate a nuclear North Korea and aggression by the Communist nation, his use of Twitter to trade insults and threats with dictator Kim Jong Un is becoming increasingly unhelpful. This only legitimizes Kim.

President Trump should be working full-time on a strategy to push back against Kim’s nuclear and missile capabilities. Unfortunately, words aren’t going to stop Kim from testing more nuclear weapons or advanced missiles – or starting a war. Only smart policies have a shot of taking away the resources Kim needs to achieve his goals. When President Trump touches down in Asian capitals he should spend as much time as possible behind closed doors listening and reassuring allies.

Make China part of the solution. North Korea can’t exist without China’s help. Beijing accepts most of North Korea’s exports and provides the regime with the natural resources it needs to survive. So when President Trump meets Chinese President Xi Jinping, he needs to reinforce the idea that China must continue its commitment to enforce United Nations Security Council economic sanctions against North Korea. This message must come with a strong warning that if China once again does not keep its word on North Korea, China will have to pay a price.

Develop a trade plan. Asia loves free trade, and diplomats and government officials across the region are still smarting over Trump’s move to leave the Trans-Pacific Partnership. Vietnam, Japan and other nations looked at TPP as not just a trade deal, but rather an assurance that America was committed to a stable and balanced Asia-Pacific region.

These nations also saw TPP as sending a strong message that China – no matter how powerful it became – would always be faced with a strong economic as well as strategic, American presence. TPP, and its commitment to free trade, brought some of the most dynamic Asia-Pacific nations into an economic pact that was seen as a way to strengthen ties with Washington.

How will President Trump replace this trade pact? Will he work on bilateral trade deals with say Japan, Vietnam or others? Or, will misguided protectionism and trade barriers go up all over the region, hurting workers and business all across the Pacific? If President Trump acts boldly, he can work to push a free trade agenda that unites and binds the region together but is fair to American workers as well.

Let there be no doubt, President Trump faces a tall task ahead of him on his Asia trip. But with a little dose of realism, a little pragmatism and some luck he can come home with a big win under his belt.